Chef Daniel Bader grew up here on Maui, and understands the importance of supporting our island home through charitable efforts like Restaurant Week Wailea. A portion of every prix-fixe menu sold during the promotion goes to benefit the Maui Food Bank.

“Being in Wailea here, and a lot of the hotels, I think it’s good to give back to the community in that sense, says Bader, who has worked at Ruth’s Chris Steak House in Wailea for more than 10 years.

It’s among 20 restaurants taking part in Restaurant Week Wailea from Sunday, Nov. 4 to Saturday, Nov. 10, when you can enjoy top-notch, three-course, prix-fixe menus from between $29* and $59* per person (*depending on the restaurant – beverages, tax and gratuity not included). Many restaurants enhance this promotion with intriguing wine pairings to savor with your meal, at a very special price.

Here are the participating establishments:

You can also visit Open Table for reservations with participating restaurants (*).

With a longtime presence at The Shops at Wailea, Ruth’s Chris Steak House has been involved in Restaurant Week Wailea since it began nine years ago. Here’s a look at their special menu, available for $49 per person:

“We built a little lounge area in the bar to separate that from the dining room,” explains Bader, “so if people want to come in and watch the game, we put a wide-screen TV in there for people to enjoy.”

They not only increased capacity in the bar, but also expanded their happy hour, which now starts at 4 instead of 5 p.m.

“Happy hour goes 4 until 7,” he says. “We are in the process of revamping our happy hour menu to put some more choices on there.”

Restaurant Week Wailea is a popular twice-yearly promotion, and the prix-fixe menus are not valid with any other discount, coupons or promotion being offered at participating restaurants. Diners can contact each restaurant directly or visit Open Table to make reservations in advance, which are strongly recommended.  See details and printable menus at the Restaurant Week Wailea website. 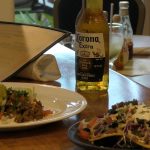 On the Menu at Maui Country Club's Cantina Night 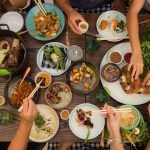 On the Menu at Lineage for Restaurant Week Wailea