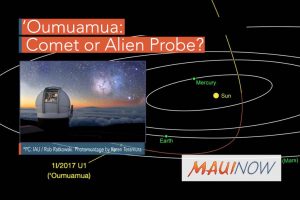 Background image: 1I/2017 U1 (ʻOumuamua), previously known as C/2017 U1 (PANSTARRS) and A/2017 U1, approaching from above, it was closest to the Sun on 9 September. Traveling at 44 kilometres per second, the comet is headed away from the Earth and Sun on its way out of the solar system. PC: International Astronomical Union. Courtesy Photo of the Pan-STARRS 1 telescope atop Haleakalā, Maui by Rob Ratkowski. Photomontage by Karen Teramura using an image of the Trifid Nebula taken with this telescope.

ʻOumuamua, the interstallar object with a Hawaiian name is drawing attention again, this time for a new theory about its origins.

Scientists with the Harvard Smithsonian Center for Astrophysics published a new study [1] discussing the origins of such an object, including the possibility that it might be a “lightsail of artificial origin, designed for interstellar travel.”

The new study challenges the object’s classification as a comet and suggests that under an exotic scenario, “‘Oumuamua may be a fully operational probe sent intentionally to Earth vicinity by an alien civilization.”

The object was discovered last year with the Pan-STARRS 1 telescope atop Haleakalā on Maui and was given the Hawaiian name ʻOumuamua [2], meaning ‘a messenger from afar arriving first.’

At the time, scientists described the object as “less than a quarter-mile in diameter” with a red surface, and astronomers said that it was moving “remarkably fast.”

According to the new study compiled by Shmuel Bialy and Abraham Loeb, “The large variations in its apparent magnitude and the non-trivial periodicity of the lightcurve, suggest that ‘Oumuamua is rotating in an excited spin state (tumbling motion), and has an extreme aspect ratio of at least 5 : 1, an unprecedented value for previously known asteroids and comets in the Solar System.”  The study suggests that if ‘Oumuamua rotates in its highest rotational energy state, “it should be extremely oblate (pancake-like).”

The study further states: “Considering an artificial origin, one possibility is that ‘Oumuamua is a lightsail, floating in interstellar space as a debris from an advanced technological equipment. Lightsails with similar dimensions have been designed and constructed by our own civilization, including the IKAROS project and the Starshot Initiative.”

The study states that, “dynamical ejection from a planetary System could result in space debris of
equipment that is not operational any more, and is floating at the characteristic speed of stars relative to each other in the Solar neighborhood.”  According to the study, “this would account for the various anomalies of ‘Oumuamua, such as the unusual geometry inferred from its lightcurve, its low thermal emission, suggesting high reflectivity, and its deviation from a Keplerian orbit without any sign of a cometary tail or spin-up torques.”

The full study is available online [3].