In this report, DBEDT revised its projection on Hawaiʻi’s economic growth downward to 1% for 2018 from 1.5% projected in the previous quarter. The downward revision mainly resulted from the recent economic data released by the US Bureau of Economic Analysis, which showed that Hawai‘i’s economic growth during the first half of 2018 was at 0.5%. 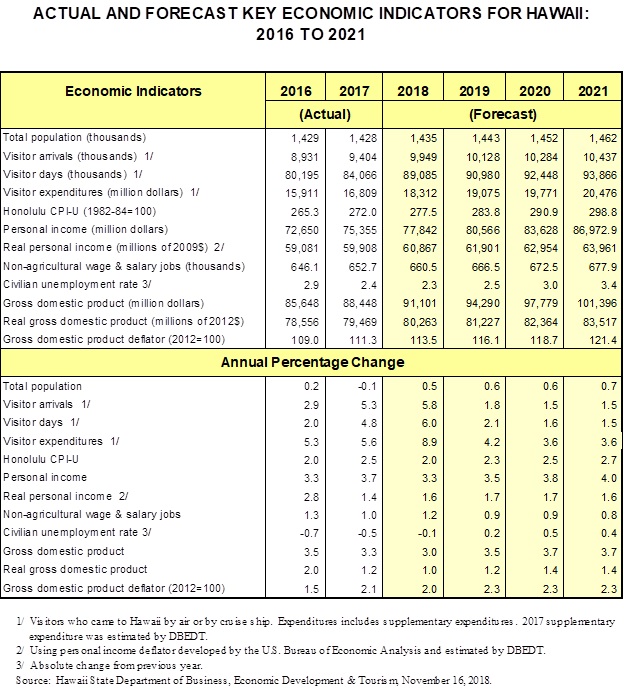 “Hawai‘i’s economy is still expanding and we see our construction industry performing well, with the value of private building permits having increased by 3.6% and government contracts awarded increased 39.3% during the first three quarters of 2018,” said DBEDT Director Luis P. Salaveria.

Non-agriculture payroll jobs increased by 10,900 during the first 10 months of 2018. The leisure and hospitality sector accounted for 46.8% of the jobs gains with 5,100 jobs added. Healthcare and social assistance and professional and business services each added 2,400 jobs during the same period. A few industries experienced job losses, which included state government (-600 jobs), retail trade (-400 jobs), manufacturing (-300 jobs) and information (-200 jobs).

“According to the airline schedule available so far, scheduled air seats to Hawai‘i during the first nine months of 2019 will increase by 0.3%, which leads us to expect about 1.8% arrival growth in 2019,” said Chief State Economist Dr. Eugene Tian. “The growth of visitors will be mainly coming from the U.S. market because air seats on international flights are expected to decrease during the first three quarters of 2019.”

The most recent economic forecasts by more than 50 top economic research organizations released a report on November 10 indicting that the U.S. and world economies will experience steady growth in 2018 and 2019, and the U.S. economy will experience accelerated growth at 2.9% in 2018 and 2.6% in 2019. Hawaiʻi’s economic growth rate will be lower than that of the nation, as well as lower than the average Hawaiʻi economic growth rate of past 30 years at 1.8%.

Below is a list of revisions DBEDT made for their new analysis:

DBEDT kept the projection for consumer inflation, as measured by the Honolulu Consumer Price Index, the same as previously projected, at 2% for 2018, and will gradually increase to 2.7% by 2021.

The DBEDT Quarterly Statistical and Economic Report contains 136 tables of the most recent quarterly data on Hawaii’s economy as well as narrative explanations of the trends in these data.

The full report is available at: dbedt.hawaii.gov/economic/qser/. 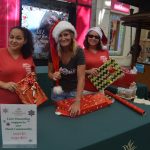 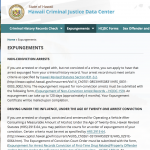