New video of Sunday’s deadly officer-involved shooting in Wailuku was released at a press conference today at the Wailuku Police Station. The 23 second encounter at the Kaohu Street, South Market Street intersection, came following a chase that ensued for approximately 12 minutes.

LIVE STREAM: Maui Police Press Conferece – Dec. 24, 2018Details: http://mauinow.com/?p=290167A fugitive was shot and killed following a police chase on Maui that ended in gunfire at the intersection of Kaohu and South Market Street on Sunday morning.Kaulana “Toji” Reinhardt, 26, died after transport to the hospital after the exchange of gunfire with police.More at the link above.

At today’s press conference, Maui Police Chief Tivoli Faaumu extended his condolences to the families affected by the circumstances. “The hard working men and women of the Maui Police Department want to make sure they keep the interest of public safety in mind everyday as they come to work. Please be assured that our officers are here to protect everyone with integrity and compassion as demonstrated by the actions yesterday,” said Chief Faaumu who thanked the public for their assistance with the investigation.

Acting Assistant Chief Clyde Holokai said the incident yesterday culminated in a several week-long investigation in which Kaulana “Toji” Reinhardt was the subject of an first degree attempted murder investigation that occurred on Dec. 15, 2018.

“Because of the threat that he posed to the community, we actually put together a team to go ahead and make a proactive investigation and go out and try to find him before he could hurt anyone else,” said Acting AC Holokai. “Unfortunately, yesterday happened, and what we want to do is bring some light to this situation and share with everybody what we have today with the body cam video of an officer that was involved in the shooting.”

Detective Matthew Bigoss shared three different body camera videos: one in real time, and two that were slowed down to show what officers experienced on the scene. Police say the audio was removed from the video due to harsh language that was used on the scene. Where possible, police also blurred out the faces of individuals due to the ongoing nature of the investigation.

On the video, officers are seen providing care by putting on medical gloves and administering care with an AED device.  On one of the slow motion videos, police explained that the suspect and Officer No. 1 were involved in a struggle and the video is slowed to show the approximate time at which the first shots were taken.  The video then shows Officer No. 2 firing at the suspect.  As the suspect goes down, police say there is a silver and black handgun that went under the suspect’s body.

Police say the incident started at around 10:35 a.m. on Sunday, Dec. 23, 2018 in Makawao when police observed the suspect vehicle and ran plates. Police later located the vehicle in Kahului on the right shoulder of the Hāna Highway but did not initiate pursuit until officers were able to saturate the area.

The suspect vehicle was involved in a motor vehicle collision near the Kings Cathedral at the intersection of the Maui Veterans Highway and Puʻunēnē.  Police say the vehicle turned onto Puʻunēnē Avenue, made a left onto Wākea and proceeded through town.  The pursuit ended up in Wailuku where the shooting incident occurred near the intersection of South Market Street and Kahou Street near ʻĪao Elementary School.

Police could not say how many rounds were fired, what type of weapon was used, if the suspect weapon was stolen, or how fast the suspect or police were driving during the pursuit.

The two officers involved in the incident were placed on administrative leave, which is standard procedure, according to Maui Police Lt. Gregg Okamoto. The criminal and internal investigations into the incident are running concurrently.

According to Lt. Okamoto, the use of body camera imagery is fairly new to the department and the case is considered under an ongoing investigation. Further information is pending release. 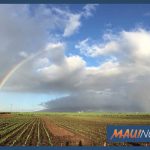 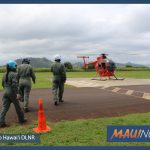