This Sentry Tournament of Champions Hot Sheet recaps how each player earned his way into the field of the exclusive winners-only event at The Plantation Course at Kapalua, Jan. 2 to 6, 2019.

Is exactly what Matt Kuchar said after he captured his eighth PGA TOUR title at the Mayakoba Golf Classic in just his second start of the 2018-19 season.

Taking a four-stroke lead into the final round, Kuchar made this win an interesting one after bogeys on Nos. 14 and 15 allowed Danny Lee to pull within one shot.

The 40-year-old remained calm and made par on Nos. 17 and 18 to win by one stroke to seal the victory. The taste of sweet victory came at the end of what had been a disappointing year by Kuchar’s lofty standards in which he finished out of the top 70 of the FedExCup standings for the first time since 2007.

For Kuchar, the bright side to ending the four-year, winless drought means one thing: a return trip to The Plantation Course at Kapalua, which will mark Kuchar’s seventh appearance at the Sentry Tournament of Champions. Needless to say, Kuchar was psyched, and we are, too.

Xander Schauffele converted three consecutive birdies on his way to capture his third PGA TOUR victory and first World Golf Championships title in a playoff at the WGC-HSBC Champions in Shanghai, punching his ticket to Maui as he looks to improve on his T22 finish in his first appearance in 2018.

Schauffele began the final round three strokes behind Tony Finau. The Class of 2011 member went on to card two birdies on his last two holes in regulation to force a sudden-death playoff with Finau, where a two-putt birdie from about 30 feet on the par-5 18th was enough to seal the deal. Oh, and did we mention he began the week celebrating his 25th birthday? #CherryOnTop

After the win, Schauffele couldn’t help but smile knowing he’d be returning to The Plantation Course at Kapalua for the second-consecutive year.

3. Bradley Back to Maui

Keegan Bradley didn’t let downpours a little rain stop him from capturing his first PGA TOUR title since 2012 on a Monday finish at the BMW Championship in September.

The four-time TOUR winner qualified for a return trip to the Sentry Tournament of Champions when he held off Justin Rose in a sudden-death playoff. The 32-year-old entered the final round trailing Rose by three shots but came from behind to win (as he did in each of his first three wins #ComebackKid) when he made par on the first extra hole to seal the victory.

Bradley’s return to The Plantation Course at Kapalua will mark his first trip back since 2013, where he finished a career-best T4, as well as his first family trip to Maui.

For more information about the Sentry Tournament of Champions visit the PGA Tour online. 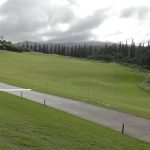 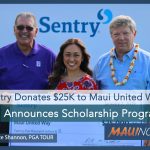