Work will begin this week on a Maui County project to repave five streets in Wailuku and five in Kahului, the Department of Public Works announced.

Contractor Maui Kupono Builders LLC is scheduled to start the $522,600 project on Tuesday, Jan. 22, according to the department. Work is targeted for completion on in mid April.

The contractor’s working hours on most of the roadways will run from 8:30 a.m. to 3:30 p.m. Monday through Friday, except holidays. For streets in the Kahului industrial area, work hours will be from 8 p.m. to 5 a.m. 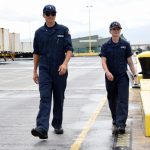