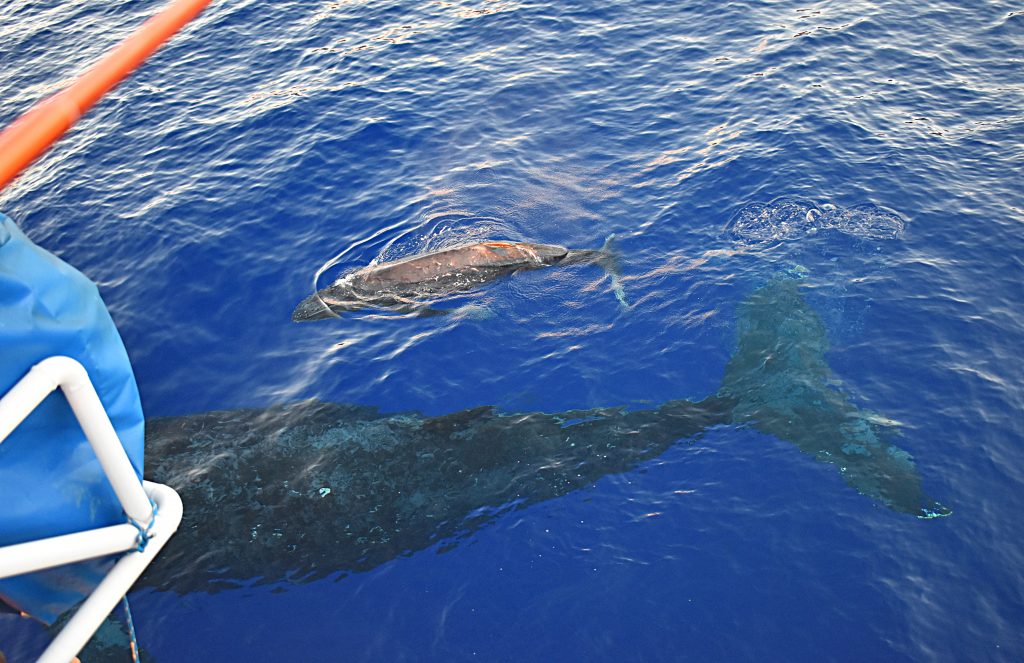 A Kīhei resident on a sunset cruise on the Calypso out of Mā‘alaea didn’t notice until she arrived home that the humpback calf she captured in a photo had apparently sustained an injury.

“When the two whales approached and went right under the boat, I snapped the picture,” said Kerra Mishler.

“I didn’t notice anything until I went back and zoomed in on my photos,” Mishler said. “But it appears that the newborn survived a possible shark attack.”

The photo shows a wound on the calf’s lower back.

She said the mother and calf swam close to the boat during the Monday, Feb. 25, 2019, cruise outside Mā‘alaea Harbor in Mā‘alaea Bay.

The captain said the calf must have been only a few days old.

Natural Resources Management Specialist Edward Lyman of the Hawaiian Humpback Whales National Marine Sanctuary in Kīhei said that after inspecting the photo, he thought it was more likely that the wound resulted from interaction between the calf and a vessel.

“It looks like wound that could be caused by an outboard skeg or a vessel fin propeller,”  said Lyman. “Calves are particularly vulnerable to getting hit by the boats, likely due to their inexperience, but also their small size and behavior of coming to the surface more often, sometimes without the mother.”

Lyman stressed that it is very helpful to have these sightings reported. He said reports by members of the tour industry and the general public are extremely valuable to the sanctuary and others who monitor the humpback population for viability and risks.

“Using this case as an example, ship-strikes are a concern,” said Lyman. “It is one of the threats that we would like to monitor.”

The best number to call when a humpback whale, monk seal or other marine animal is observed to be entangled, injured or in jeopardy, is the NOAA Hotline at (888) 256-9840.

“People should definitely call, since it is the best way to help the animal,” Lyman stressed.

He said that by reporting an incident, HHWNMS not only has the opportunity to assist that animal, but also assist many more animals by gains gaining information that might help reduce the threat.

“If possible, it is a good idea to get images or video from a safe and legal distance exactly as Ms. Mishler did,” said Lyman. “It is extremely helpful.”

“In some cases, like an entangled whale that is likely mobile, it is helpful if the public and tourist
industry personnel can monitor the animal from a safe and legal distance until an authorized response team arrives,” said Lyman.

“For instance, on our last entanglement response, we had three different tour companies—Captain Steve’s Rafting Adventures, Ultimate Whale Watch and the Maui Princess—monitor the animal until we could get there to try and free it,” Lyman said. “Without their assistance, we would not have had the opportunity”.

The sanctuary coordinates large whale entanglement response around the Hawaiian Islands working with state and federal agencies, and the on-water community. The effort is authorized under NOAA Fisheries’ Marine Mammal Health and Stranding Response Program.

Lyman said he will follow up with Mishler to get an approximate location on her sighting.

“While the wound is likely not life-threatening, it could have been, and we want to learn as much as we can about these incidents,” said Lyman.

The sanctuary is located at 726 S. Kīhei Road.

For more information about the sanctuary, go online. 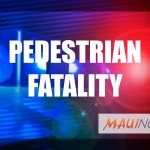 Pedestrian Dies After Being Struck by 2 Vehicles