The Commission on Water Resource Management has jurisdiction across the State of Hawaiʻi to establish and amend interim instream flow standards (IIFS) as needed to protect the public trust purposes of surface water.

At a regularly scheduled meeting in Lahaina, Maui on Nov. 20, 2018, the Commission considered a submittal to amend the IIFS for the Kahoma Hydrologic Unit. Following public testimony, the Commission approved the staff recommendation for Kahoma Stream which established an IIFS of 3.49 million gallons per day at an elevation of 1,850 ft, immediately below the diversion structure registered by Pioneer Mill (but now on property owned by Kamehameha Schools).

Officials with the state agency say this flow rate equates to an estimated 70th percentile magnitude flow. “This means that the stream naturally has less than 3.49 mgd 30% of the time. Due to natural losses in stream flow to groundwater (known as seepage loss), it was expected that a value of 3.49 mgd at an elevation of 1,850 ft would result in approximately 2.08 mgd at an elevation of 650 ft,” CWRM said.

According to CWRM, this is the elevation where the community now diverts water in an effort to restore loʻi kalo. “Therefore, the stream will naturally have less than 2.08 mgd approximately 30% of the time,” CWRM officials said in an update.

According to CWRM, when the natural flow in the stream drops below the IIFS, the operator of the diversion at 1,850 ft “should close down the intake and stop taking water as soon as possible.”

The agency reports that on Jan. 31, 2019, streamflow peaked as high as 80 mgd and on Feb. 14, 2019 as high as 75 mgd. “During these flow events, trees and boulders clogged the control mechanism used to close the intake on the diversion.”

On Tuesday, March 19, 2019, CWRM reports that the operator was notified by both the community and Commission staff that they needed to close down the intake and take zero water when the stream drops below the IIFS. As the landowner, Kamehameha Schools was also notified by Commission staff.

Both West Maui Land Co. and Kamehameha Schools were investigating reports of the stream condition on Wednesday, and stakeholders determined that storm debris, including trees and logs had clogged a ditch and measures were being taken to assure continued water flow.

The state update comes on the heels of a report from members of the group Ka Malu O Kahālāwai who say it took years of work to restore water for mauka-to-makai flow, but thousands of native ʻōʻopu have died when the stream stopped flowing on Tuesday.

“The operator understood and was working on a plan to fix the intake as soon as possible,” CWRM said in an update.

Glenn Tremble with West Maui Land Co responded to our request for comment on Wednesday about the stream conditions reported on Tuesday afternoon saying, “We have made no changes to the stream diversion at Kahoma. We have sent personnel to inspect the system.”

Kamehameha Schools also issued a statement in response to our inquiry saying:

“Kamehameha Schools wants water to be flowing through Kahoma Stream and we are currently investigating the reports about the current condition of the stream to gather all the facts and determine next steps to assure that water continues to flow through the stream.  Kamehameha Schools is grateful for community members who care deeply about our precious water resource especially as it relates to the ongoing work of restoration efforts in Kahoma.  For several years, Kamehameha Schools has proactively worked to return water to Kahoma Stream.  Traditional uses of water are important to us in sustaining the practices and cultural identity of our lāhui, and in promoting a healthy habitat of our native aquatic species.”

In a subsequent email communication on Wednesday afternoon, representatives with Kamehameha Schools said:

“Water should start flowing back into Kahoma Stream. We learned that there was storm debris that clogged the ditch at a couple of different points. Workers went in this morning and used chainsaws and shovels to remove trees and logs and then flushed out the ditch. Additional measures were taken to assure that water continues to flow.“

Commission staff works with Kamehameha Schools to operate a monitoring station at the 650 ft elevation. Mean daily flow data are provided in the summary graph below. From March 1, 2018 to March 20, 2019, mean daily flow averaged 5.22 mgd and the median mean daily flow was 3.36 mgd. 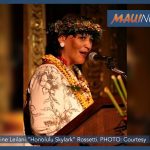 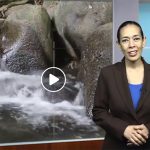