High resolution imagery from GOES-17 is showing smoke associated with a fire in Maui’s central valley this afternoon. #hiwx pic.twitter.com/q4yYY8AWEz

NO ENTRY INTO KIHEI AS OF 7:30 P.M. TRAFFIC STILL SLOW MOVING COMING OUT OF KIHEI.

PUBLIC URGED TO CALL THE COUNTY EMERGENCY OPERATIONS CENTER AT 270-7285 FOR UPDATES.

KAHULUI AIRPORT OPERATIONS BACK TO NORMAL.

KIHEI RESIDENTS NORTH OF OHUKAI ROAD ADVISED TO EVACUATE, KAMALII ELEMENTARY IS DESIGNATED SHELTER HOWEVER IT IS AT CAPACITY. SECOND SHELTER OPENED UP AT KIHEI COMMUNITY CENTER AT 5 P.M.

Maui Mayor Mike Victorino said during his 7 p.m. press conference that it appears Maui has “weathered the major part of this event.”

The Central Maui fire that closed down the airport, roads and highways is still not contained, although fire fighters will continue to monitor it overnight and resume fire fighting at first light.

Mayor Victorino said he surveyed the fire from a helicopter flyover and estimated that 3,000 acres had been consumed, with parts of it coming close to structures.

If a member of the public wants an update on the situation they can call the county at 270-7285 to speak to Emergency Operations Personnel.

Operations at Kahului Airport went back to normal prior to the press conference, according to the state Department of Transportation. A tweet sent out from the DOT Twitter account at around 6:10 p.m said that “OGG operations are normal. Those able to reach the airport safely are being served. Please call your airline before heading to the airport.”

The Kahului bound lanes of Maui Veterans Highway are now open for motorists who want to exit the Kihei area. There is still no entry point into Kihei at this time because of the smoke according to police dispatch.

Early estimates from fire officials say that the brushfire has consumed more than 1,000 acres in Central Maui. Mayor Mike Victorino said during his press conference that 3,000 to 4,000 people have been evacuated from the Maalaea and North Kihei areas.

The state Department of Transportation sent out a tweet at 3:59 p.m. saying that “flights are being diverted from Kahului Airport. Airport is currently on generator power.” Passengers also had to abandon their drive to the airport because earlier the fire prevented them from accessing roads and highways.

Prior to the roads opening up a DOT official confirmed that Kahului airport staff were planning for passengers to shelter in place at the airport or at one of the county shelters.

Maalaea residents were sent emergency notifications to evacuate at around 3:30 p.m. The county opened up a Central Maui shelter for evacuees at the War Memorial Stadium Complex in Wailuku.

North Kihei Road had been closed to traffic in both directions. For several hours there was no way in or out of Kihei according to police and fire officials.

At around 3 p.m. an emergency alert went out to residents north of Ohukai Road advising residents to evacuate.

In the meantime Maui fire fighters positioned themselves to protect the Maalaea Power Plant in South Kihei. Parts of South Maui are out of power but it is undetermined how many customers were affected according to Maui Electric.

The Maui County Emergency Operations Center opened up their first shelter at 2:30 p.m., at Kamali’i Elementary School in Kihei. It soon reached capacity with 450 evacuees and Mayor Mike Victorino announced a second South Maui shelter at the Kihei Community Center which opened up at 5 p.m.

As a precaution, the Maui Humane Society self-evacuated about “200 dogs, cats and critters” to a temporary site at the Maui High School gymnasium. Humane Society officials said a number of organizations responded to help move the animals out of the area just before 2 p.m.

“We had an amazing turnout and just loaded up the last cat,” said Maui Humane Society Marketing and Development Director Nancy Willis. “We really want to thank everyone who came down to help us move, companies came with vans and trucks and got us moving very quickly.”

The animal evacuation took place just in time, because at 2:09 p.m. the county announced that Maui Veteran’s Highway would be closing, between the Maui Humane Society and Pi’ilani Highway.

Police this afternoon closed down a majority of the Kūihelani – from Honoapiʻilani Highway to Maui Lani Parkway – while fire crews tried to contain the blaze.

The incident was first reported at around 10:48 a.m. as a brush fire on the Māʻalaea side of East Waikō Road which jumped across Kūihelani Highway. Winds fanning the flames were estimated to be blowing from 15 to 20 mph according to a Maui County press release.

The fire had grown from initial reports which had indicated it had burned a quarter acre. Ground crews are battling the blaze using personnel aboard tankers and firetrucks.  Those driving along Kūihelani Highway near the fire reported hindered visibility due to the smoke and said they could feel the heat from the flames while passing by.

Both Air 1 and Air 2 helicopters made air drops of water at the scene of the fire.

The fire fighters also received assistance in the form of bulldozers and other heavy machinery from the West Maui Land Co., Goodfellow Bros., and the Maui County Department of Public Works.

*Check back for further updates, which will be posted as they become available. If you have images or video of news happening on Maui, send it to us at [email protected] 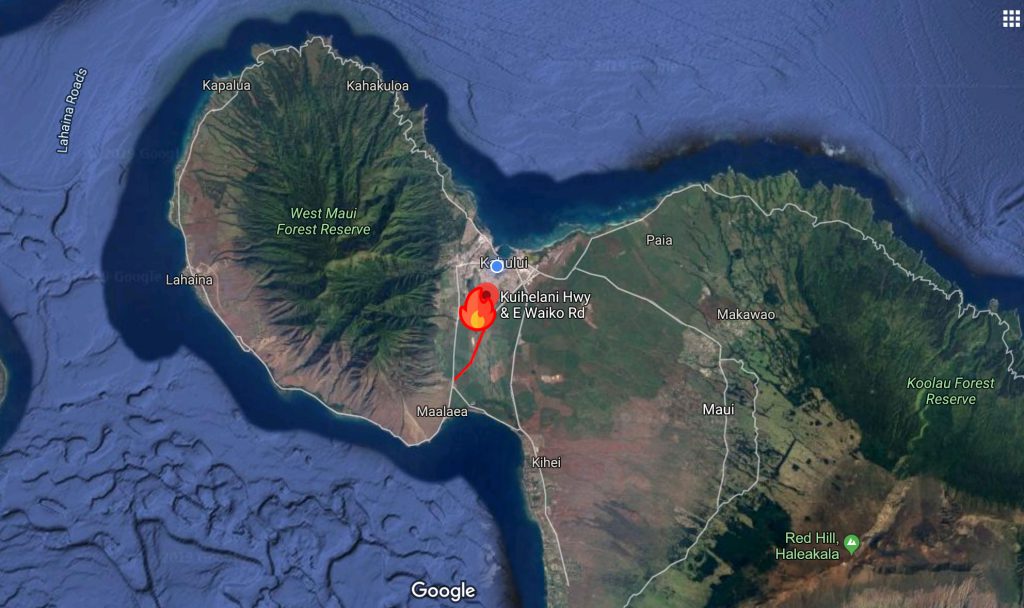 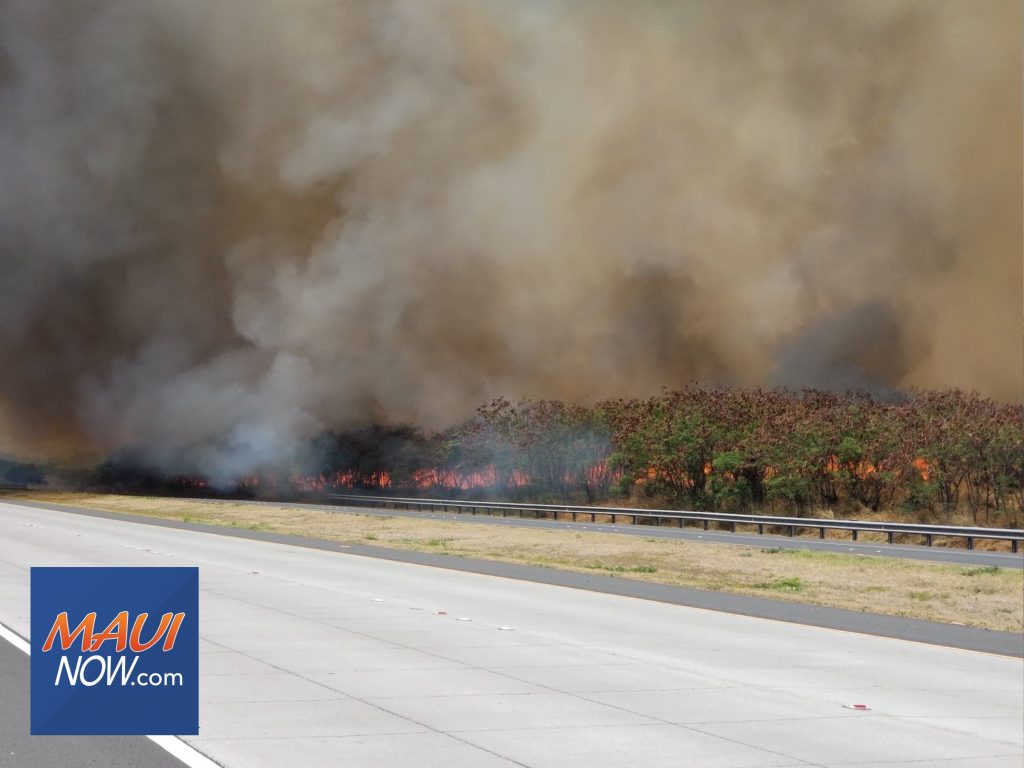 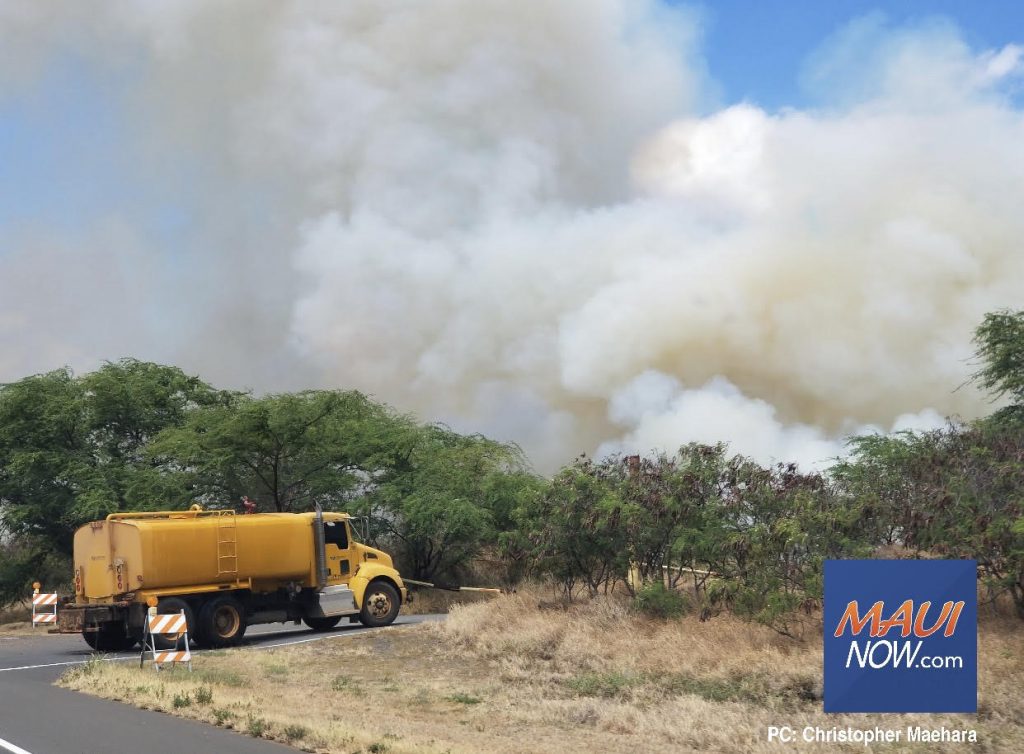 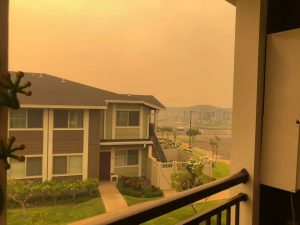 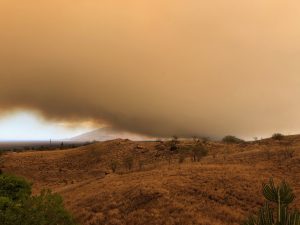 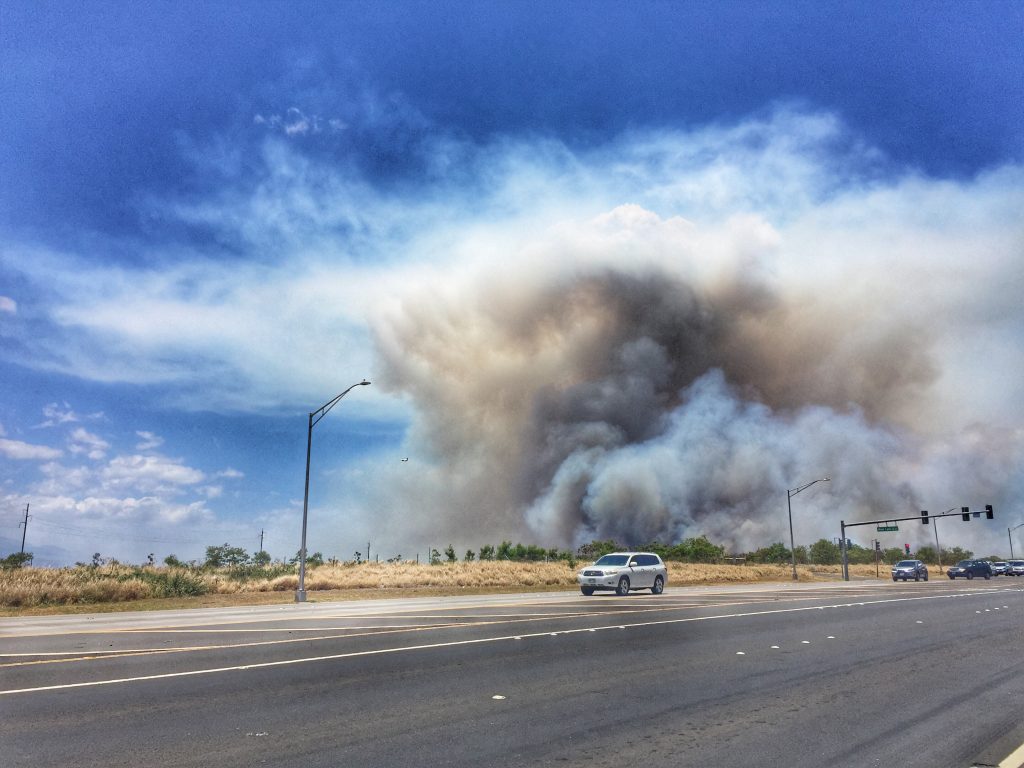 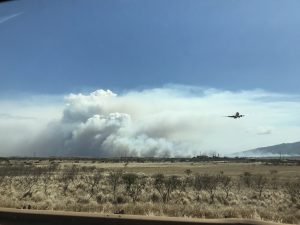 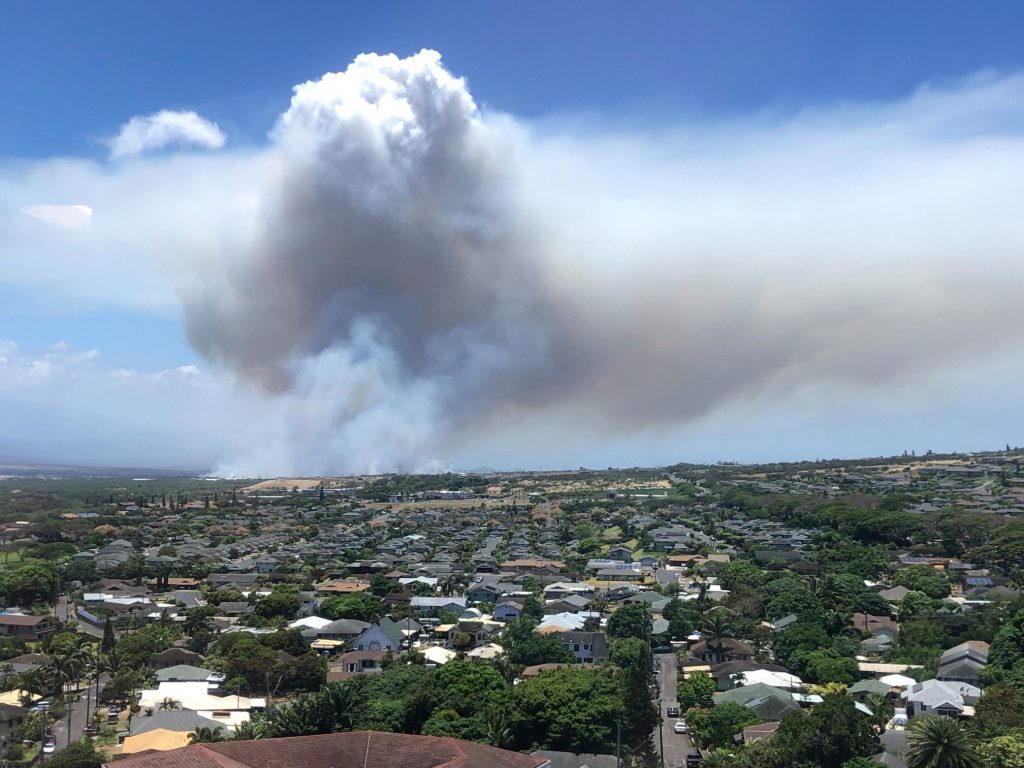 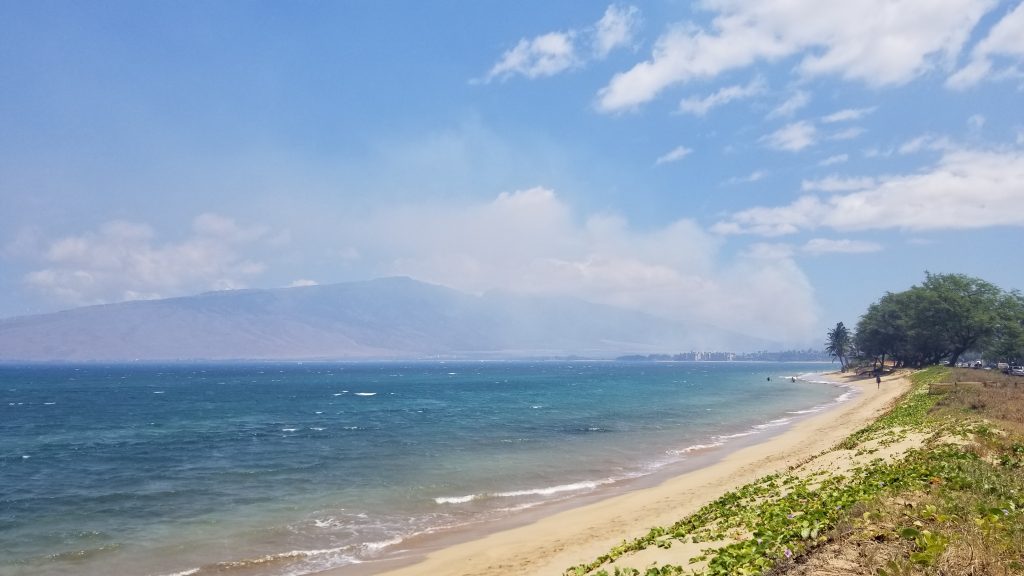 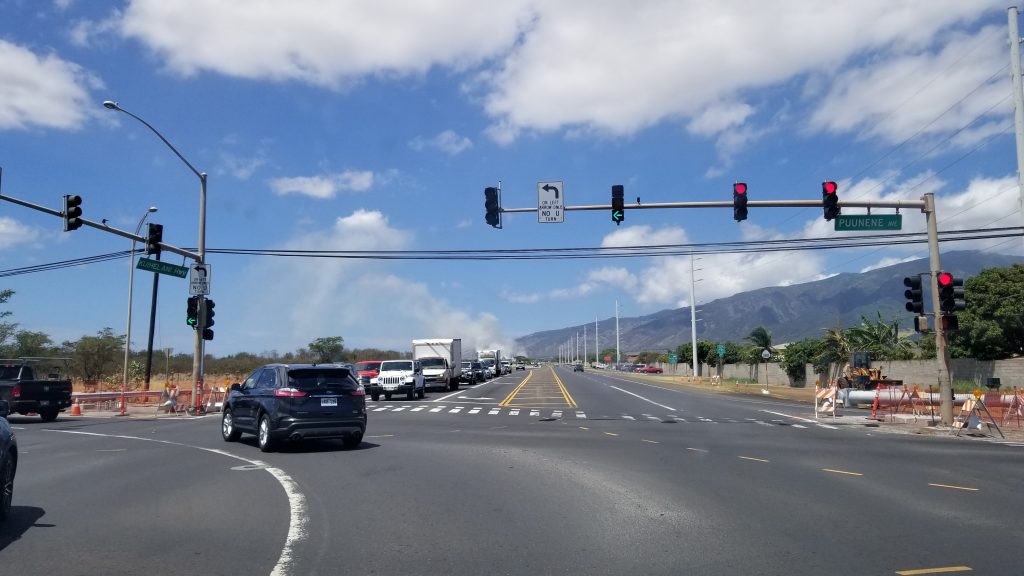 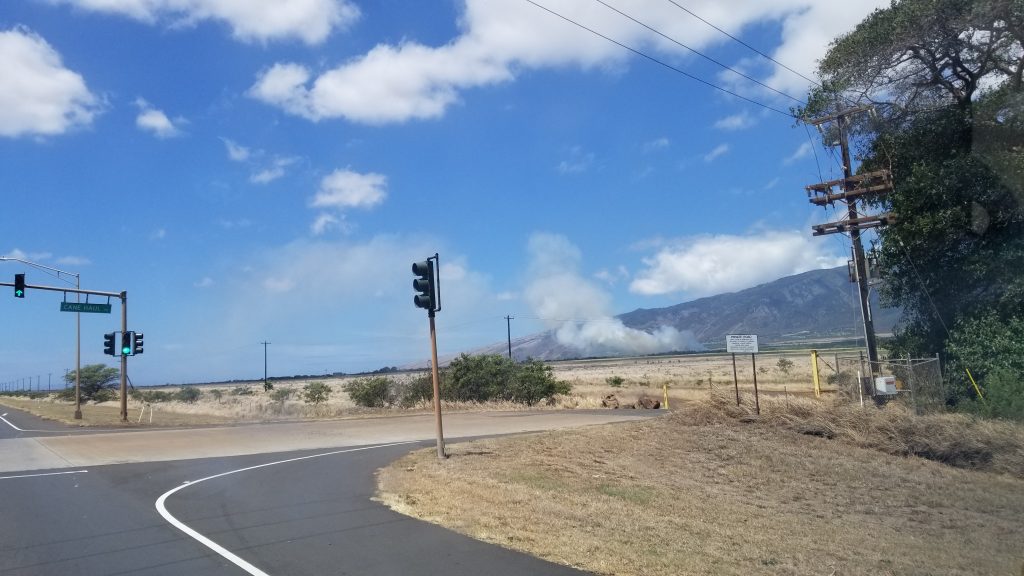 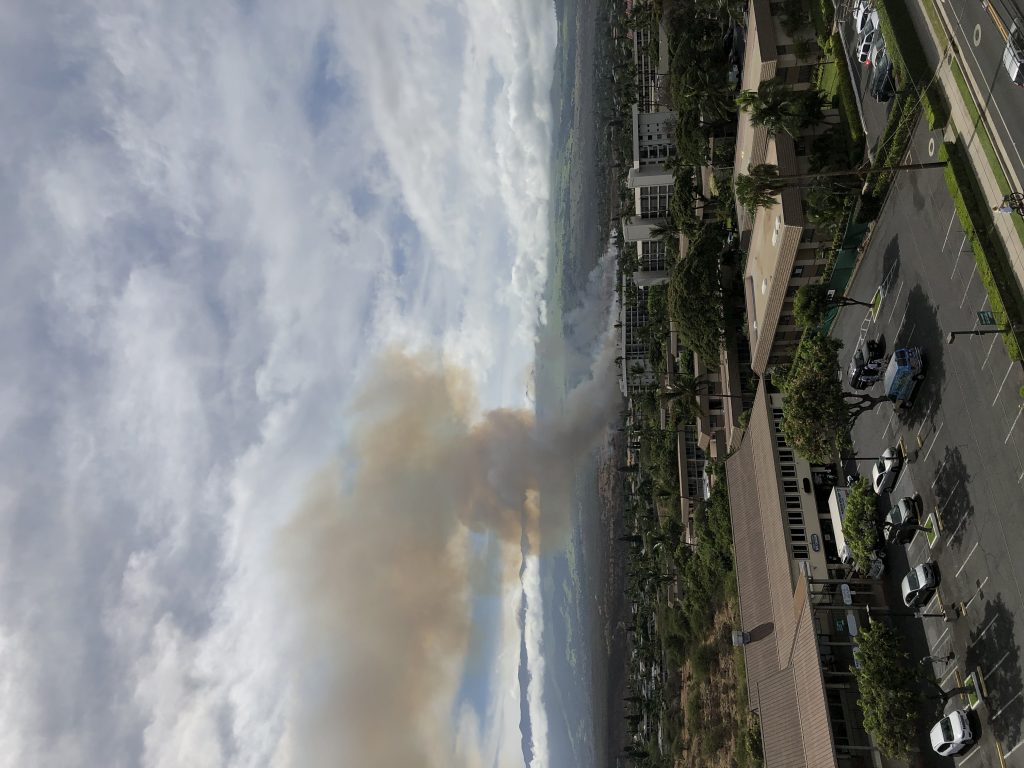 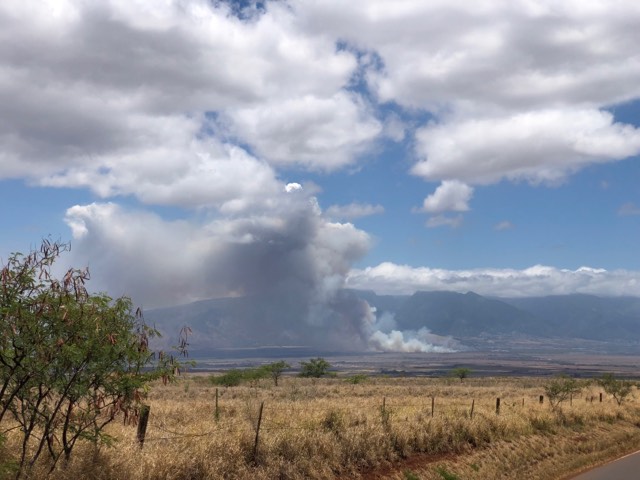 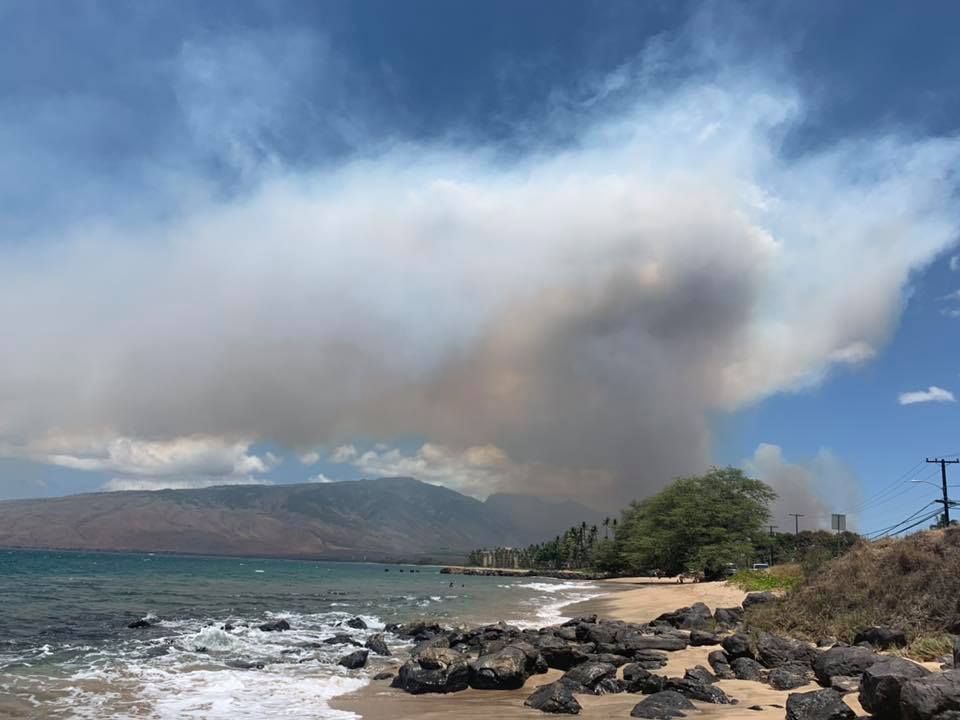 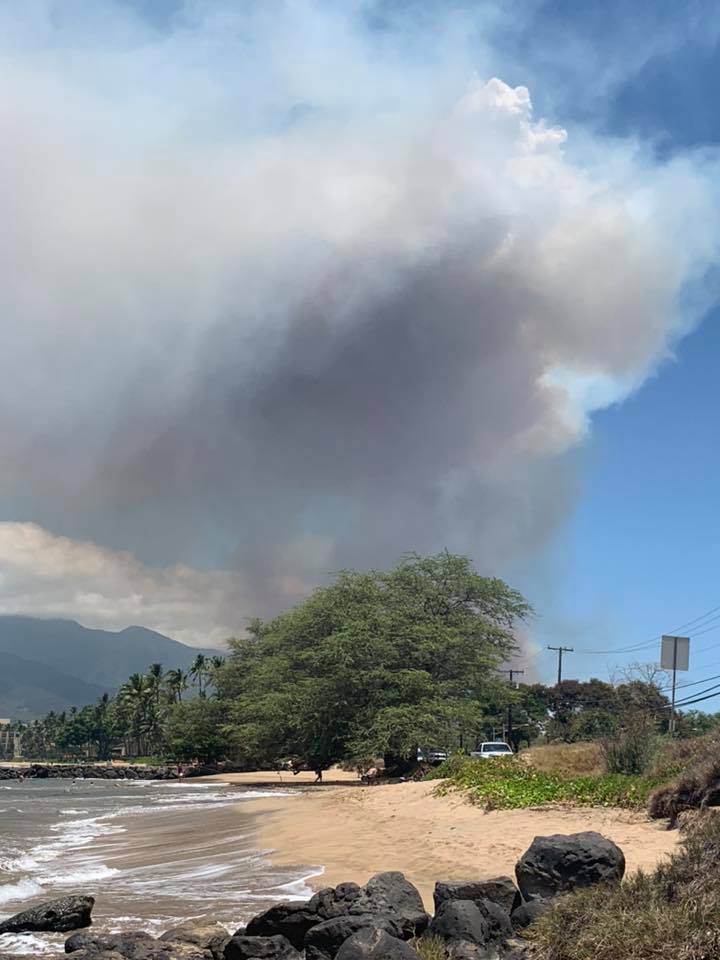 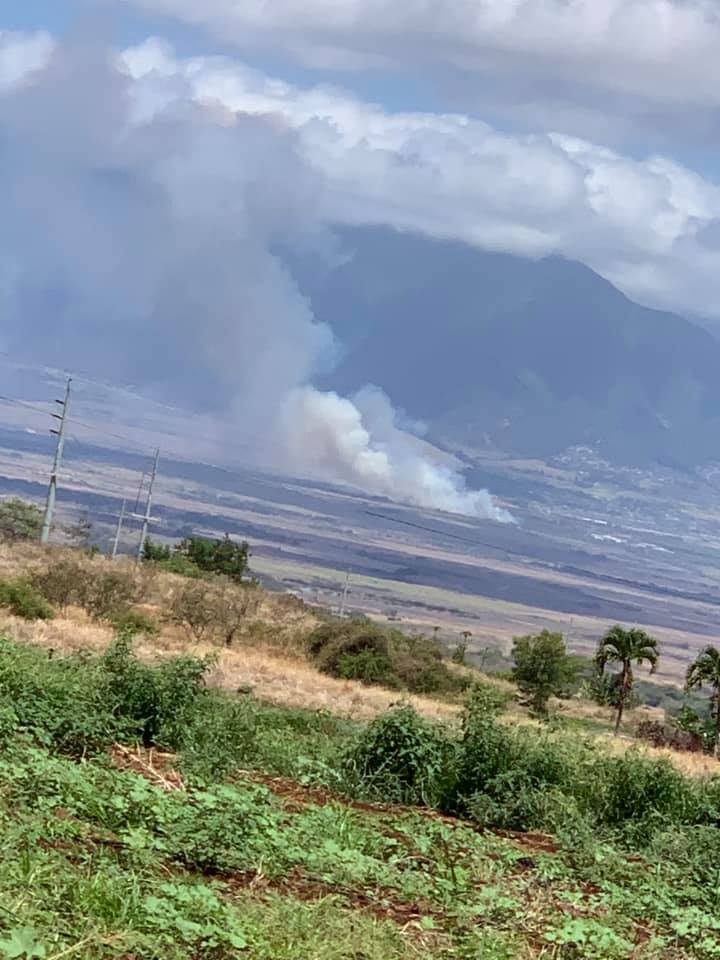 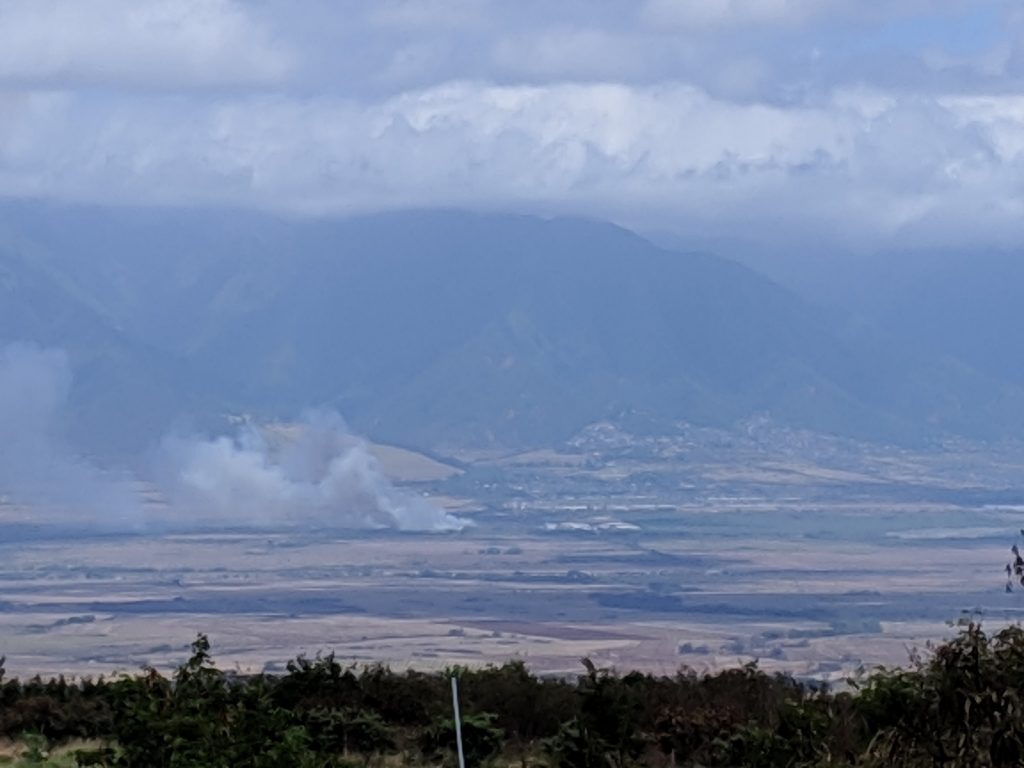 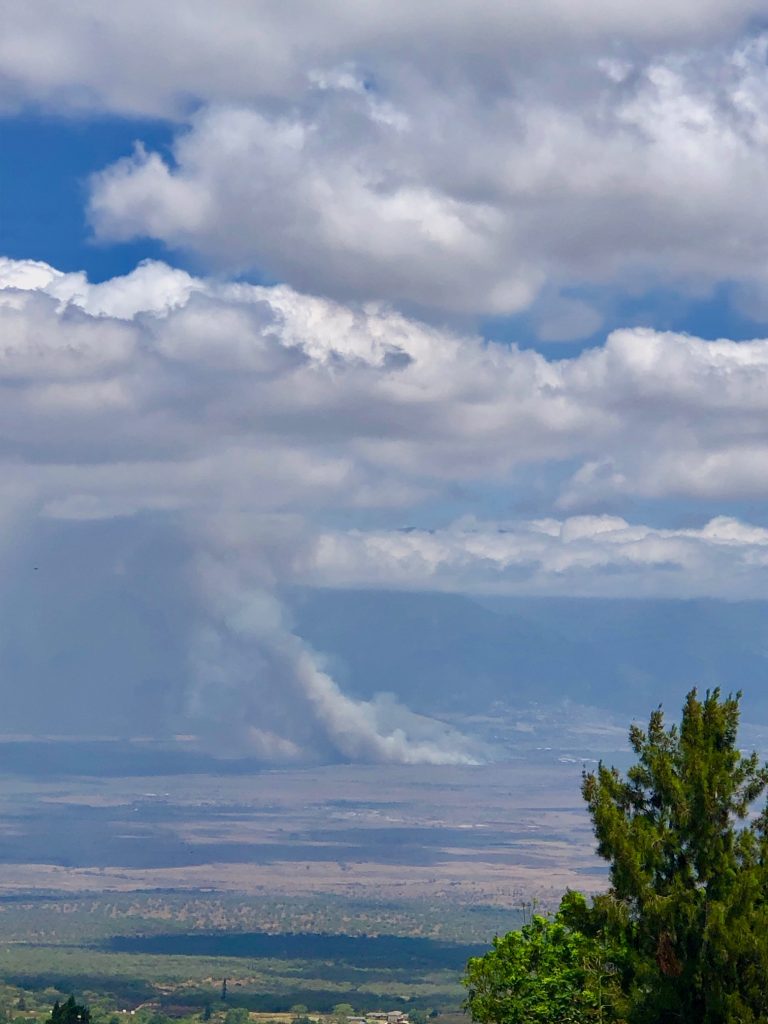 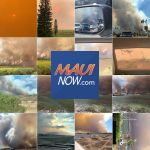 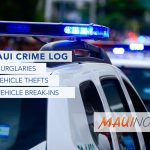