The Maui Jim Maui Invitational revealed the 2019 Tournament bracket, setting the stage for an action-packed three days at the Lahaina Civic Center.

The 36th edition of the early-season tournament will take place Nov. 25 to 27 at the Lahaina Civic Center on Maui.

All 12 Championship Round games of the Maui Jim Maui Invitational will be televised on either ESPN, ESPN2 or ESPNU, and streamed on ESPN3.

“It’s another great year for the Maui Jim Maui Invitational, with several teams expected to have big seasons ahead of them,” said Tournament Chairman David Odom. “This field features a spread of young and experienced talent – both from the players and the coaches. We’re looking forward to seeing who will take home the Wayne Duke Championship Trophy in the unbeatable atmosphere that is the Lahaina Civic Center this November.” 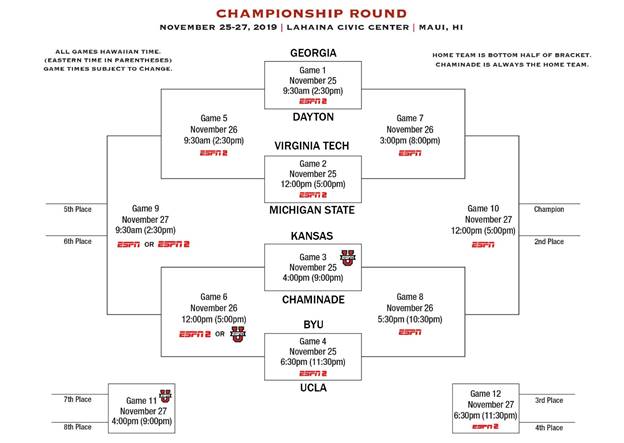 Monday’s matchups will feature Georgia squaring off against Dayton, and Virginia Tech taking on Michigan State in the top half of the bracket. In the bottom half of the bracket, Kansas will face Chaminade and BYU will go head-to-head against UCLA.

Accompanied by Tournament newcomer Georgia, the seven returning programs will come to Maui with a combined five Tournament championships.

BYU, Michigan State and Kansas are among the top 20 winningest programs in the nation since the start of the 2009-10 season. Michigan State enters the 2019 Tournament coming off a trip to the Final Four last season.

The field will feature three coaches with Final Four appearances to their names — Kansas’ Bill Self, Michigan State’s Tom Izzo and Georgia’s Tom Crean — as well as three coaches who will take over new programs after successful 2018-2019 campaigns. These include Mick Cronin at UCLA (from Cincinnati), Mike Young at Virginia Tech (from Wofford) and Mark Pope at BYU (from Utah Valley). Izzo and Self have each been honored as AP Coach of the Year.

Tournament organizers say that over the years, the Tournament has proven to be a key ingredient in a team’s success late into the season.

Notes: Kansas, which boasts two Maui Jim Maui Invitational titles and a runner-up finish, won the Tournament in its most recent appearance (2015), and this year will be tied with Arizona and North Carolina for the most all-time Tournament appearances of any non-host program with seven. Kansas and Chaminade have played three times in the Maui Jim Maui Invitational, with the Jayhawks winning each time (1987: Kansas 89, Chaminade 62; 2005: Kansas 102, Chaminade 54).

For information on how to buy tickets for the 2019 Maui Jim Maui Invitational, visit www.mauiinvitational.com/travelpackages.