The Maunakea Observatories today announced the withdrawal of all personnel from their telescope facilities atop Maunakea on Hawaiʻi Island amid safety concerns.

“This afternoon, the directors of the existing observatories on Maunakea made the joint decision to withdraw all personnel from their telescope facilities at the summit to guarantee the safety of their staff – the institutions’ top priority,” said Dr. Jessica Dempsey, Deputy Director, East Asian Observatory in a statement on Tuesday afternoon.

The announcement came as protesters rounded out Day 2 of demonstrations against the planned construction of the Thirty Meter Telescope atop Maunakea. There were no arrests to report as of 5 p.m.

“Without guaranteed reliable access to the telescopes, the Maunakea Observatories will suspend all summit activities. We anticipate returning to normal operations as soon as the situation allows,” said Dr. Dempsey.

Meantime, officials with the state say there were an estimated 200 people near the intersection of the Daniel K. Inouye Highway (formerly known as Saddle Road) and Maunakea Access Road.

The Mauna Medic Healer’s Hui, a group that is tasked with ensuring the health and safety of those involved in the demonstration, issued an update on Tuesday evening saying negotiations between protesters and law enforcement is at a standstill.

The group has been keeping watch over kupuna on the frontlines as well as the eight individuals that were on lockdown at a cattle guard on Monday.

“Protectors were willing to negotiate moving the checkpoint to the side of the road and clear the lanes but an agreement based on the terms and conditions was not reached in the conversation. At this point, there is a stand still until further conversations are held,” the group said in a press release statement.

On Tuesday, protesters spoke with media saying, “We have inherent rights here. We have undivided interest to be here. These are crown and government lands of the Hawaiian Kingdom and prolonged illegal occupation or not, we have that kuleana to protect this resource, to protect our future generations to protect our kupuna.”

“Violence, aggression—those are not our ways here. Our ways is kapu aloha, aloha ʻāina and mālama kupuna,” leaders said in a gathering at the demonstration site.

Those opposed to the TMT project are holding sign waving demonstrations at various locations throughout the state where attendees are standing in solidarity with protesters on Hawaiʻi Island.

Here on Maui, sign waving demonstrations attracted about 150 people to the intersection of Hāna Highway and Haleakalā Highway on Monday afternoon, followed by a smaller crowd at the same location on Tuesday before sundown. A sign waving event was also coordinated Tuesday morning in Lahaina fronting the Lahaina Cannery Mall in West Maui.

The state’s Joint Information Center which is handling communication surrounding the developments at Maunakea said “communication channels between the state and telescope project opponents remained open as preparations for construction continued.”

“The safety of everyone on the mountain, MKO staff, law enforcement and protesters is of paramount importance to us. This is not a decision we came to lightly, but want to emphasize the importance of safety for our staffs and the facilities,” said Dr. Dempsey with The Maunakea Observatories.

The Maunakea Observatories are a collaboration of independent institutions with telescopes located on Maunakea on the island of Hawai’i. “Together, the Observatories make Maunakea the most scientifically productive site for astronomy world-wide,” according to information released by the organization.

The current opposition involves a protest against the planned Thirty Meter Telescope, which is scheduled to start construction this week. Opponents say the project would result in further desecration of a mountain that they consider sacred.

Supporters of the TMT project meantime, say they believe in the co-existence of culture and science atop the mountain. In making the announcement last week, Govenror Ige said that after a 10 year process, the day for construction of the 30-meter-telescope has arrived.

Supporters of the project say it will provide permanent jobs for as many as 140 workers in addition to those that would be hired during the construction phase.

Puʻu Huluhulu remains open to the public and parking is available.

State officials say that “as planned,” officers and vehicles from other law enforcement agencies are on Hawaiʻi Island to assist with ongoing construction preparations. “Details about their operations will not be released,” authorities said in an afternoon update.

The public in the area is advised to drive carefully and expect increased traffic and possible delays. 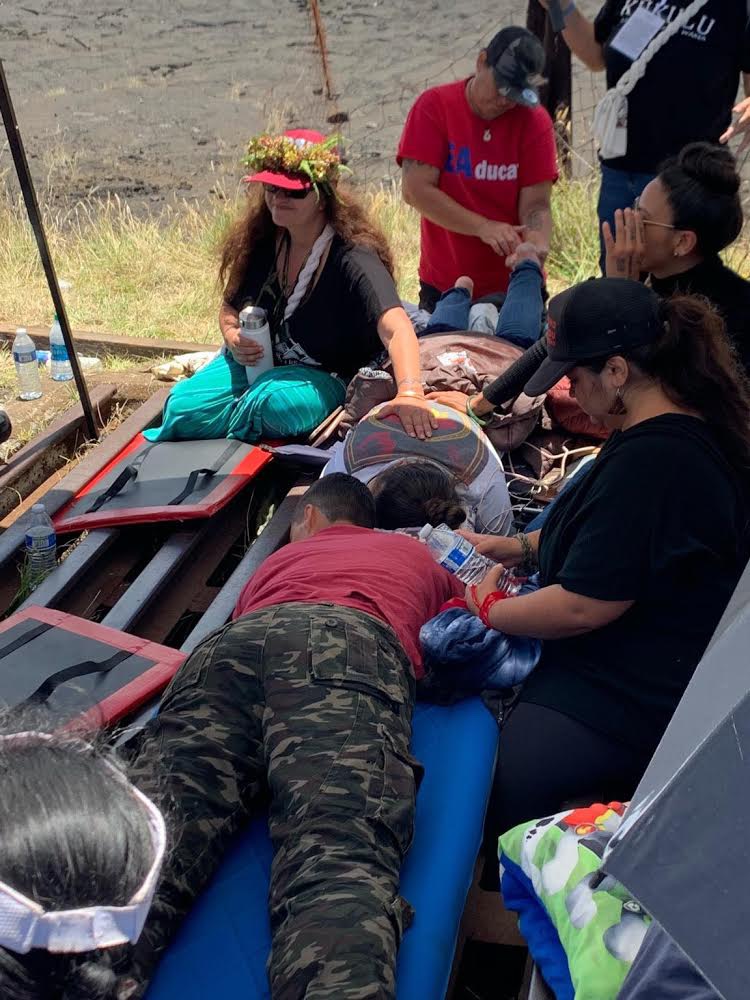 Opponents of the TMT project on Hawaiʻi Island are protesting against construction of the telescope atop Maunakea. (7.15.19) PC: Noelani Ahia

Opponents of the TMT project on Hawaiʻi Island are protesting against construction of the telescope atop Maunakea. (7.15.19) PC: Noelani Ahia 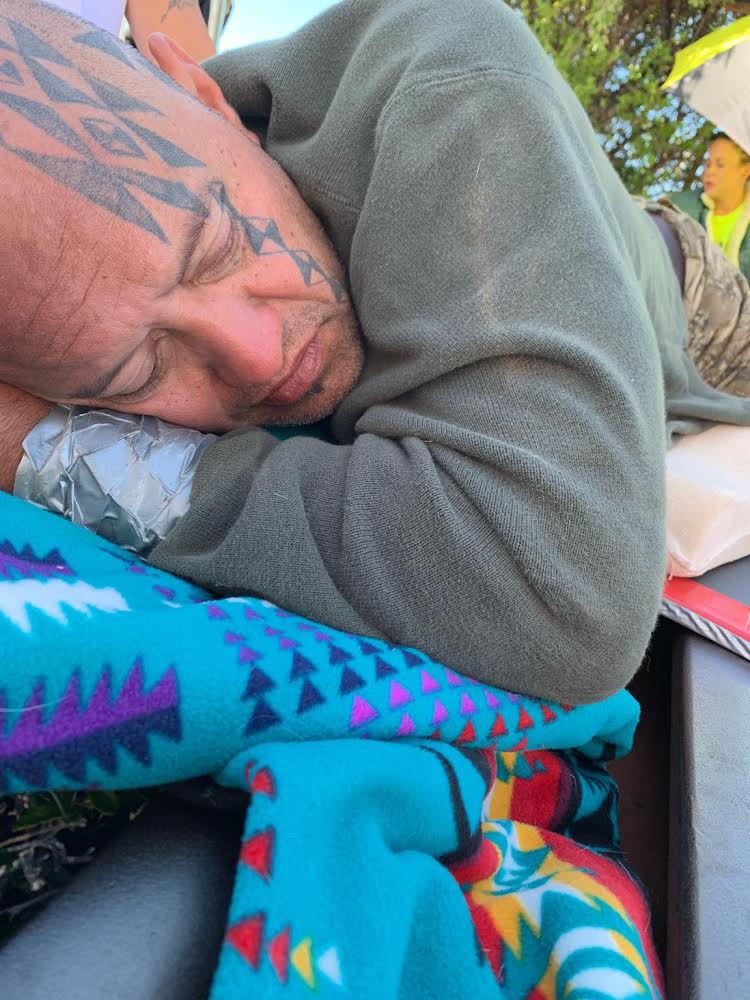 Kaleikoa Ka’eo is among the opponents of the TMT project on Hawaiʻi Island that are protesting against construction of the telescope atop Maunakea. (7.15.19) PC: Noelani Ahia 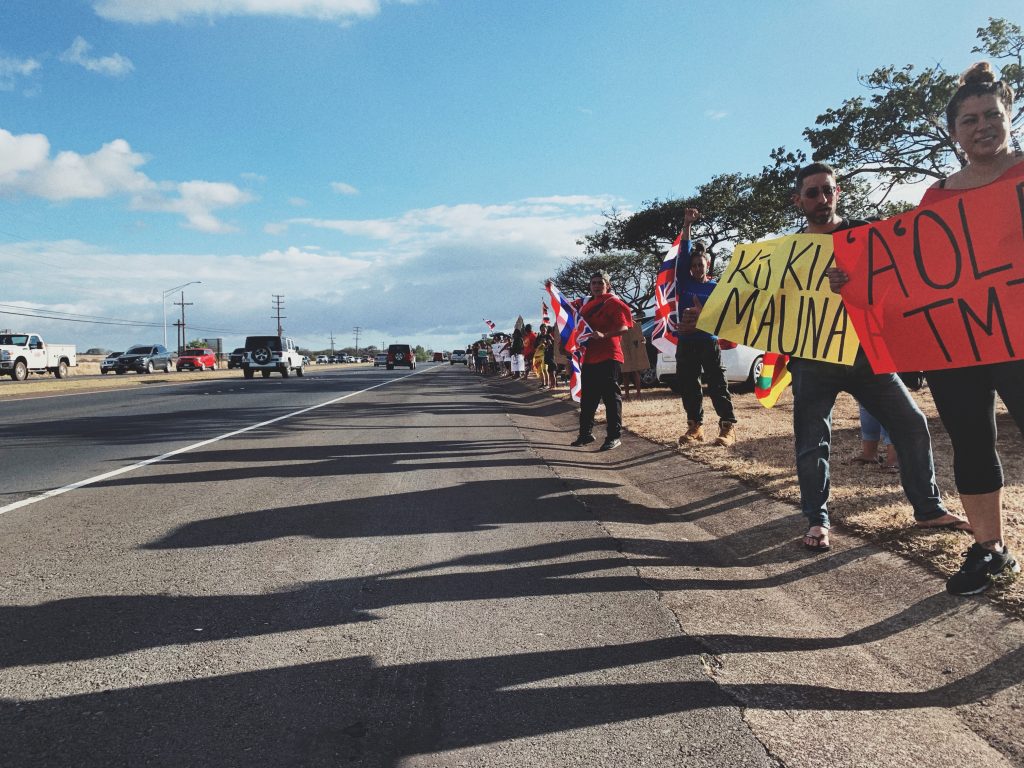 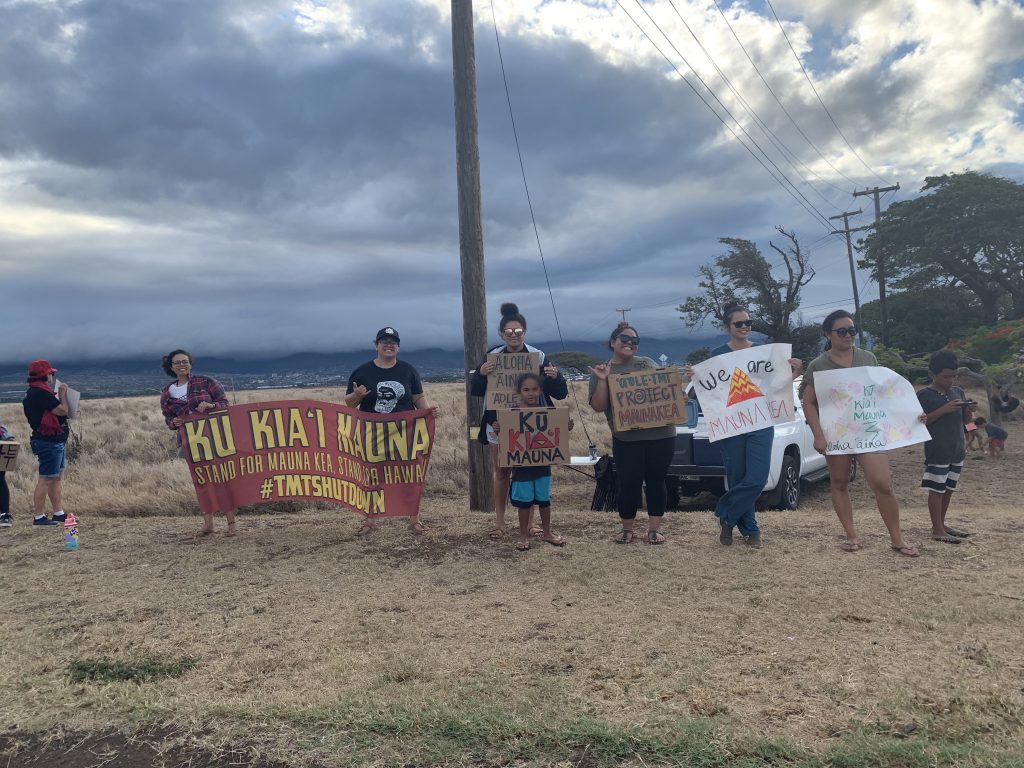 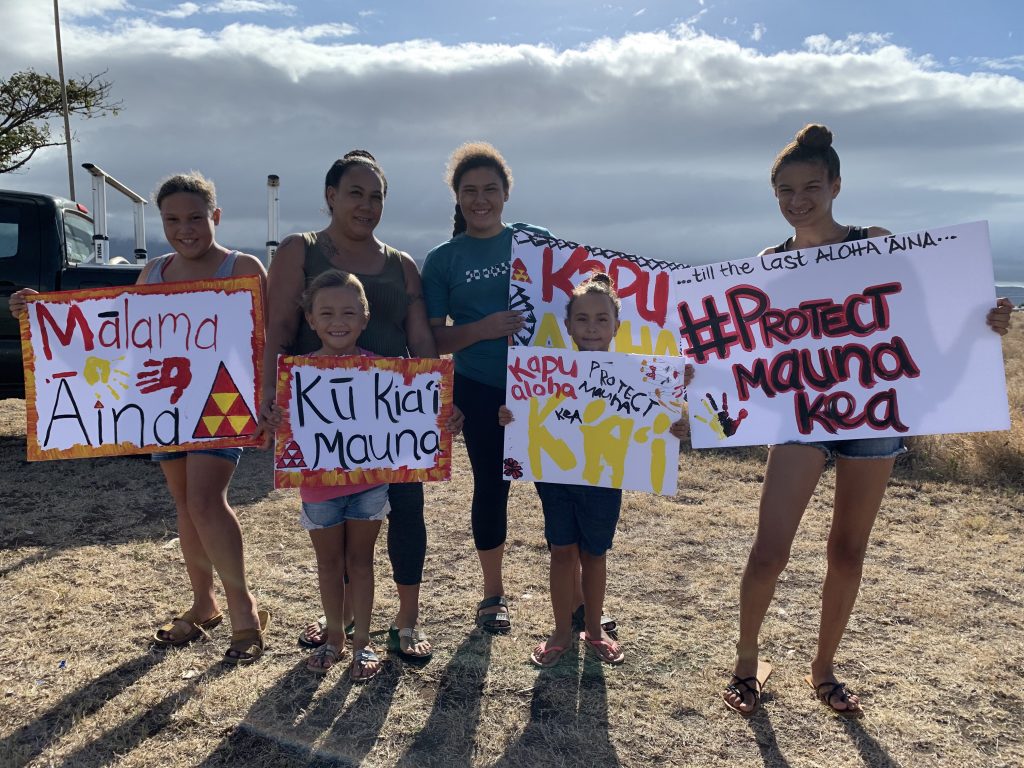 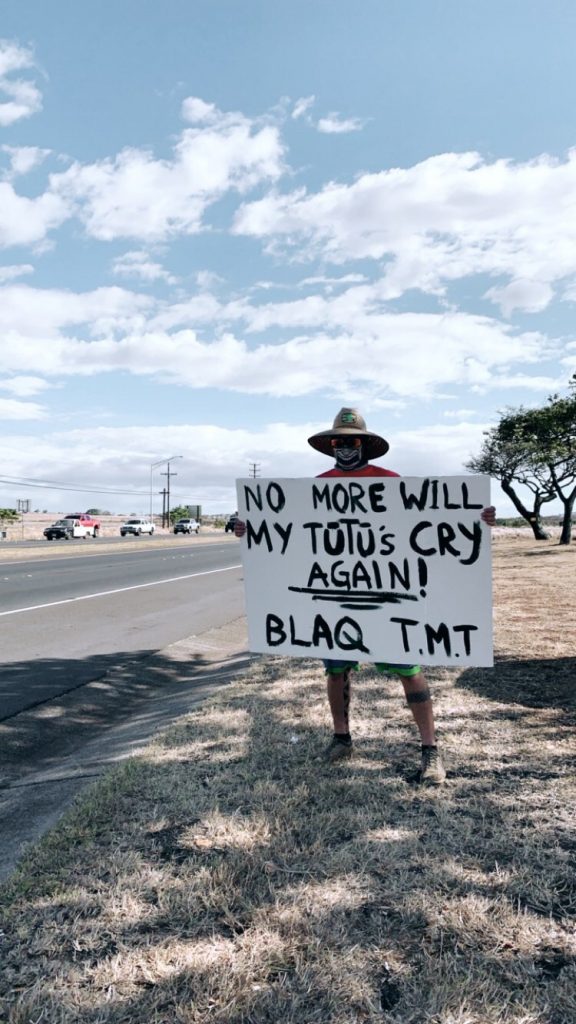 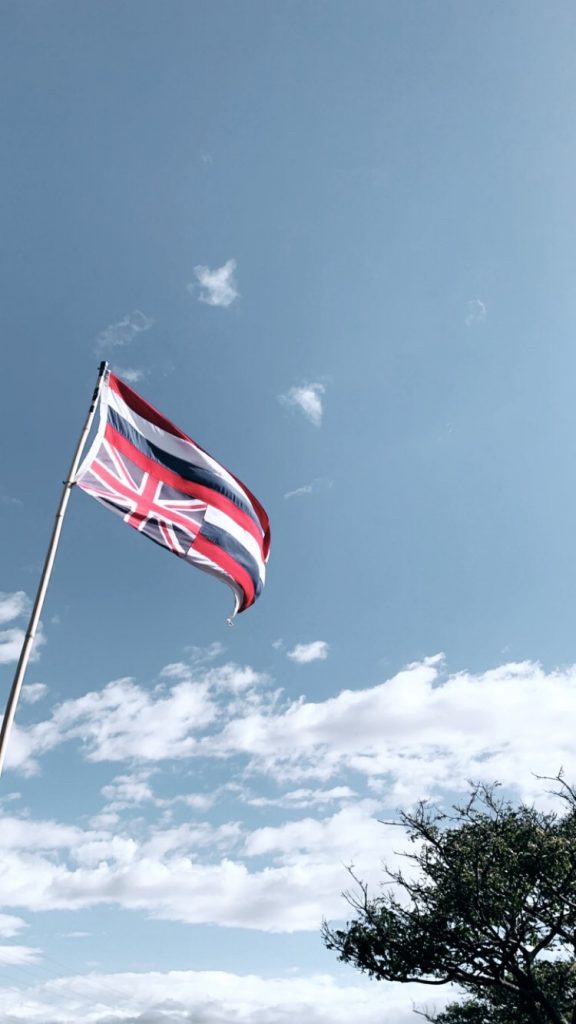