Dwayne “The Rock” Johnson is the latest high profile individual to visit Puʻuhonua o Puʻu Huluhulu. The mid-day visit came with protocol welcoming the actor, producer and professional wrestler of WWE fame to the site where an ongoing demonstration against further development atop Maunakea is now in Day 10. 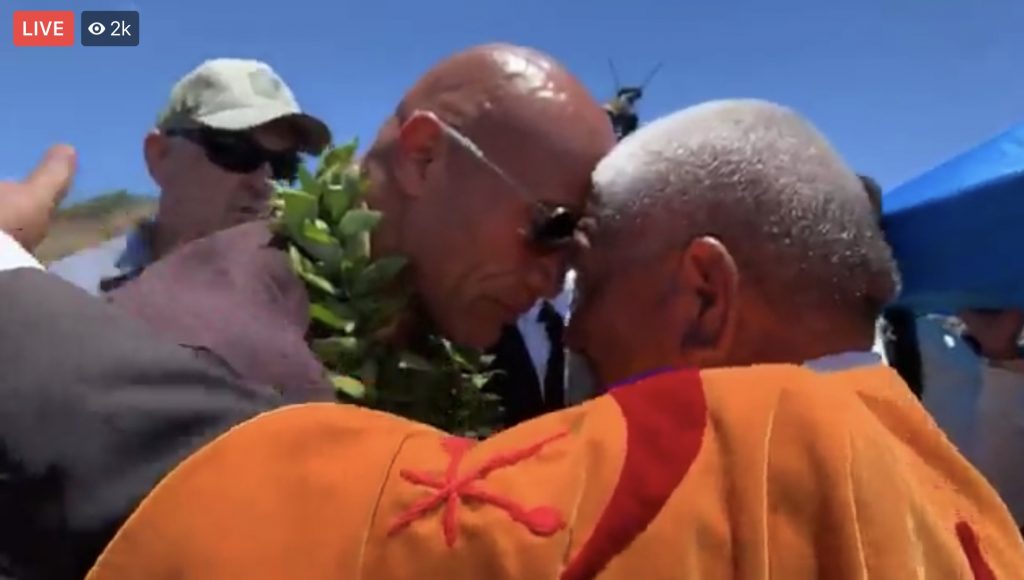 Dwayne “The Rock” Johnson is welcomed at Puʻuhonua o Puʻu Huluhulu on Wednesday afternoon, July 24, 2019. In this photo, he is greeted by members of the Royal Order of Kamehameha. Photo grab courtesy: Kāko’o Haleakalā

During the unannounced visit, Johnson observed cultural protocol, greeted elders, chatted with leaders of the movement and took photos upon request with fans.

Last year, New Line Cinema confirmed they had tapped Johnson to play the starring title role of Kamehameha I in film THE KING. Johnson was also the voice of the demi-god Maui in Disney’s Moana that was released in 2016.

Celebrities are not new to the scene at Maunakea. In 2015, Jason Momoa who starred in Game of Thrones and more recently in Aquaman, voiced his concerns via social media by circulating a shirtless picture of himself with the words “We Are Maunakea” written on his chest in protest against telescope construction.

That image sparked a viral movement three years ago of celebrities who also championed the cause by sharing images with the #wearemaunakea hashtag.

With the latest developments and establishment of the puʻuhonua 10 days ago, Momoa has posted several images via Instagram in support of those who call themselves “protectors” or “kiaʻi” (guardians) of the mountain saying, “I’m so sorry I can’t be there right now. My ʻohana needs me,” and at the same time, encouraging others to spread “awareness and aloha.”

Opponents have said that construction would further desecrate a mountain they consider sacred.  “This is not just about one mountain in Hawai’i,” a petition at Change.org states, calling protection of Maunakea a “global movement.”

Advocates of the telescope construction say they believe in the co-existence of culture and science atop the mountain.  Supporters also have said it will provide permanent jobs for as many as 140 workers.

The Hawaiʻi Department of Transportation today affirmed its continued support of joint operations at Maunakea saying its primary mission at the site “is to ensure the safety of everyone on the roads leading up the mountain—drivers, protestors, astronomers, and contractors alike.”

The department has placed signage, cones and barriers to make motorists on the high-speed facility aware of pedestrians and law enforcement at the base of Maunakea Access Road. The department has also suspended all lane closures on the alternate route through Hamakua (Hawaiʻi Belt Road) to facilitate travel for those needing to go between east and west Hawaiʻi.

Officials with the HDOT issued a press release today saying the department “supports the legal right of TMT to construct as the project has been approved through the state’s procedures and rules,” including:

Department officials say the HDOT will continue to work with law enforcement to address what they call “illegal actions by protestors on neighboring islands to impact the daily lives of commuters on other state roads such as the H-1 Freeway.”

The department issued a press release today saying, “We understand that there are many perspectives on the state’s involvement in the facilitation of the construction of the Thirty Meter Telescope and respect the rights of community members to exercise their freedom of speech in a peaceful, legal manner.”

Executives with the Gemini Observatory atop Maunakea report that crews conducted overnight repairs on Tuesday night into Wednesday morning.

Two technical staff were able to access the summit facility to conduct “critical” technical repairs, after reportedly having been denied access on Tuesday morning.

“The cooling system needed urgent repair, which required specialized technicians to shut down in order to prevent damage to the instruments and the cooling circuit itself,” said Dr. Adamson.

“The small crew successfully executed their plan to shut off the compressors, shut down and start warming up the two at-risk instruments, disconnect specific joints in the cooling system, and perform a standard facility inspection that is usually conducted on a daily basis during normal operations. The crew concluded their work just after 2 a.m. and returned to Gemini’s Hilo base facility after 3 a.m.,” said Dr. Adamson.

Dr. Adamson said the Observatories hope to return as soon as possible to long-term reliable access to their facilities, in the hopes of resuming nightly scientific observations.

“We are grateful to law enforcement for facilitating safe access for this critical repair work, preventing significant damage to the complex instruments,” said Dr. Adamson, who also credited the personnel who completed “the delicate technical work under,” what he called, “such unusual conditions.”