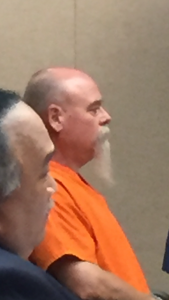 A Wailuku man testified that he thought his neighbor was coming to shoot and kill him after they got into an argument on July 26 and at their 151 North Market Street housing complex.

Shayne Kupihea testified during a preliminary hearing at District Court on Thursday that he confronted neighbor Frank Coricelli, 57, through the screen door of Coricelli’s unit and in response Coricelli pointed a handgun at his face. Kupihea said Coricelli lowered the gun and fired it past his hip, which he took as a “warning shot.”

“I was frozen, I wanted to see what he going do,” Kupihea said.

But as soon as Coricelli turned, Kupihea said he ran next door to his unit, grabbed his 6-year-old son and pressed his body against the wall in order to protect him. That’s when he saw Coricelli lean into his unit through the door and point the gun at him again.

“I thought he was coming to kill me,” Kupihea said. “He’s coming to finish the job.” 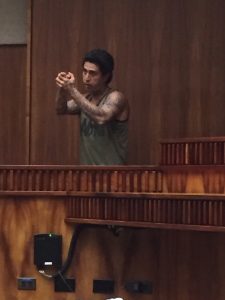 Kupihea testified that Coricelli was about 8 feet away when he fired the second time. Coricelli then left the scene and police arrested him later that evening when he returned.

Maui Police Detective Leif Adachi said when investigators served a search warrant at Coricelli’s place the next day they found seven pistols, seven rifles, a shotgun, four silencers and various amounts of ammunition for all of the weapons. The list of firearms included an AK-47, two Glocks and a .30-06 rifle. 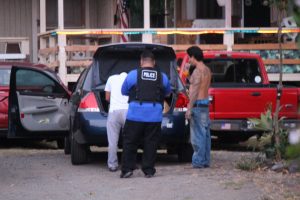 Maui Police Detective Bryan Malapau testified that a criminal background check showed Coricelli is a convicted felon in two states, Nevada and California, a fact that police said Coricelli confirmed for himself.

“He said he’s a convicted felon,” Malapau said. “He brought it up.”

Malapau testified Coricelli also told police he “built it” himself when referring to the firearms recovered during the search warrant, except for the .30-06 rifle.

District Court Judge Kristin Hamman said there was enough evidence to sustain the charges and send the case to trial in Circuit Court. Trial is scheduled for August 18th.