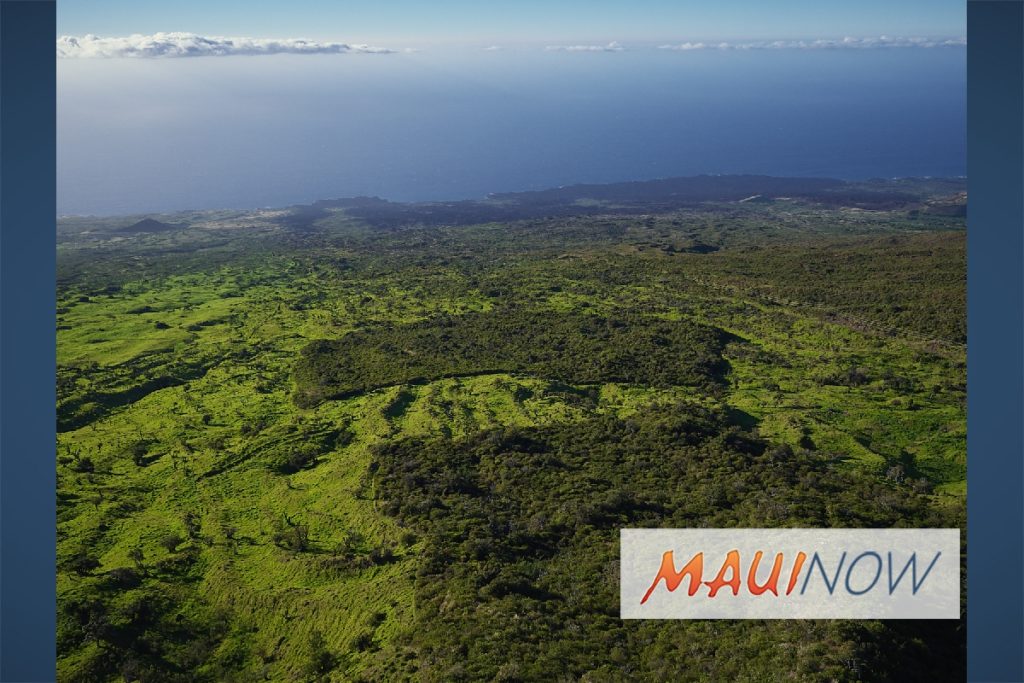 Native forest once stretched across Maui’s central isthmus (from Kula through Makawao and Pukalani to Kahului), linking forests now separated by about 40 miles.

“Because of the influence of invasive species and fire, these forests, once the heart of leeward watersheds, have been reduced to tatters, with about 2% of what formerly occurred remaining,” according to Dr. Arthur Medeiros, Program Manager for the Auwahi Forest Restoration Project.

The project, along with Kua‘āina Ulu ‘Auamo have been identified by renowned musician and songwriter Paul Simon as beneficiaries of proceeds from two concerts he will be playing next week on Aug. 13 and 14 at the Maui Arts & Cultural Center.

Every ticket sold will contribute to this donation, which will facilitate the protection and restoration of a new forest tract of about 23 acres that has already been selected at Auwahi.

“From a biodiversity perspective, Hawaiian dry forests are among the richest and most imperiled of American forest ecosystems. To native Hawaiians, these leeward forests were the primary source of much of what they once used in their everyday lives, including farming and fishing equipment, canoe construction, weaponry, medicine, and symbols of spirituality and hula,” said Dr. Medeiros.

According to Dr. Medeiros, the remnant forest area to be restored harbors many dry forest tree species found nowhere else in the world, including the incredibly rare māhoe (Alectryon macrococcus var. auwahiense), hōlei (Ochrosia haleakalae), ‘aiea (Nothocestrum latifolium), and alani (Melicope knudsenii)–all considered Endangered by the US Fish and Wildlife Service.

Biologists say that many native plants and trees in this tract “are noted in early Hawaiian literature and even ‘oli (song), but now are so depleted and/or restricted in distribution that the majority of native Hawaiians have never seen them.”

Beginning in 1997, ʻUlupalakua Ranch (the private landowner of Auwahi forest that has dedicated the lands for forest conservation), local biologists, and the public began working together to attempt to restore some of these last remnants of diverse dry forest stands at Auwahi.

“The ecological and social advances made over the past 20 years have been surprising and encouraging,” said Dr. Medeiros.  “Following restoration, native species vegetation cover increased from 10% to 98%, while non-native species cover declined from 87% to 2%. Even more unexpected, after an absence of hundreds of years, native seedlings of diverse species began reappearing in the recovering forest understory.  To ecologists, this is like a heartbeat getting louder, a sign of forest health.”

Restored forest tracts in Auwahi are now probably the closest on leeward Maui to the pre-1700s landscapes in which many early Hawaiians lived, according to managers with the Auwahi Forest Restoration Project.

These two evenings on Maui with Paul Simon are the only shows he will be doing in Hawai’i.  The upcoming concerts mark the first time Paul Simon has ever performed on Maui, and his first Hawaiʻi shows since Simon & Garfunkel appeared at Honolulu’s HIC Arena (Blaisdell Arena) over 50 years ago, in 1968.

Paul Simon has 16 Grammy awards as well as a Grammy Life Time Achievement award. He has been inducted into the Songwriter Hall of Fame and Rock and Roll Hall of Fame twice (both as a single artist and with the duo Simon and Garfunkel), awarded the prestigious Library of Congress Gershwin Prize for Popular Songs, and named one of the “100 People Who Shift Our World” by Time magazine.

The community-based Auwahi Forest Restoration Project operates on the principles that “involvement and support of local communities and scientific knowledge of ecological restoration and climate change are essential elements for durable conservation.”