Scientists Now Tracking Ponds of Water, Not Lava, at Kīlauea 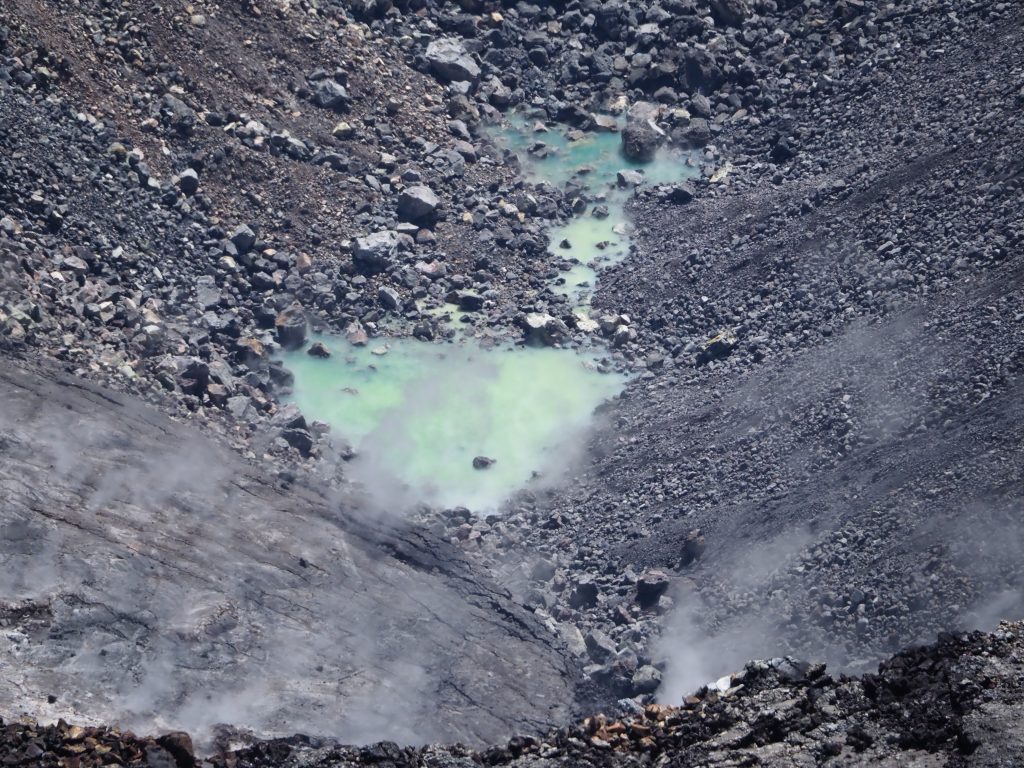 A telephoto view of the ponded water at the bottom of Halema‘uma‘u on August 7, 2019.  For scale, the largest pond is about 15 meters (50 feet) in diameter.  USGS photo by D. Swanson.

The recent appearance of water at the bottom of Halema‘uma‘u, a crater at the summit of Kīlauea Volcano, has attracted wide attention and generated many questions. To understand the significance of this water, we must first gather accurate information on its behavior. Similar to our monitoring of ponded lava in Halema‘uma‘u in 2008‒2018, USGS Hawaiian Volcano Observatory scientists are now relying on both direct observations and modern tools to monitor the water.

During regular visits to Kīlauea, HVO staff observe, measure, and document changes in the water in Halema‘uma‘u through photographs, videos, and thermal images.

As shown in HVO’s website photos, the ponds are milky turquoise, or greenish, in color, indicative of dissolved sulfur and metals from magmatic gases or surrounding rock mixing into the water. Thermal images show water surface temperatures of approximately 70 degrees Celsius (158 degrees Fahrenheit). Tracking both color and temperature of the ponds will help to identify changes in chemistry and heating.

The water in Halema‘uma‘u is not visible from publicly accessible areas of Hawaiʻi Volcanoes National Park, but this past week, HVO moved one of its existing webcams to a site that provides a direct view of the ponds. This temporary webcam doesn’t have high enough resolution to discern small scale changes in the water level but will nevertheless be valuable for identifying larger scale events.

To measure the level of water in the ponds, HVO scientists use a long-range laser rangefinder. These daily measurements show that the water level has slowly risen, enlarging the ponded water area over the past week.

Future helicopter overflights will allow us to map and precisely measure the area and volume of the changing ponds. Using oblique photographs, we can create 3-dimensional models of the crater floor. Comparing these updated models with the lidar (light detection and ranging) data collected in July 2019 will help us estimate water volume. High-resolution satellite images, which are routinely collected at Kīlauea’s summit, can fill in observational gaps between HVO’s overflights.

Unmanned aircraft systems, or drones, a tool used during the 2018 events, could also provide aerial imagery and precise measurements of pond area and volume.

In addition to surface observations, HVO also monitors for subsurface changes. Fortunately, Kīlauea’s summit hosts one of the densest volcano monitoring networks on Earth. Seismic, deformation, and gas instruments can help determine if magma is rising closer to the surface. Seismic monitoring may be able to detect instabilities in the hydrothermal system (the zone where groundwater and hot gases interact) that, at other volcanoes, have been precursors to eruptions.

Direct sampling and chemical analyses of the water in Halema‘uma‘u would provide insight into its source—if it is a shallow accumulation of rainwater or the surface expression of a deeper-seated layer of groundwater. Some of the water could also be from condensed water vapor directly released by the magma.

Knowing the water’s source will help us better understand the possible hazards associated with it. For instance, if the water is from the extensive zone of groundwater around the crater, it could be more likely to interact with rising magma and result in explosive activity.

Given the hazardous location of the water, however, direct sampling is tricky. Walking down to the ponds is not advised due to the possible accumulation of carbon dioxide on the crater floor. Other dangers include frequent rockfalls from the steep, unstable slopes.

In recent media interviews, HVO scientists have discussed how the presence of water could increase the potential for explosive activity given the right set of conditions. At the current time, however, monitoring data do not indicate any signs of imminent unrest at Kīlauea’s summit. Magma continues to quietly recharge the summit magma reservoir.

The historically unprecedented appearance of water in Halema‘uma‘u is a reminder that, even in the absence of a lava lake, Kīlauea’s summit remains a highly dynamic place.

Monitoring data for deformation have shown no significant changes in Kīlauea activity over the past week. Rates of seismicity across the volcano remain low. Sulfur dioxide emission rates are low at the summit and below detection limits at Puʻu ʻŌʻō and the Lower East Rift Zone (LERZ).

At or near the 2018 LERZ eruptive fissures, elevated ground temperatures and minor releases of gas (steam, tiny amounts of hydrogen sulfide, and carbon dioxide) persist. These are typical post-eruption conditions and are expected to be long-term, as they were after the 1955 LERZ eruption.

Observations of three small ponds of greenish water at the bottom of Halema‘uma‘u have been confirmed by HVO scientists. The water level in these ponds continues to slowly rise, with the ponds beginning to coalesce. HVO is monitoring the water closely, and under the current conditions, its presence in the crater has not increased the risk to public safety.

Mauna Loa is not erupting. Its USGS Volcano Alert level remains at ADVISORY because earthquake and ground deformation rates at the volcano continue to remain slightly elevated above long-term background levels. This alert level does not mean that an eruption is imminent or that progression to an eruption is certain. A similar increase in activity occurred between 2014 and 2018 and no eruption occurred.

This past week, approximately 130 small-magnitude earthquakes (most less than M2.0) occurred beneath the summit and upper Southwest Rift Zone.Deformation measurements show continued summit inflation, suggestive of recharge of the volcano’s shallow magma storage system. No significant changes in volcanic gas release on the Southwest Rift Zone were measured, and fumarole temperatures there and at the summit remain unchanged.

No earthquakes with three or more felt reports occurred in Hawaii this past week.