State Senate majority leader Kalani English expressed his opposition to the construction of the Thirty Meter Telescope in an email he sent out earlier today.

“The Thirty-Meter Telescope (TMT) controversy atop Mauna Kea is not a new issue. It is a part of a forty-year struggle to address mismanagement by the University of Hawai’i of a site considered sacred and environmentally significant. Communities around the world have expressed their support for the thousands of protectors gathered peacefully at the base of the summit.

The protection of our natural resources and the impact of climate change severely affecting the region calls for us to work together as we seek remedies for the historical and environmental degradation that occurred in these islands,” English wrote.

The statement comes as the anti-TMT movement stationed at the base of Mauna Kea access road enters its sixth week.

English and the other members of the Hawaiʻi State Senate Hawaiian Caucus showed their support for the movement in a statement earlier this month.

“It is vitally important that people on both sides continue to engage in kapu aloha and use non-violent means to express themselves and seek redress,” the statement read.

Dozens of demonstrations have been staged across the islands from both sides.

Those against the telescopeʻs construction cite cultural and religious beliefs for their resistance, while supporters claim that TMT would propel scientific research and education. 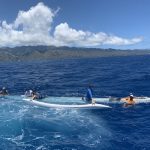