Hawaiian Airlines generated the equivalent of $9.3 billion in economic benefit for the state of Hawai‘i and supported more than 60,000 jobs in 2018, according to an independent report conducted in recognition of the airline’s 90th year of service.

“Due to the State’s unique geography, HA (Hawaiian Airlines) provides a service to Hawai‘i that is unmatched anywhere else in the US and most of the world,” the report concluded. “The regional economy would be severely stalled without the airline’s inter-island, domestic and international flights.”

The report and analysis was conducted by ICF, a global consulting services company with specialized expertise in aviation and other industries.  ICF examined the most recent publicly available full-year data to assess Hawaiian’s economic impact to its home state.

Hawaiian Airlines is Hawai‘i’s oldest and longest-serving airline.  The airline was founded as Inter-Island Airways on Nov. 11, 1929. Today it employs more than 7,300 people and operates more than 260 daily flights. Hawaiian currently operates flight between the Hawaiian Islands and also connects Hawai‘i to the US Mainland, Asia, Oceania and the South Pacific.

The report, which was commissioned by the airline, noted that in addition to direct benefits derived from visitor and employee spending, the airline generates regional employment and revenue through spending on daily operations, capital investments, and indirect spending by visitors and passengers. Highlights from the report include the following: 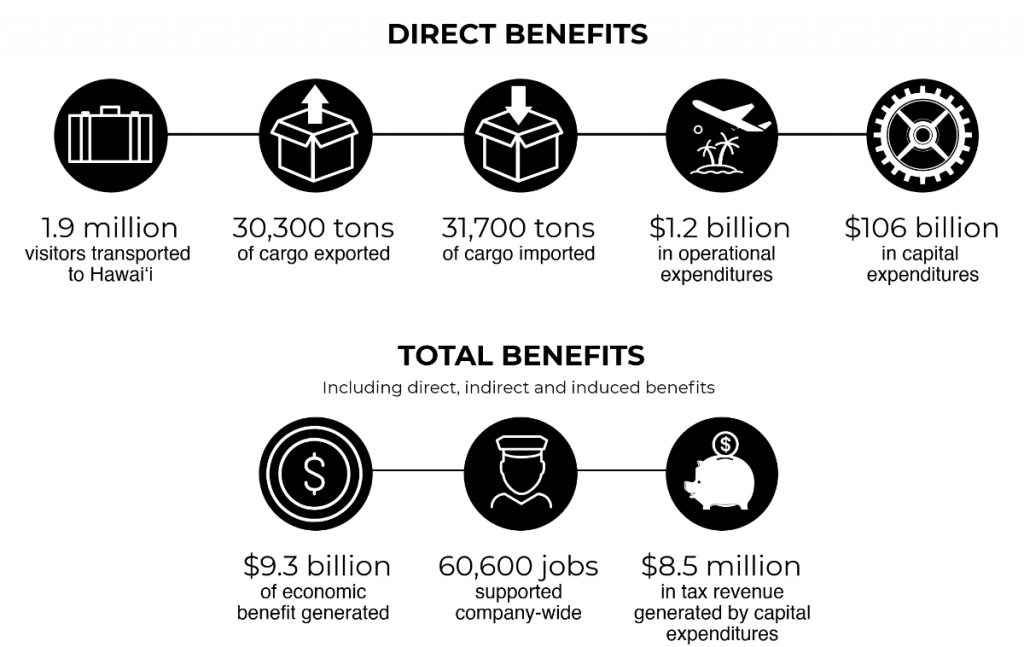 Hawai‘i economist Paul Brewbaker, who also contributed to the report said, “Hawaiian Airlines’ 90-year history is the modern economic history of Hawai‘i, opening it to commerce and trade in services by connecting the islands with each other and the world.”

In addition to a comprehensive economic impact analysis, the report profiles five local entities that share their experiences about working with and using Hawaiian Airlines. “Whether delivering perishable medical supplies, transporting high value cargo or flying students between neighboring islands for athletic competition and community service opportunities, the airline is a cornerstone in maintaining a superior quality of life for residents,” airline executives said in a press release recap.

“We take great pride in all we do to connect residents, businesses and families,’’ said Peter Ingram, president and CEO of Hawaiian Airlines. “We are proud to have been Hawai‘i’s airline for 90 years, and we intend to be here serving the needs of our home state for at least 90 more.”