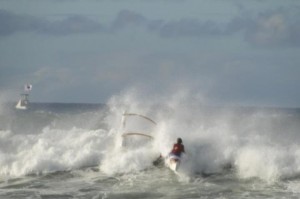 The 41st Annual Hawaiian Airlines Nā Wahine o Ke Kai [1] Canoe Race is less than 30 days away and crews around the world are preparing for this year’s channel crossing.

This year’s race is on Sunday, Sept. 22, 2019 and starts at Hale O Lono Harbor on the island of Molokaʻi. After paddling for hours across the Kaiwi Channel, the racers will finish at the Duke Kahanamoku Beach in Waikīkī on the island of Oʻahu. The finish line is marked by buoys off of the Hilton Hawaiian Village Pier.

This Hawaiian outrigger canoe race marks the pinnacle of the long-distance season with a 41-mile race considered the world championship for women participating in the sport.

Crews will compete in one of the eight divisions including Koa, Unlimited, Open, Juniors, Masters 40 and over, 50 and over, 55 and over, and 60 and over.

Family and friends of the participants are welcome to wait at the finish line, with the first finishers expected to arrive at approximately 1 p.m.

This year’s race includes the first inclusion of an Unlimited Division which approves the use of ultra-light canoes weighing in at about half the heft of the traditional koa and fiberglass canoes.

The Junior Divisions will host the youngest and newest racers to the event and anticipates higher participation than previous years.

The Hawaiian Airlines Nā Wahine o Ke Kai Canoe Race is made possible by its many supportive sponsors including the race’s title sponsor, Hawaiian Airlines as well as key partners, the State of Hawaiʻi-DLNR and the Island of Molokaʻi.