The Honoapiʻilani Highway is now OPEN in both directions in the area of the “Pali.” Intermittent closures are possible overnight as crews continue to battle a large brush fire in the West Maui Mountains.

Police advise that the fire is still burning however it is not threatening the roadway at this time. Motorists are reminded to follow the instructions of officers.

Fire personnel continue to monitor the fire throughout tonight and into Thursday morning.

Kahekili Highway (the back road through Kahakuloa) is now open in both directions.  Traffic on the Waiheʻe side of the roadway is being re-routed back through Waiheʻe, according to Maui police.

Maui police are preparing to reopen the Honoapiʻilani Highway in both directions. Motorists are reminded that road conditions and closures may change immediately and without warning, and intermittent closures are possible as crews continue to battle a large brush fire in the West Maui Mountains.

Police advise that the fire is still burning however it is not threatening the roadway at this time. Motorists are reminded to follow the instructions of officers.

Fire personnel continue to monitor the fire throughout tonight and into Thursday morning.

Officers will begin contra-flowing traffic along Honoapiʻilani Highway between Māʻalaea and Ukumehame. Motorists are asked to exercise patience as we try to move traffic through the area. Please keep in mind, the contra-flow will be maintained as long as fire conditions permit.

The Maui Fire Department continues to battle the Māʻalaea Mauka brush fire that has grown to approximately 4,100 acres in size. Fire personnel will continue to monitor the fire overnight into tomorrow morning.

The “Pali” fire has now scorched 4,000 acres and has reached the Papalaua Wayside Park area.

The fire approached the roadside in Māʻalaea earlier this evening, prompting the evacuation of nearby residents and businesses on Māʻalaea Bay Road.

Emergency Shelters are now opened at Maui High School in Kahului and Princess Nahiʻenaʻena Elementary School in Lahaina at 7 p.m.  County officials also issued a clarification saying that Velma McWayne Santos Community Center is serving as a temporary shelter from 6:30 p.m. to 9 p.m.

King’s Cathedral in Kahului will also open up its doors to the public at 5:30 p.m. and will provide food, but will not be serving as a shelter.

These are evacuation shelters to provide respite only. There will be no supplies or sleeping accommodations. If you are seeking shelter tonight, you are advised to bring your own water and food, and any bedding if possible.

In addition to the fire burning along the “Pali” section of the Honoapiʻilani Highway, there is also a brush fire in Wailuku near Waiʻinu Road and Mahalani Street.  That fire has burned approximately four acres and crews are currently conducting mop up operations in the area.

The County Emergency Operations Center has been partially activated.

Police are also posted at Mile 7 in Kahakuloa and at Nākālele Point. That location only is alternating traffic every half an hour and is not recommended as an alternate route due to the treacherous conditions and inability for motorists to maneuver around oncoming traffic at narrow areas of the road.

Motorists are advised that road conditions and closures may change immediately and without warning.

The fire was first reported at around 9:10 a.m. on the upper slopes of the West Maui Mountains in Māʻalaea.

Below is a list of road closures that the county sent out in a press release:

Fire officials say the blaze is under control in parts of the pali, but but flames have spread to a patch of kiawe trees extending from the base of the pali to Thousand Peaks beach park.

Officials say the new flames span about 100 yards along the highway.

Honoapiʻilani Highway remains closed in both directions as fire crews battle the brush fire that continues to burn through the Pali.

According to an announcement from the county, the fire has scorched about 375 acres as of 1 p.m. Fire officials also noted that acces to the fire is limited due to the areaʻs “extremely steep terrain.”

The county is asking motorists to drive slowly to ensure the safety of fire and police personnel.

Traffic traveling out of Lahaina and towards Kahului airport has been allowed intermittently, but the county is advising visitors to cancel travel plans with their airlines in case the fire closes the road for an extended period of time.

Mayor Michael Victorino drove to the pali to survey the fire and thank safety personnel.

“I want to ask all of our visitors and residents stay away from the Pali area and not to drive to the west side,” Mayor Michael Victorino said in the announcement.

“Heavy smoke and strong winds are making visibility very difficult and the speed of the fire poses a serious safety hazard to the public. I will be doing everything I can to provide the support our first responders need and I’m very grateful for their efforts.”

Per Maui Police – Honoapiilani Highway is still closed to traffic in both directions.  Kahekili Highway will also be closed from Waihee to DT Fleming beach Park. 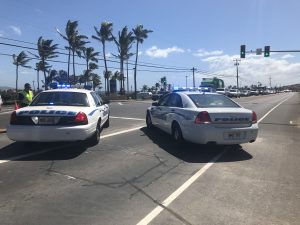 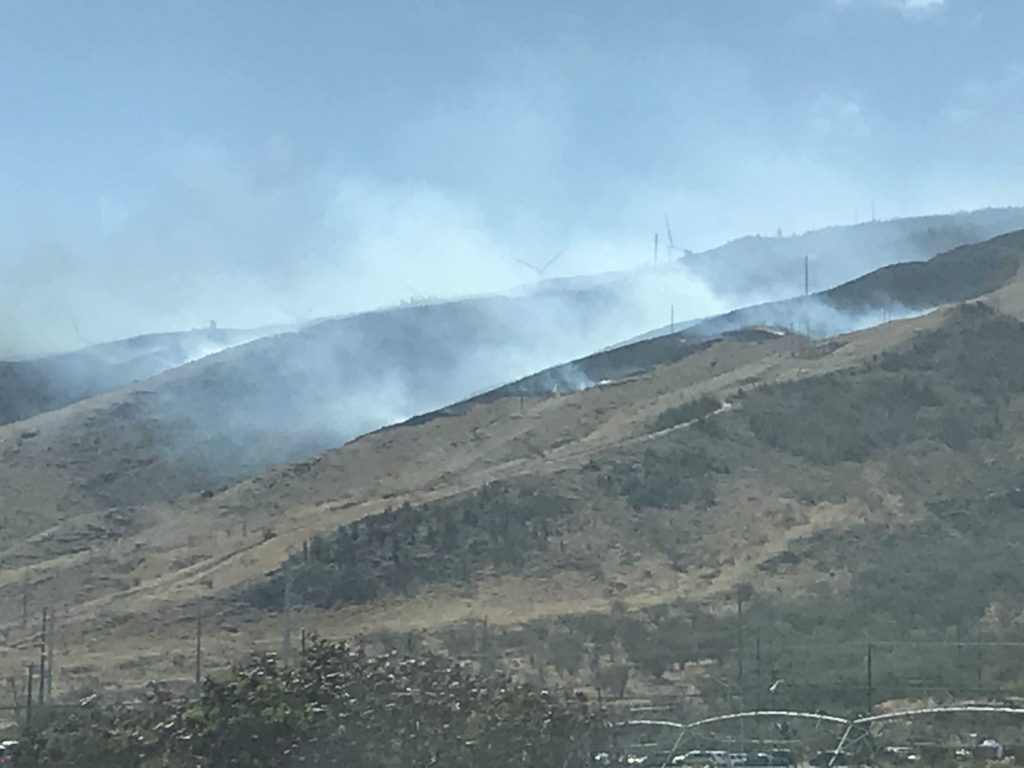 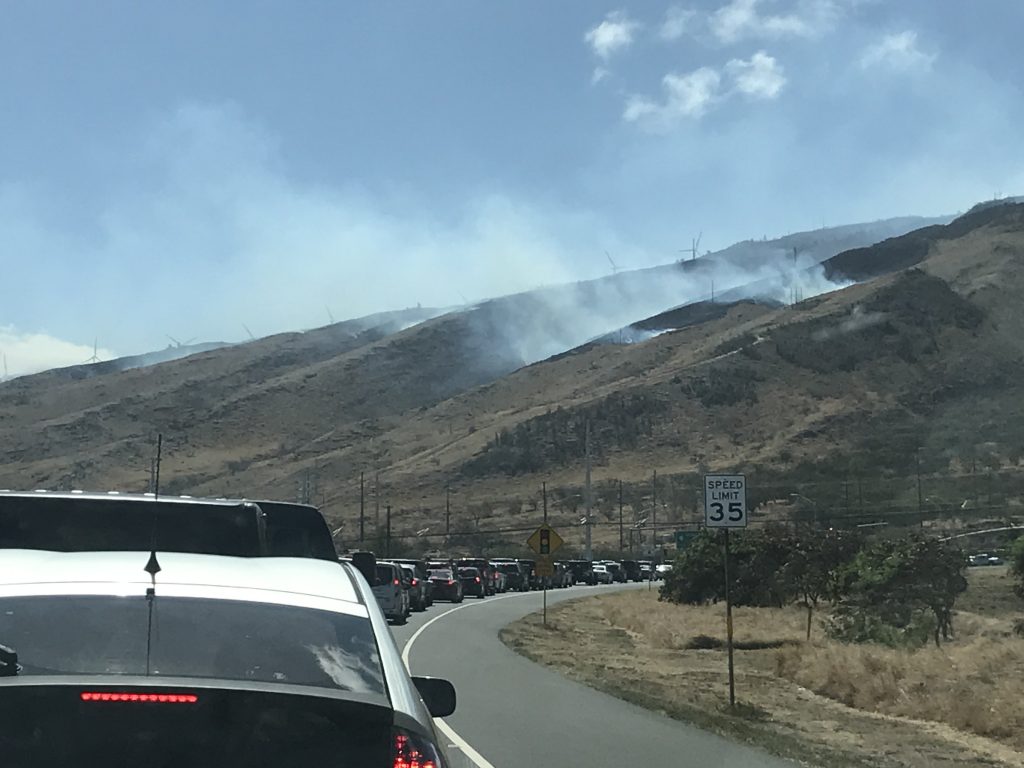 Traffic backed up along Kuihelani Highway in the westbound direction as fire crews battle the brush fire. Photo: ʻAʻaliʻi Dukelow.

Honoapiʻilani Highway is now closed beginning at Maʻalaea. Fire officials say there is heavy smoke and the blaze is impinging on the highway.

Fire officials are closing off Honoapiʻilani Highway in near the pali scenic lookout, as the blaze has expanded to the roadʻs shoulders on the Wailuku side of the tunnel.

Fire officials have been receiving reports that the fire has spread to Honoapiʻilani Highway near the Wailuku side of the Pali tunnel.

There is currently a brush fire on the upper slopes of the mountain in the vicinity of the North Kīhei Road/Honoapiʻilani Highway intersection.

Maui Fire Chief, Rylan Yatsushiro said that due to the extremely steep terrain, access to this fire is limited. Engine 1 is attempting to make access to this fire, while Air 1 is currently making water drops. A second helicopter has been dispatched for air support as well.

Forestry personnel from the Department of Land and Natural Resources are also on scene to assist with firefighting efforts. At last report, the fire had burned approximately five acres and was spreading uphill and towards the windmills.

Kaheawa Windfarm personnel are currently being notified to evacuate. Checks are also being made to evacuate any hikers that may be on the “Pali” hiking trail. 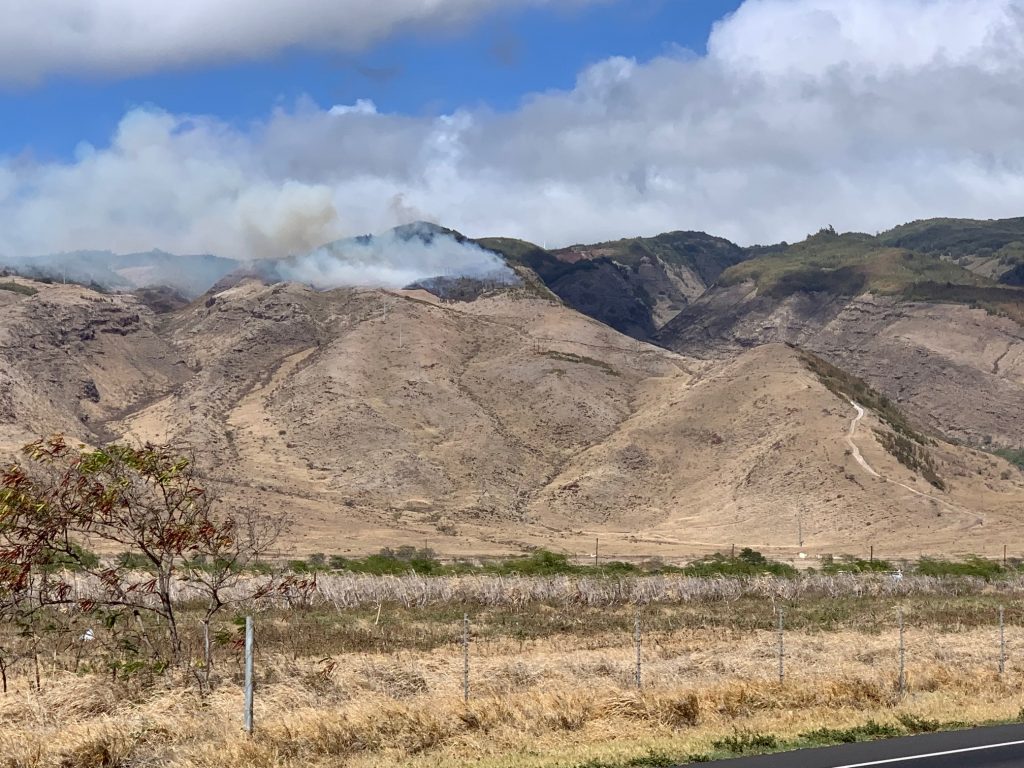 Maui Fire Department personnel are responding to reports of a brush fire off Honoapiʻilani Highway in an area between the scenic lookout and Olowalu.

Fire officials say the fire seems to have broken out in a gulch mauka of the highway along the “Pali” hiking trail. The fire was last reported above utility road and burning uphill towards the wind farm.

The parking lot and rest of the wind mill farm area has been evacuated as a precaution. Officials also noted that the blaze does not seem to be affecting traffic.