During a proclamation signing on Friday, Mayor Michael Victorino said the recognition was “a long time in coming.”

“You should have never had to hide in the first place,” Victorino said to a few dozens of LGBTQ+ community members and advocates who gathered in the mayorʻs conference room for the proclamation.

“I have family, right here is one example, and others, that within their own families, were rejected,” Victorino said pointing to his cousin, Bene Cambra, sitting in the audience.

Cambra recalled that some of her immediate family members rejected her after she came out in the late ʻ70s.

Born and raised on the mainland, Cambra moved to Maui about 12 years ago. She said people on Maui are more “inclusive” of LGBTQ+ individuals. 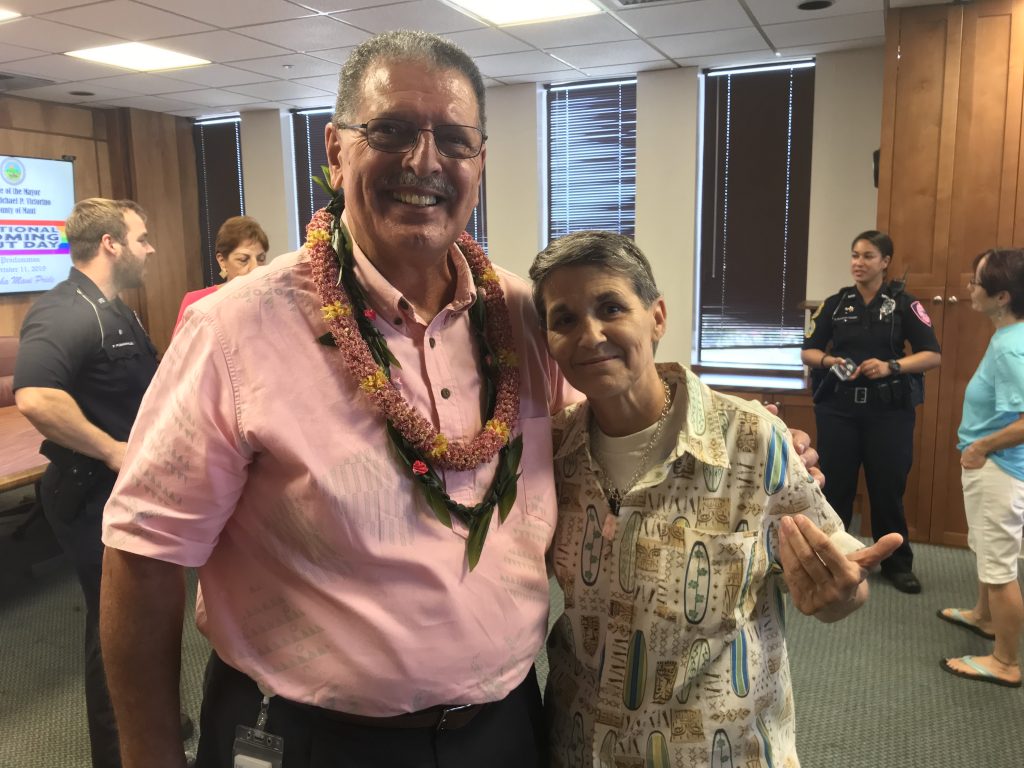 Mayor Michael Victorino and his cousin Bene Cambra pose for a photograph after Fridayʻs proclamation.

“I think thereʻs so much more openness here on the island, so Iʻm proud to be a part of that,” Cambra said.

“Whereas today, young people feel very comfortable exploring themselves and their sexual identity, in my day, it was more, this is what you did, you met a boyfriend and you felt comfortable and thatʻs the direction you went,” Debevec said.

The proclamation came ahead AMPʻs first-ever pride festival on Saturday, which hosted several hundreds at the VFW Hall in Kīhei.

The festival was a part of a series of local festivities organized for Maui Pride Week, which started on Oct. 6.

Debevec called the festival “an opportunity for the community to come out, show support, meet other people, and have the opportunity to wear their colors and express themselves.”

Victorino commended the members of the AMP during Fridayʻs proclamation for their efforts to change the “status quo.”

“If we canʻt teach the right things today, then future generations will have problems and itʻs going to fall on us,” Victorino asserted.

The mayorʻs words were met with praise and thanks from crowd members, including Cambra.