No injuries were reported after an armed robbery occurred on Front Street in Lahaina earlier today.

The male suspect was reportedly wearing a Halloween costume of a “dark colored robe” and a mask when he approached a sales representative with a firearm in one of the Front Street businesses at about 12:16 p.m.

According to the representative, the suspect demanded merchandise from a display case. A release from the Maui Police Department noted that the item was of value that “has not yet been determined by the business.”

The suspect then fled the store.

Maui police officers from the Lahaina Patrol Division conducted “extensive checks” of the area but were unable to locate the suspect.

MPD did not mention any modifications to Halloween festivities on Front Street as a result of this incident.

This investigation is on-going. 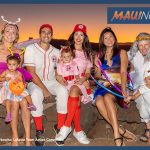 Costume-Clad Revelers Show Off Their Creativity at Lahaina Halloween Contest