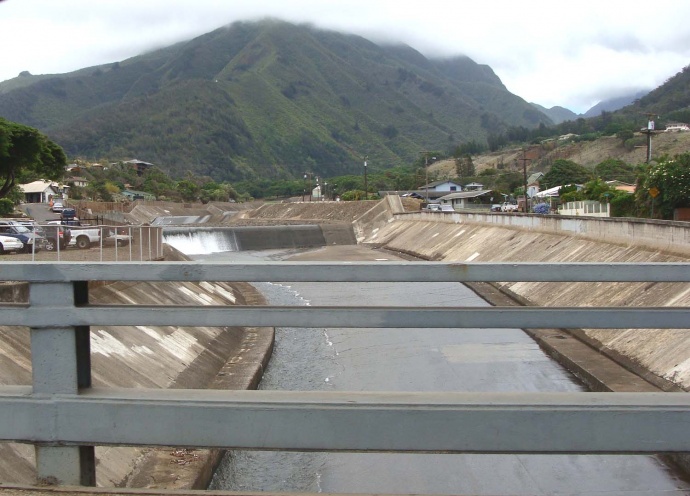 The case sought to further amend and increase the Interim Instream Flow Standards in all four waterways that comprise Nā Wai ʻEhā.  Advocacy groups also sought to finalize the 75+ Water Use Permittee Applicants and their water allocations.

During the hearing, Mahi Pono representatives announced a new settlement with the Hui and the Office of Hawaiian Affairs–to divert about 11.22 million of gallons of surface water daily from Nā Wai ʻEhā streams.

Thatʻs less than half of the 36 mgd the Hawaiʻi Commercial and Sugar Co. requested over a decade ago for its now shuttered sugarcane operation in Central Maui. A hearings officer previously proposed 15.65 mgd, 28 percent more than the agreed allocation.

Mahi Pono representatives say the water would be irrigated from Nā Wai ʻEhā streams to feed its 3,740 acres of farmland in the “Waiheʻe-Hopoi” region.

Those fields, which span between Kuihelani Highway and Maui Veterans Highway, will be cultivated for diversified agriculture. Mahi Pono affirmed at todayʻs meeting that they will only use water for farming purposes, and not for residential developments.

“Under this settlement, water will be requested and delivered…only when needed, and only in quantities equating to the requirement for crop irrigation. This will leave as much water as possible in the streams while allowing Mahi Pono to grow fresh, local, and GMO-free food for the Maui community,” a press release from the farming company read.

“Mahi Pono’s commitment to efficiently use water starts with changing the way surface water has historically been diverted and delivered. In the past, the maximum amount of water was diverted from Nā Wai ʻEhā streams in order to irrigate sugar cane.”

During the meeting, which drew a full house at the J. Walter Cameron Center auditorium, members of the commission commended the parties involved for reaching a consensus.

“Weʻre trying to pave a new roadway for Nā Wai ʻEhā to push commmunity-based resource management and turn the clock, manage the way our kūpuna (ancestors) did,” Pellegrino said.

Mahi Pono representatives also said they committed $250,000 to investigating losses in their section of the water delivery system, which they take “very seriously.”

In an effort to “facilitate communication and public transparency,” the company also promised to provide data on its water diversions, deliveries and uses to the public. Mahi Pono said it will allow representatives from the Hui and OHA on site visits of diversions, ditches, and farm operations “on a quarterly basis or more.”

Other commitments the company announced–bypass the Waiʻalae reservoir to avoid seepage losses of 6 to 8 million gallons per day, close the low-flow intake for the Spreckels Ditch on Wailuku River, help ʻauwai (ditch) restoration efforts in Waiheʻe, and revitalizing native shrubland areas.

In addition to these commitments, Mahi Pono said it also supports the Hui’s and OHA’s recommended IIFS.

Company representatives referred to todayʻs announcement as a start to a “promising path forward.”

The settlement now awaits approval from the commission.