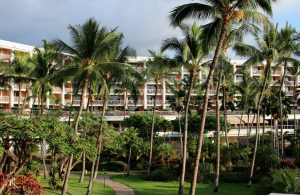 Native Hawaiian activists are expressing disapproval over proposed development at the Grand Wailea Resort, which they argue would disturb iwi kūpuna, or human remains.

Members of Mālama Kakanilua, the Pele Defense Fund and Hoʻoponopono ʻO Mākena have filed a petition to intervene on a Special Management Area Use permit that the resort recently filed for.

An SMA Use permit is intended to regulate construction projects valued at $500,000 or more, or that could have a “significant adverse environmental or ecological effect” on a specially managed area, according to the county.

“We are committed to continuing an open dialogue about our thoughtful plans to update and improve Grand Wailea,” the resortʻs managing director JP Oliver said.

“We understand we have a tremendous responsibility to be diligent stewards of the Hawaiian culture, ensuring it is respected, protected and celebrated. We’re dedicated to developing a plan to preserve the cultural history of the resort and surrounding areas.”

However, community organizers claim that the resort, which opened its doors in 1991, was built on sacred burial grounds.

Several hundreds of remains have been detected throughout the site and relocated for construction.

“We want to prevent them from any further digging in this known burial area,” said Clare Apana of Mālama Kakanilua.

Apana added that the digging of iwi kūpuna induces “psychological trauma” for descendants.

The organizers are also demanding that the iwi kūpuna be returned to their original resting place.

The petitioners said they have repeatedly asked resort representatives for a comprehensive report on the disposition of all unearthed iwi kūpuna, but have not received one.

Last week, hotel owners announced that they have allocated $75,000 for historic and cultural preservation efforts.