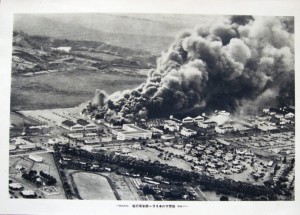 Ephemera shows the bombing of Pearl Harbor as seen from the Japanese planes. Susan Halas photo.

More than 2,400 American patriots were killed during the attack on Pearl Harbor 78 years ago today.

In honor of the lives lost, Sen. Brian Schatz issued the following statement:

“Today, we remember their service, salute their heroism, and honor their families. We also give thanks to the veterans and survivors who answered the call to defend our nation. The Greatest Generation faced one of the darkest moments in human history with bravery and resolve. They achieved what President Roosevelt foretold would be their inevitable triumph: they defeated the forces of tyranny and secured freedom for all the generations that followed. Let us draw from their strength, learn from their love of country, and always strive to live up to their example.”

“Seventy-eight years ago, our country was awakened to death and destruction in our homeland. As we remember the more than 2,400 Americans killed in this attack, we also salute every veteran who served in World War II. We are eternally grateful for the sacrifices of those whose courage and resolve preserved our freedoms and way of life,” Loren said.

A ceremony was held at the Pearl Harbor Visitor Center on Oʻahu this morning to pay tribute to those who have fallen during the tragedy.