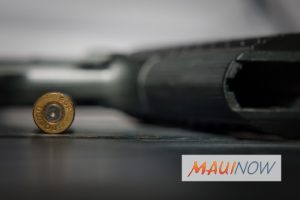 A 42-year-old male has been arrested for shooting a 31-year-old male victim Thursday night, according to a Maui Police Department press release.

The incident was reported at about 9:40 p.m. However, the location of the incident has not been specified in the briefly-worded press release.

After an initial investigation, officers from the Wailuku Patrol Division found that the victim was shot in the left leg. He was later transported to the Maui Memorial Medical Center for treatment.

The suspect was taken to the Wailuku Police Station.

This is an ongoing investigation.

Updates will be provided as they develop.