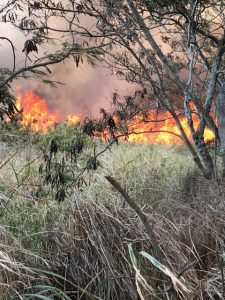 There were no reported injuries or property damage. All roads have been reopened.

The fire is now 30 percent contained, according to county officials.

Officials say no structures are threatened and no injuries or damages have been reported.

Fire crews will continue efforts to contain the 578-acre blaze throughout the night.

This will be the last update from the county.

Baldwin Avenue has been reopened in both directions up to Skill Village. However, the road remains closed from Skill Village to Pāʻia Elementary School.

Police say Skill Village residents are no longer being asked to stay in their homes, as it is now safe to leave.

There are no current evacuations.

The status of containment remains unclear.

A brush fire that has prompted evacuations near Baldwin Avenue in Pāʻia has now scorched about 340 acres, according to county officials.

Skill Village residents in Pāʻia are being asked to stay in their homes to keep roadways clear for emergency vehicles and because of thick smoke along Baldwin Avenue.

Police officers are responding to calls of people with breathing problems from the heavy smoke.

Mayor Michael Victorino is asking the public to remain vigilant and avoid the area.

“I thank firefighters, police, private water tanker crews and other first responders for acting quickly in responding to this blaze,” Mayor Victorino said in a press release.

The size of the brush fire was not immediately available.

A few structures near Baldwin Avenue in Pāʻia have been evacuated this afternoon due to a rapidly spreading brush fire, officials announced.

The blaze prompted the closure of Baldwin Avenue between the Old Mill and Pāʻia School.Pāʻia School and the Pāʻia Gym have been evacuated.

Several residents in the area are experiencing power outages, as the Maui Electric Company has de-energized homes to support response efforts. Drivers are being asked to exercise caution, as some traffic lights may be affected by the outage.

Fire officials say the flames broke out at about 1 p.m. off Holomua road behind Doris Todd Academy and is moving in the makai direction.

The size of the fire is unknown at this time.

Updates will be provided as they become available.

Fire crews are battling a brush fire that broke out near the Old Maui High School Campus off of Holomua Road, officials announced on Facebook.

The blaze prompted the closure of Baldwin Avenue between the Old Mill and Pāʻia School.

Officials are urging the public to avoid the area.