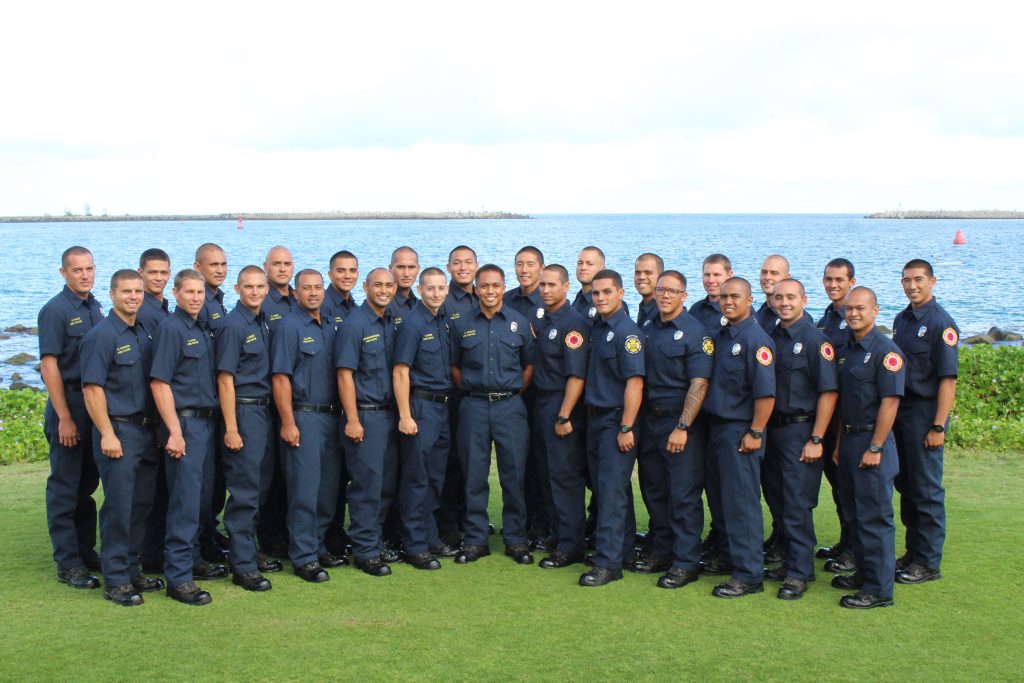 Twenty-seven firefighter recruits graduated as part of the 35th Firefighter Recruit Class of the Maui Department of Fire & Public Safety. A graduation ceremony was held on Friday, Dec. 27 at the Maui Beach Hotel in Kahului.

The recruits graduated from the Maui fire Department’s 22 week Recruit Training Program, designed to train and evaluate fire recruits on the many skills and disciplines necessary to serve the public as a firefighter.

Recruits received their badges and took their oath, with each recruit selecting a special family member to carry out the traditional “Pinning of the Badge.”

Maui Fire Chief David Thyne delivered the Firefighter’s Oath of Office while graduating recruits were presented with awards, recognizing those who finished at the top of their class in the following categories.

Academics Award – Chad Tokunaga: Presented to the recruit with the highest scholastic average on all written course examinations administered throughout the training program.

Functional Skills – Dane Walin: Presented to the recruit who demonstrated the highest competency in functional skills assessments throughout the training program.

Team – Ethan Frederick and Kendall Willing: Presented to the two-man team who demonstrated the ability to perform complex hands-on drills under high-pressure situations, with the highest degree of expedience and efficiency.

Firefighter Spirit, Hoʻulu Award – Avinash Singh: Named in honor of the late Fire Captain, Charles Iwata, this award honors the true passion and firefighter spirit that Captain Iwata was so widely known for. This award is presented to the recruit who displayed a high moral character and exceptional attitude, and whose conduct expresses respect and heart towards others, and to the firefighting profession.

Most Outstanding, Overall – Brian Pali: Selected by recruit training officers, this award is presented to the recruit that excelled in every phase of recruit training, and demonstrated outstanding leadership ability, projected an exceptional attitude, and led their class in physical fitness performance.