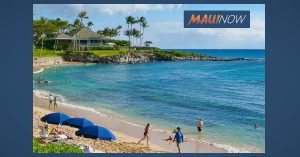 A 33-year-old California man died after drowning in Kapalua Bay on Saturday.

Fire officials say witnesses found the victim at the bottom of the ocean about 30 yards off the shore of the Montage Resort at about 1:12 p.m.

A few bystanders and hotel security personnel were performing CPR on the unresponsive male before fire personnel took over resuscitation efforts.

According to a press release from the fire department, the man was snorkeling in “calm” ocean conditions before he was found.

Despite all lifesaving efforts, medics pronounced the victim dead at the scene.