President Donald Trump addressed the nation this morning, providing remarks in the wake of last night’s Iranian attack on US occupied bases in Iraq.

“We suffered no casualties.  All of our soldiers are safe and only minimal damage was sustained at our military bases.  Our great American forces are prepared for anything,” said President Trump.

In response, President Trump said new sanctions will be imposed on Iran.

“As we continue to evaluate options in response to Iranian aggression, the United States will immediately impose additional punishing economic sanctions on the Iranian regime. These powerful sanctions will remain until Iran changes its behavior,” said President Trump.

“In recent months alone, Iran has seized ships in international waters, fired an unprovoked strike on Saudi Arabia, and shot down two US drones.  Iran’s hostilities substantially increased after the foolish Iran nuclear deal was signed in 2013,” said President Trump.

President Trump also provided assurances that Iran’s pursuit of nuclear weapons will not be allowed.

“I salute the incredible skill and courage of America’s men and women in uniform. For far too long, all the way back to 1979 to be exact, nations have tolerated Iran’s destructive and destabilizing behavior in the Middle East and beyond.  Those days are over.  Iran has been the leading sponsor of terrorism and their pursuit of nuclear weapons threatens the civilized world. We will never let that happen,” said President Trump.

President Trump said precautions taken with the dispersal of forces and an early warning system.  This resulted in no American or Iraqi lives being lost in last night’s attack.

The regime initiated yesterday’s attack after the US-ordered elimination of Iranian General Qasem Soleimani last week.  DOD officials said that US military action last week was aimed at deterring future Iranian attack plans and came on the heels of the Soleimani-orchestrated attacks on the US Embassy in Baghdad.

This morning, President Trump said, “Iran appears to be standing down, which is a good thing for all parties concerned and a very good thing for the world.” 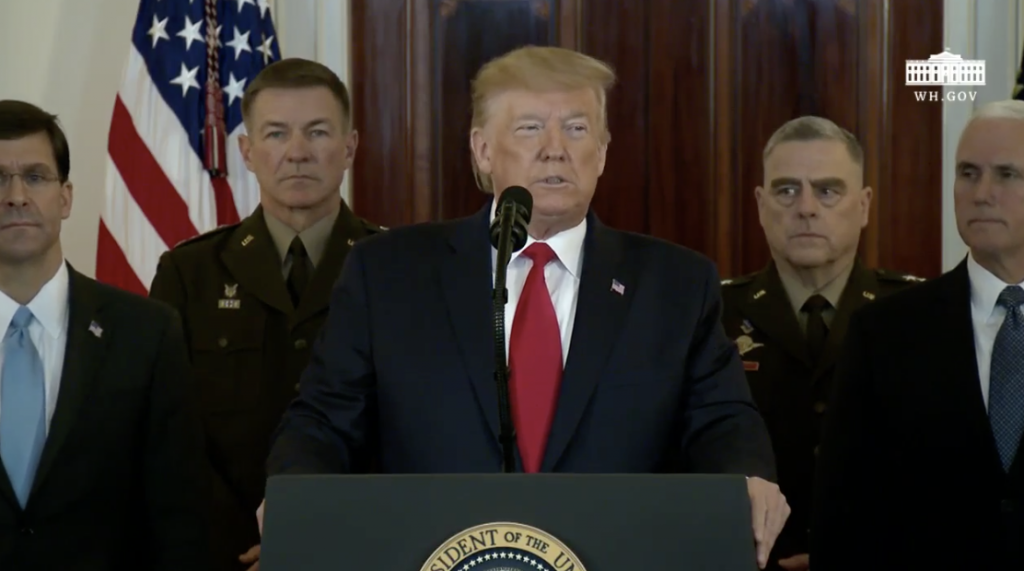