A preliminary accident report released by the National Transportation Safety Board was released today, detailing initial findings involving a fatal tour helicopter crash on Kauaʻi that claimed the lives of seven on board last month.

The report notes that the accident flight was the pilot’s eighth and last scheduled 50-minute aerial tour flight of the day.

The NTSB report states that the Airbus AS350 B2 helicopter, operated by Safari Aviation (dba Safari Helicopters), was destroyed on impact forces and a post-crash fire when it collided with terrain about 24 miles northwest of Līhuʻe.

The commercial pilot and six passengers were fatally injured.  Kauaʻi police had identified those aboard as:

According to the preliminary NTSB report, an air tour pilot from a different company reported that he heard the accident pilot report “Upper Mic,” at around 4:32 p.m., which was a compulsory air tour reporting point that indicated the accident helicopter was exiting the Waimea Canyon and beginning a transition over to the Nā Pali coastline via Kōkeʻe State Park.

At around 5:31 p.m., 10 minutes after the accident helicopter was due to arrive back at Līhuʻe Airport, an employee for Safari Helicopters notified the company’s director of operations that the helicopter was overdue, and flight-locating procedures began.

“All of the helicopter’s major components were located within the debris field, and the wreckage was largely consumed by a post-crash fire,” the report said.

A witness located about 1.5 to 1.75 miles up the Nuʻalolo Trail within the Kōkeʻe State Park near the time of the accident reported weather conditions of about 20-foot visibility in rain and fog. He heard what he described as “a hovering helicopter followed by a high-pitched whine,” according to the NTSB preliminary report.  “Knowing something was wrong, he attempted to locate the helicopter but was unable due to the adverse weather conditions and fading daylight,” according to the NTSB report.

Typical tour route to Upper Mic with approximate accident site and witness location depicted. The NTSB notes that the helicopter did not have flight tracking equipment on board, so the exact flight path is unavailable. PC: NTSB accident report / Google earth. 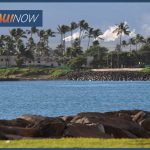 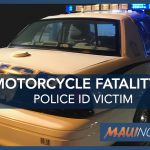