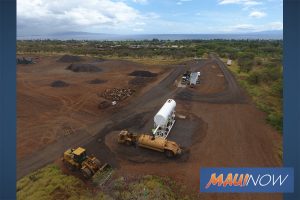 Since its launch in 2018, Hawai’i Materials Recycling says it has saved Maui County taxpayers millions of dollars.

According to company co-owner Pete Sullivan, the company has accepted an estimated 155,000 tons of inert material–concrete, asphalt, sand, rock, and dirt, over a span of 16 months.

“If we looked at 155,000 tons, it equates to roughly 103,000 yards, and some years ago I was told by the Director of the Department of Environmental Management that it costs $77 per cubic yard to make landfill space,” Sullivan said in a press release.

“So the simple math equals about $7.93 million that the county and we as taxpayers will not have to spend, because we diverted that from the landfill.”

That equals about 6,200 truck loads (at 25 tons per truck load) dropped off at the HMR site off East Welakahao Road in Kīhei.

At the site, trucks can dump their waste and get what they need by loading up on-site. The company says the process saves $875,000 in trucking costs.

After all costs and prices are considered, HMR has saved the public and county around $13 million.

“The amount of money is really astronomical that these kinds of operations save the County in the long run,” Maui County Councilperson Kelly King added.

“We’re beyond the point where we can just throw our trash away and not worry about it; we have to be responsible for all our waste and if we know it’s coming to a place like this, that’s the responsible thing to do.”

Since HMR is not a quarry, all products sold are from recycled material with no blasting or drilling into the earth.

In addition, HMR’s scale and scale house office is fully powered by solar panels. The company also only uses recycled water from the nearby Maui County Wastewater Reclamation Facility.

“We’re here to take care of this land; we treat our ownership of this property as more of a responsibility to do what is right by the land and the people,” said Scott Meidell, Senior Vice President of Haleakalā Ranch.

“We’ve been at this for 131 years and I’m very proud to work for a company that emphasizes the need for stewardship, and I think that’s an apt characterization of what projects like these are.” 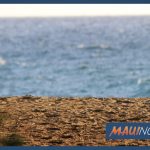