In the 14-page complaint, Rep. Gabbard, who is running for president, alleges that Clinton lied “publicly, unambiguously” and with “malicious intent.”  The lawsuit says Gabbard “seeks to hold Clinton, and the political elites who enable her, accountable for distorting the truth in the middle of a critical Presidential election.”

The complaint points to comments made during an Oct. 17, 2019 interview (34 minutes into the podcast) in which Clinton spoke on a Campaign HQ podcast distributed by radio.com and hosted by David Plouffe, President Barack Obama’s former campaign manager.

In the podcast, Clinton said “somebody who is currently in the Democratic primary … [is a] favorite of the Russians… Yeah, she’s a Russian asset.”

Although Clinton did not name Gabbard, the press “extensively published and disseminated these statements, which were interpreted widely as Clinton asserting that Gabbard is a Russian asset,” according a press release issued by Gabbard’s attorneys.

The complaint Tulsi Gabbard and Tulsi Now, Inc. v. Hilary Rodham Clinton, was filed in US District Court in the Southern District of New York, and is available here.

Rep. Gabbard asserts in her complaint that “Clinton deliberately and maliciously made false statements in an attempt to derail Rep. Gabbard’s campaign, by alleging that Gabbard is a ‘Russian asset,'” according to the press release.

In a Tweet posted on Oct. 18, 2019, Nick Merrill, identified in various media reports at Clinton’s spokesperson, responded to the allegations by saying the question was “about Republicans.”

Folks, listen to the podcast. She doesn’t say the Russians are grooming anyone. It was a question about Republicans.
Cc:@VanJones68 https://t.co/xU7WAob0Ve

Maui Now was unable to make contact with Merrill, but The Hill and CNBC both reported that Merrill’s response to the lawsuit was: “that’s ridiculous.”

“Tulsi Gabbard is a loyal American congresswoman who has also dedicated her life to protecting the safety and freedom of all Americans. Her campaign continues to gain momentum, but she has seen her political and personal reputation smeared and her candidacy intentionally damaged by Clinton’s malicious and false remarks.”

“One would expect someone of Mrs. Clinton’s political background to act with a greater level of maturity and responsibility but her personal hostility toward Rep. Gabbard apparently clouded Mrs. Clinton’s reason and blinded her to U.S. defamation laws. She resorted to a damaging campaign founded on lies, and when presented with the opportunity to retract her damaging remarks, she refused. Rep. Gabbard must defend her good name and hold Mrs. Clinton responsible. This lawsuit intends to do just that.”

According to the complaint, Gabbard claims the statements made by Clinton had “no factual basis” and harmed herself, voters and the American democracy.

Gabbard is seeking an award of compensatory, special and punitive damages “in appropriate amounts to be established at trial.”

Rep. Tulsi Gabbard currently serves at the US Representative for Hawaiʻi’s 2nd congressional district.  She is also an Army National Guard Major who is running for US president in 2020. 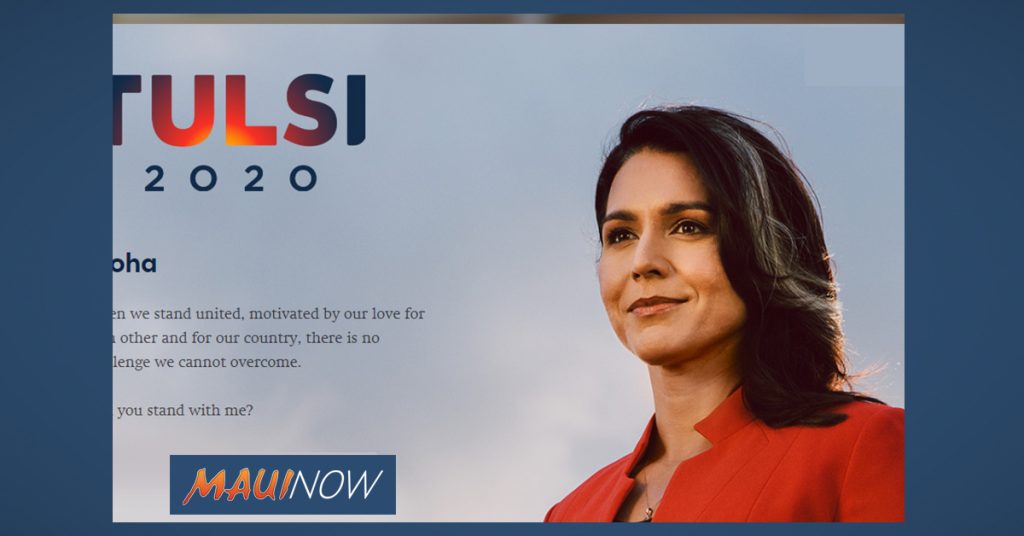