Jollibee “Home of the Famous Chickenjoy” Opens on Maui with Fanfare

Jollibee, a popular fast-food chain in the Philippines, celebrated its grand opening on Maui today, Friday, Jan. 24, 2020.  An estimated 200 people were waiting in line when the eatery opened its doors at 9 a.m.

The first customer in line, Frank Barboza of Kīhei, showed up at around 4:30 p.m. on Thursday, 16 hours ahead of opening.  He only recently experienced Jollibee during a trip to Oʻahu in April, and said he attempted to be the first at the Maui opening on a dare from his kids.

The restaurant, known through its marketing as the “Home of the Famous Chickenjoy” is located at the Maui Marketplace in Kahului at 270 Dairy Road #270, at the site of the old Bank of Hawaiʻi branch.  The Maui store employs an estimated 50 people, five of whom are management.

***(Video below is from a private blessing and soft-opening held on Thursday, Jan. 23, ahead of today’s Grand Opening celebration).***

“We’re so excited to finally inaugurate our first store on the island of Maui,” said Mari-Beth Dela Cruz, President of the Philippine Brands Group with the Jollibee Foods Corp. in North America.

Dela Cruz said Jolibee began from rather humble beginnings more than 40 years ago.  In 1975, the company’s founder and chairman and his wife opened just a couple of ice cream parlors to support the family that they were starting.  “Who would have thought then that that small business that they founded would become one of the biggest and fastest growing Asian restaurant companies four decades later.”

Jollibee Foods corporation has grown to include 15 brands with over 5,800 stores across 35 countries.  “We are proud to say that here (in the US), we continue to outpace the growth rate of the US restaurant industry, resulting in consistent double-digit growth in terms of same store sales and profits,” said Dela Cruz, noting that the company is well on its way to its 150 store objective across the United States by 2023.

“There has been a constant clamor for a Jollibee store on Maui,” said Dela Cruz.  “In fact, in our stores on Oʻahu, we actually get regular customers who fly all the way from Maui just to get their satisfaction of getting their favorites from Jollibee.”

“We realize that for many who have not returned home to the Philippines for a while, Jollibee is a comforting presence that feels like home.  With a new store on Maui, Jollibee is now, more accessible to the local community,” she said.

Dela Cruz says Hawaiʻi continues to be an important area of focus for Jollibee.  “With four successful locations on Oʻahu, we will open more Jollibee stores across the Hawaiian Islands.  We know that Hawaiʻi is home to the second largest Filipino population in the US.  Our countrymen have always been our biggest cheerleaders as we expand anywhere in the world.  And here on Maui, we have been feeling their support and are truly thankful.”

Store executives outlined three areas that they say make Maui “the perfect choice” for their first location outside of Oʻahu.  “First, the large Filipino base–46,000 strong Filipinos residing on the island of Maui alone; Second, Maui is a popular tourist destination of choice; And third, the growing immigrant population which contributes to Maui’s diverse and thriving food scene,” said Dela Cruz.

“We feel therefore that there is an opportunity in this market for another quick service brand that provides delicious food along with our brand of Joy,” she said.

The Jollibee website states that the company is best known for its “Chickenjoy,” which is delicately hand-breaded to be crispy on the outside, with a secret marinade on the inside. Other favorites are the restaurant’s sweet-style Jolly Spaghetti and Peach Mango Pie.

***This story was updated from a previous version to include Friday’s grand opening festivities. 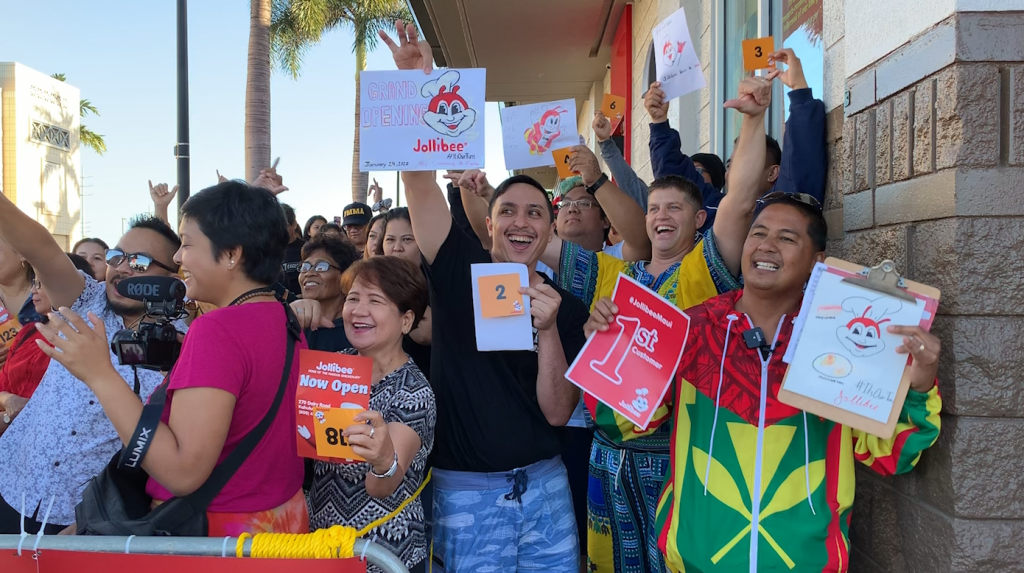 Arriving 16 hours ahead of opening at 4:55 Thursday afternoon, was Frank Barboza of Kīhei, who showed up on a dare from his kids. PC: Wendy Osher / Maui Now. 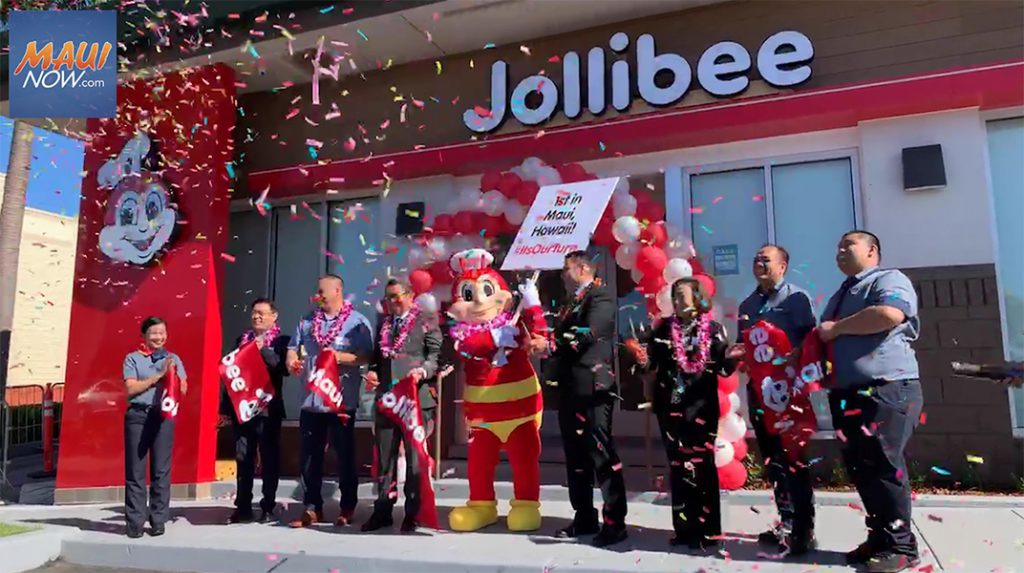 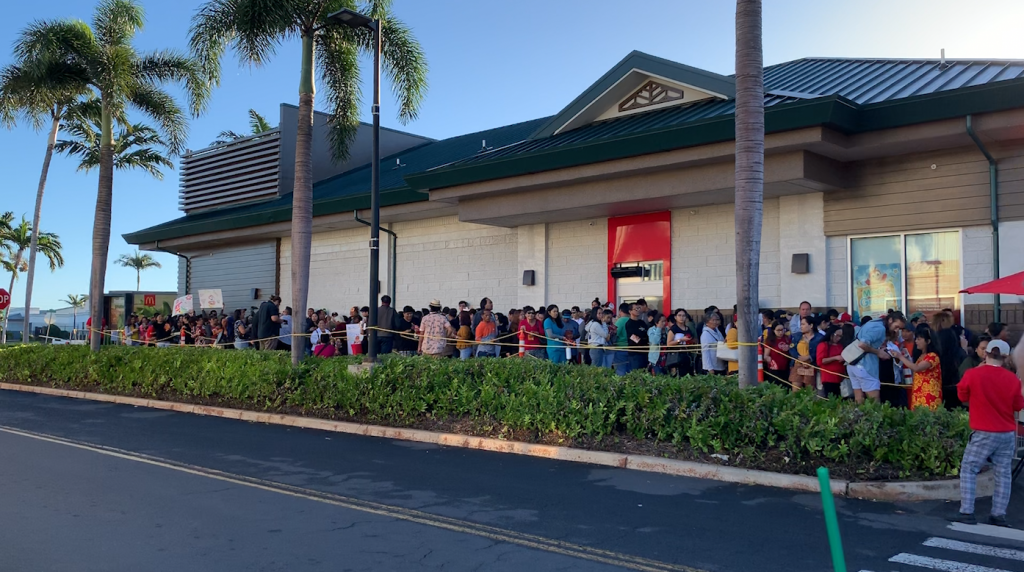 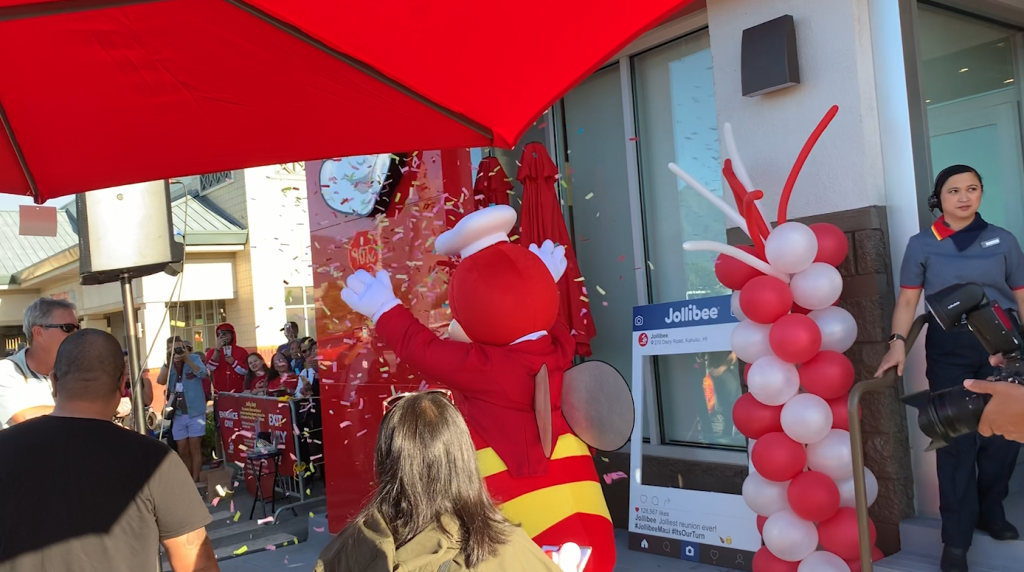 The Jollibee mascot greeted guests with a dance as part of the grand opening celebration. PC: Wendy Osher / Maui Now.