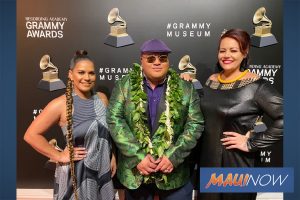 Mauiʻs own Amy Hānaiali’i Gilliom received her sixth Grammy Awards nomination for Best Regional Roots Music Album category for her album Kalawaiʻanui, which was released on May 31, 2019.

This was Hānaialiʻiʻs sixth Grammy nomination.

Traditional Gullah music group Ranky Tanky snagged the category honor during the 62nd annual Grammy Awards that was held at the Staples Center in Los Angeles on Sunday.

Also on the list of nominees was the album Hawaiian Lullaby by various artists, produced by Imua Garza and Kimié Miner.

Other contenders included: When It’s Cold – Cree Round Dance Songs from the Northern Cree; and Recorded Live at the 2019 New Orleans Jazz & Heritage Festival by Rebirth Brass Band.