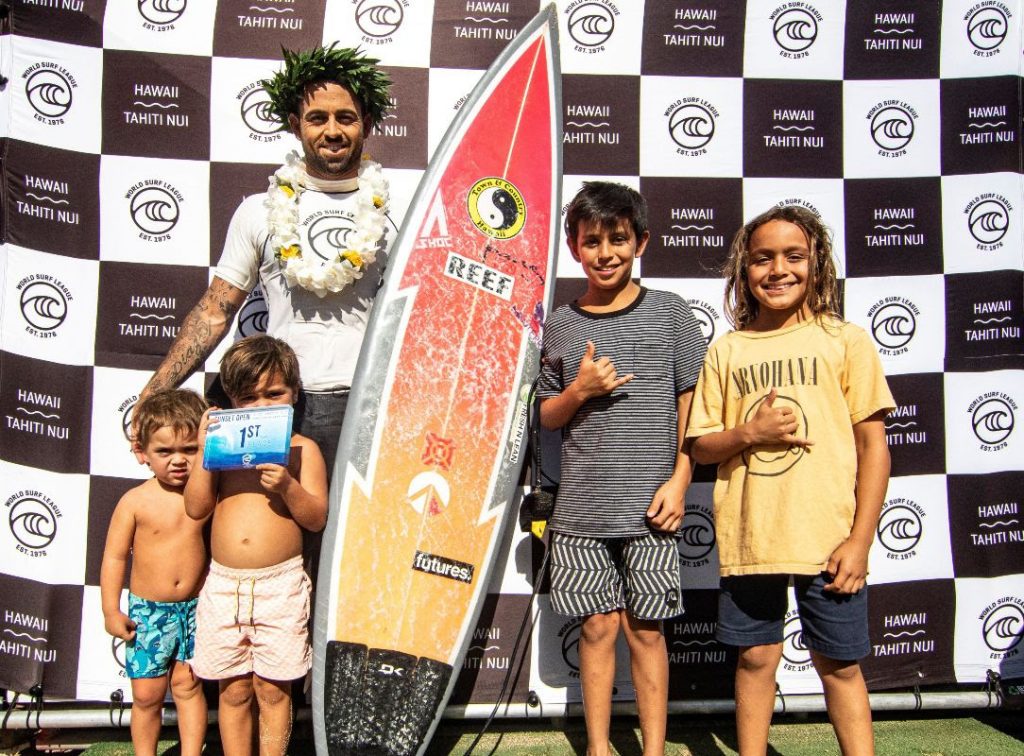 Pictured: 2020 Sunset Open winner, Billy Kemper, is inspired by Kobe Bryant to excel in surfing and to motivate the younger generation, starting with his own children, who shared today’s win with him on the podium. Credit: © WSL / Chlala

Maui’s Billy Kemper claimed his second win on Monday at the Sunset Open.

The event is part of the World Surf League Men’s Qualifying Series 1,000 and the first regional Hawaiʻi/Tahiti Nui event of 2020.

“Exalted as one of the best weeks in his life, Kemper found success at Sunset” on Monday, “and also at Maui’s Pe‘ahi after riding the wave of his life” just three days earlier, according to a WSL news release.

According to the WSL, Kemper scored an 8.50 (out of a possible 10) in the Semifinals for three powerful frontside blasts on a Sunset wall, then went on to tie Jackson Bunch (HAW) – eventual semifinalist and Sunset Pro Junior runner up – for the event’s high score, a near-perfect 9.50, in the Final.

“It’s such a great way to start the year, winning this event,” Kemper told WSL. “It brings so much confidence and flow going into the new year. I feel great, I’m just so excited. It’s been a long winter and I’m over the moon right now, I’m really happy…Every win, it’s an addiction, it’s a feeling that I’ve worked really hard towards and once I got the feeling, I just kind of became obsessed with chasing that over and over. From Pipe to Sunset to Jaws, equally, they all feel amazing, it’s like a flow state you get into.”

During his post-win interview, Kemper went on to describe the influence that Kobe Bryant, basketball legend, has had on his career. Bryant died over the weekend in a helicopter accident, which particularly impacted those within the sports industry.

Kemper called Bryant’s loss tragic for sports.  “I’ve just been someone who’s been really inspired by people who show a really hard work ethic. So much of my success I feel comes from athletes outside of surfing. They’ve motivated me to be great at what I do. In my legacy, I would love to motivate, inspire them to be great at what they do, like Kobe. Whether they’re filmers or surfers, basketball players, anything, I really want to inspire the future and I’m trying everything I can to work hard and just be a positive impact here on the North Shore.”

The Sunset Open was the first WSL Hawaii/Tahiti Nui event of 2020 and sees Kemper take a 1,000-point lead on the regional rankings, the year-long points system that will crown a winner in November. The eventual WSL Hawaii/Tahiti Nui Regional QS Winner and Runner Up will earn automatic entry into all QS and top-rated Challenger Series events for the first half of the 2021 WSL season, an excellent opportunity for athletes looking to ascend onto the Championship Tour.

Results of the Sunset Open are posted here.