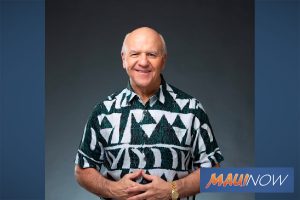 Blangiardi made his announcement in front of more than 100 supporters at Old Stadium Park in Mōʻiliʻili, a personal landmark where he played and coached football for the University of Hawaii in the sixties and seventies.

“My love for Honolulu runs deep within me, and after a 43-year career spent building and leading successful media organizations, and with so much at stake for the future of our island, I have decided to run for Mayor,” Blangiardi said in a press release.

“I sincerely believe all of my life experiences have led me to this moment in time. I understand the challenges are complex, and I may not have all the answers, but I promise to listen to the concerns of Oahu’s people, and focus on real and lasting solutions. I make three simple promises today on behalf of myself and my administration going forward – to listen carefully, to act with civility, and above all else, to act with integrity.”

The campaign announced the following community leaders will serve as campaign officers.

“Rick is the only candidate with the operational experience, humility and selfless commitment we can count on to make sure our local families can continue to call this island their home,” Campaign Chair Art Ushijima said.