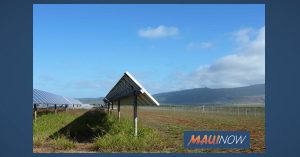 Despite lower wind energy production and a lack of geothermal resources from Hawaiʻi Island, Hawaiian Electric representatives say the company has achieved a 28 percent consolidated renewable portfolio standard in 2019.

“If Puna Geothermal Venture had not been affected by the 2018 Kīlauea eruption and operated
normally throughout 2019, it would have added an estimated 3.7 percentage points to Hawaiian
Electric’s consolidated RPS,” a press release from the company read.

“That RPS percentage would have exceeded the state mandate of 30 percent RPS by the end of 2020, which Hawaiian Electric will reach this year.”

Representatives say another limitation was the 13 percent drop in wind energy production throughout the year – 527,887 megawatt-hours, down from 602,007 in 2018.

The RPS represents the renewable energy used by customers as a percentage of total utility sales.

With solar, wind, and biofuels, Maui County reached 41 percent RPS, up from 38 percent the year before.