In 2019, Hawaiian Electric gave a total of $1,024,776 in corporate grants, contributions and sponsorships to nonprofit organizations across Maui County, Oʻahu, and Hawaiʻi Island. Of the total, more than $175,000 supported the advancement of STEM education, curriculum, and initiatives.

Hawaiian Electric also selected six employees to receive the 2019 Kōkua Community Champion Service Award, a recognition given to honor individuals who have demonstrated exemplary volunteer service in the community over the past year. The employees were judged on level of involvement and community impact. In turn, each honoree selected a nonprofit of their choice to receive a $1,000 grant from the HEI Charitable Foundation.

On Maui, Mikey Burke, a commercial account manager, serves as a board member of the Maui Facilities and Enginering Leadership Council, and is involved in two educational nonprofits with a focus on Hawaiian language. At Nā Leo Kālele, a parent and teacher hui for the Hawaiian Immersion program serving West Maui, Burke helped lead the annual Hoʻoulu fundraiser for the past four years, helping to ensure resources and supplies are provided to students. At Pūnana Leo o Lahaina, a Hawaiian language immersion preschool in her hometown, Burke is an engaged parent supporting the school through various volunteer responsibilities.  The Lahaina native awarded the $1,000 grant to Pūnana Leo o Lahaina because, “It is everyone’s kuleana to ensure a living Hawaiian language and I chose to ʻauamo that kuleana by putting our ʻohana on the path of Hawaiian language immersion education.” 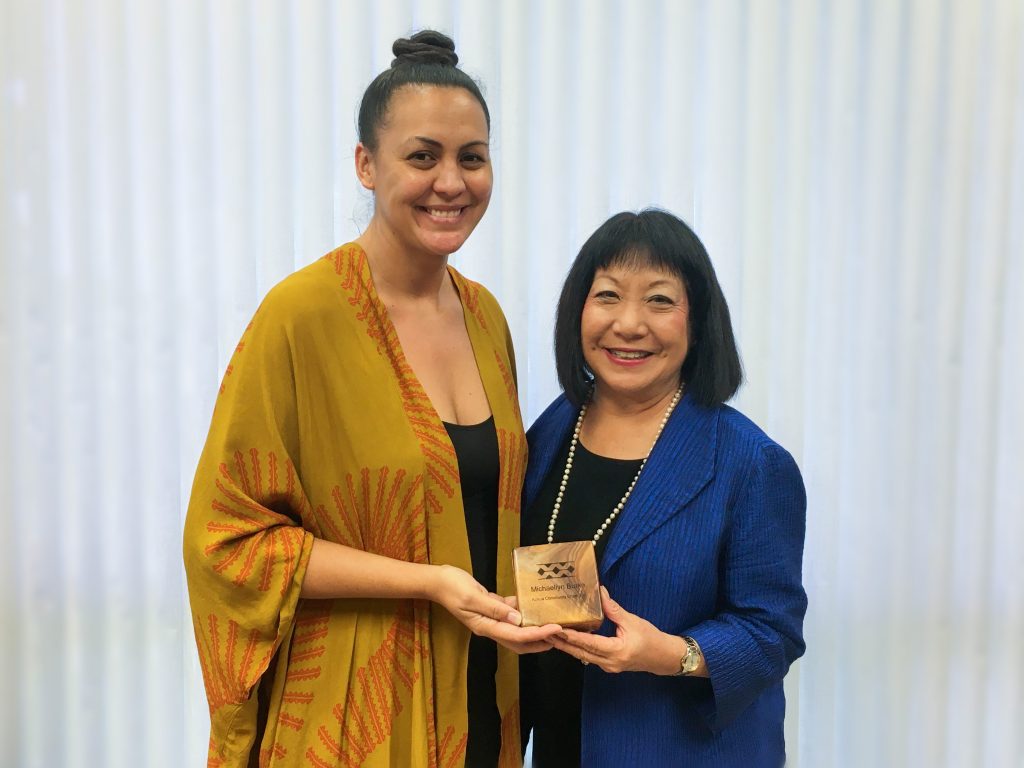 (Left) Lahaina resident Mikey Burke, a Hawaiian Electric commercial account manager, was recognized by Sharon Suzuki, Hawaiian Electric president of Maui County and Hawai‘i Island Utilities, with a 2019 Kokua Community Champion Service Award, a recognition given to honor individuals who have demonstrated exemplary volunteer service in the community over the past year. Courtesy photo.

On Hawaiʻi Island, Dave Okamura, director of engineering, was recognized for his ongoing support of the American Cancer Society’s annual Relay for Life in Hilo as the coordinator of the company team. Okamura has consistently led the company’s participation, helping to raise funds for cancer research and services to cancer patients in the local community. The Hilo native also serves as an assistant scoutmaster for the Hilo Hongwanji Boy Scout Troop, helping to prepare the scouts for life and instilling the values of the Scout Oath and Law. Okamura awarded the $1,000 grant to the Friends of Scouting, which helps fund the Boy Scouts in Hawai‘i. “I find it rewarding to see scouts grow from immature, kolohe tweens to responsible leaders,” said Okamura. “It drives me to keep improving our troop’s program and guiding the scouts to be better leaders and teammates, qualities that we value at Hawaiian Electric.”

On Oʻahu, four employees were honored for their outstanding community service:

Edmund Chang, a consulting engineer based at Waiau Power Plant, is an active volunteer with the Oʻahu Chapter and Hawaiʻi MATHCOUNTS competitions, Francis R. Montgomery Design Competition, and The American Society of Mechanical Engineers. For more than three decades, Chang has helped promote interest in math and engineering, and inspired hundreds of Hawaiʻi students to pursue STEM careers.  The Mililani resident awarded a $1,000 grant to ASME, through which he became involved in MATHCOUNTS and the Francis R. Montgomery Design Competition. ASME promotes the art, science and practice of multidisciplinary engineering and allied sciences around the world.

Conrad “Ray” Higa, operations manager for Kahe Power Plant and Campbell Industrial Park Generating Station, is active in the West Oʻahu community where he serves as chair of the Boys & Girls Club (BGCH) of Hawaiʻi Nānākuli NFL YET Center, delivers meals to the needy, volunteers as a Sunday school teacher, and assists with a program to educate at-risk youth. Last year, Higa also organized Kahe Power Plant’s first community blood drive, which helped draw first-time donors and touched the lives of 75 patients. The Nānākuli resident will split the $1,000 grant between the BGCH NFL YET and Waiʻanae BGCH because of the immense positive impact these clubs have on the children and families of West Oʻahu.

Mehana Hoʻopiʻi, a transmission and distribution engineer, has embraced the service culture at Hawaiian Electric through participation and leadership. Last year, Hoʻopiʻi spearheaded a group of employees to help with a Habitat for Humanity Build Day in Waimānalo where volunteers assisted with general construction and the start of framing and roofing a home for a family in need. A month later, she also led the company’s involvement in the Waiʻanae Parade of Farms. For the past four years, the Mōʻiliʻili resident also has been helping coach the Kaimukī High School Varsity/JV paddling team. Hoʻopiʻi selected Sustain Hawaiʻi’s Hāʻehuola Program to receive the $1,000 grant because she has been inspired by the program that draws upon local Hawaiian values, principles and practices to improve the health and well-being of Native Hawaiians.

Sean Moura, wildlife biologist and senior environmental scientist, has been instrumental in organizing the Environmental Divisionʻs official adoption of a portion of Mānoa Stream and holding twice yearly volunteer cleanup days to pick up trash along the stream and dispose of it. Last year, the Hawaii Kai resident also partnered with the Maunalua Fishpond Heritage Center to organize a workday at Kānewai Springs to help protect one of the last remaining fresh water springs in Honolulu. Moura also partnered with the nonprofits Hikaʻalani and Kauluakalana at Ulupō Nui, bringing together employees from HEI and Hawaiian Electric to help plant native trees and shrubs, clear invasive vegetation, and conduct a fish census at this sacred site in Kailua. The Lihue, Kauaʻi, native awarded the $1,000 grant to Kauluakalana, a Kailua-based nonprofit he supports because their mālama ʻāina-based mission resembles the values of his childhood upbringing.