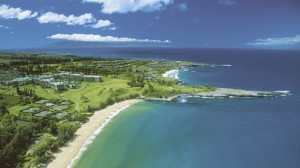 A renowned industry leader, Blackborough brings over three decades of culinary and management experience to his new role, where he will oversee all food and beverage operations for the resort. Blackborough joins The Ritz-Carlton, Kapalua from the Asia-Pacific region where he most recently served as the General Manager for the W Hotel Chang’an Beijing and Hotel Manager at The Portman Ritz-Carlton, Shanghai, China. During his time as Hotel Manager, Blackborough achieved the 2016 Greater China BMW Hotelier Awards for Hotel Manager of the Year.

Alongside his impressive management pedigree, Blackborough brings global food and beverage expertise from his previous leadership roles including, Director of Food and Beverage at the Shangri-La Hotels and Resorts, The Langham in China, and as Executive Chef at Atlantis The Palm, Dubai; Shangri-La, Singapore; Shangri-La, Pudong and Shangri-La, Jakarta.

As an Australian native, Blackborough and his family are thrilled to be welcomed into The Ritz-Carlton, Kapalua ohana and are excited to call Maui their new home.

As the Executive Assistant Manager, Rooms Division for the premiere resort, Hoy will lead all rooms operations at the hotel. Hoy returns to The Ritz-Carlton, Kapalua after spending the last several years working as Lodging Manager and Partner Services Manager for Blackberry Farm in Tennessee, a Forbes – Four Star luxury retreat. In these past roles, Hoy led the property to achieve an over 90% Guest Engagement Score. Prior to working at Blackberry Farm, Hoy was the Assistant Rooms Executive at The Ritz-Carlton, Denver where he played an influential part in achieving Denver’s first AAA 5 Diamond Hotel.

Hoy has also held previous rooms leadership roles including, Assistant Front Office Manager at both The Ritz-Carlton Reynolds, Lake Oconee and The Ritz-Carlton, Kapalua where he then was promoted to Director of Housekeeping and Laundry.

“We are delighted to have Robert join The Ritz-Carlton, Kapalua ohana and thrilled to extend Philip a warm welcome back to Maui,” General Manger, Andrew Rogers said in a press release.

“We are confident that both leaders will be a vital component to the continuous growth here at The Ritz-Carlton, Kapalua.”