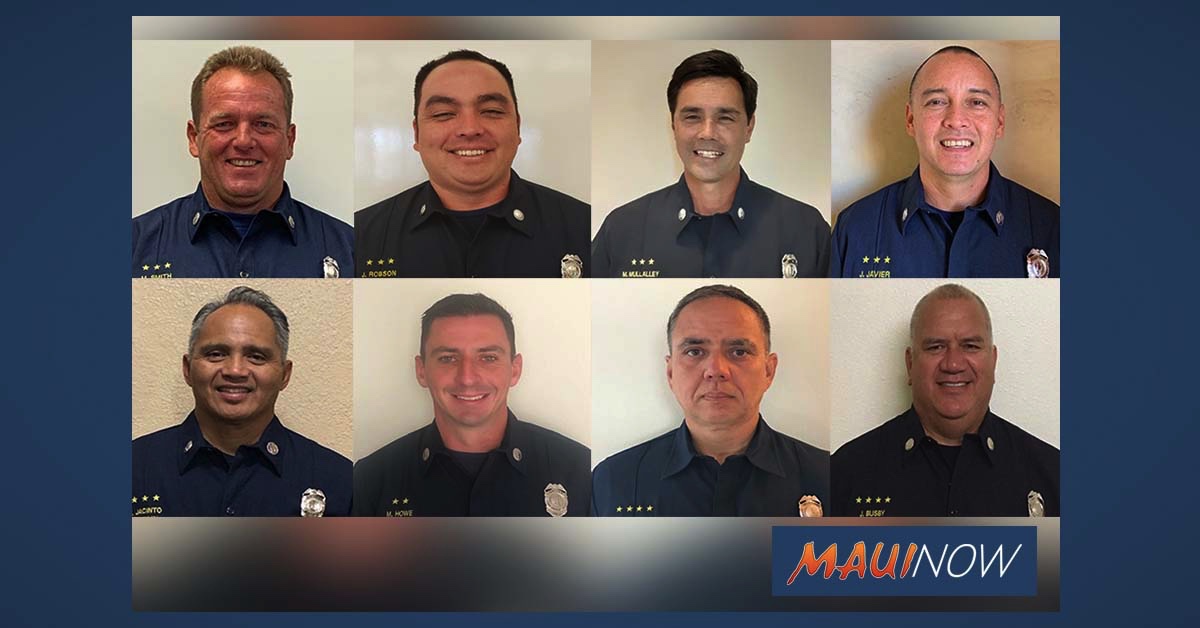 Busby is a 1988 graduate of Molokaʻi High & Intermediate. He and his wife Malia reside in Kalae, Molokaʻi with their two children.

Jeremy Javier joined the department in 2001. As a Fire Fighter I, he was assigned to stations on Lānaʻi and in Makawao. In 2009 he was promoted to Fire Fighter III, and worked in the Fire Prevention Bureau, as well as on Engine companies in Wailea and Kahului. Javier has been assigned to Hoʻolehua, Molokaʻi for his initial assignment as Captain.

Javier is part of the department’s Community Services Committee. He is a 1992 graduate of Maui High School. Javier and his wife Tiffany live in Kahului, and he has two children and three stepchildren.

Maroe Smith joined the department in 2001. He was assigned to stations in Kaunakakai, Nāpili, Pāʻia, Wailuku and Makawao as a Fire Fighter I. He served as a Fire Fighter II in Kahului on both Haz Mat 10 and Rescue 10. In 2015 he was promoted to Fire Fighter III, working in the Fire Prevention Bureau, as well as on Engine companies in Kīhei and Pāʻia, before returning to the Rescue company in Kahului. As a Captain, Smith has been assigned to Wailea station.

Smith is a 1992 graduate of Seabury Hall and resides in Kula.

Modesto Jacinto Jr. joined to Maui Fire Department in 2005. As a Fire Fighter I, he worked in Makawao, Wailea and Kahului. In 2012 he was promoted to Fire Fighter II, serving on both Haz Mat 10 and Rescue 10. After Jacinto’s 2014 promotion to Fire Fighter III, he served in the Training Bureau and on the Ladder Company in Wailea, before returning to Kahului, working with the Engine, Haz Mat and Rescue companies. With his promotion to Captain, he is assigned to the Wailuku Station.

Jacinto is a 1985 graduate of Baldwin High School. He and his wife Caroline live in Wailuku and have two children.

Michael Mullalley joined the department in 2005, working in Hoʻolehua and on Lānaʻi, as well on both the Engine and Ladder companies in Wailea as a Fire Fighter I. In 2014 he was promoted to Fire Fighter III, assigned to the Pukoʻo station on Molokaʻi, as well as in Nāpili and Wailea. Mullalley will be a Captain at the Kīhei Station.

Mullalley is part of the Fireground Operations and Ocean Safety cadres. He is a 1995 graduate of San Diego State University and completed Fire Science training at Honolulu Community College. Mullalley lives in Kahului with his wife Nancy and their three children.

Robson is the Director of the Department’s Fire Apparatus Driver/Operator Training program and serves as a member of the Strategic Planning Team. He is a 1996 graduate of St. Anthony school, and a 2002 graduate of the University of Hawaiʻi at Manoa. Robson and his wife Kanoeuilani and their two children reside in Wailea.

Michael Howe joined the Maui Fire Department in 2008. As a Fire Fighter I, he was assigned to Wailea and Lahaina stations. In 2016, he was promoted to Fire Fighter III, working at Pukoʻo station, in the Fire Prevention and Training bureaus, as well as working on the Ladder Company in Lahaina. With his promotion to Captain, he has been assigned to Makawao Station.

Howe serves on the department’s Fireground Operations cadre. He is a 2003 graduate of Vancouver Christian High School, and a 2006 graduate of Portland Community College. Howe lives in Lahaina.

All of these promotions went in effect in March 1st, 2020.