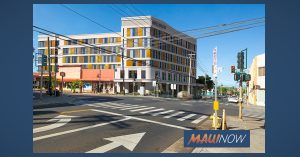 A draft mockup of the 165 room inn that would sit along the corner of Main and Market Streets. Photo Courtesy: Jonathan Starr.

Maui residents will have three opportunities to offer input on a proposed hotel that would sit on the corner of Main and Market Streets in Wailuku.

Landowners Jonathan Starr and Helen Nielsen are hoping the hotel will revitalize the streets and boost the local economy. Others, however, fear it could gentrify one the islandʻs last untouched towns.

“Weʻre looking, first of all, to bring back a piece of Wailukuʻs history,” Starr asserted while describing the vision for his proposed hotel.

But the former county planning commissioner hopes to change that by restoring what he calls the townʻs century-long history of thriving hotels.

Starr also claims the hotel would cater specifically to locals and families traveling for business and special occasions.

“I know it will be a lot, lot less than resort prices,” Starr promised.

On Saturday, the Maui Tomorrow Foundation issued the following statement regarding the hotel:

“Maui is reeling from a major economic downturn related to an historic pandemic, and many of us are looking for thoughtful alternatives to the tourism economy that keeps residents and local businesses exposed to major disruption. Now along comes a proposal for ANOTHER HOTEL…

Most people agree that the historic character and charm of Wailuku needs to be carefully preserved.

Due to the combined efforts of Maui Tomorrow Foundation  and the Wailuku Good Government Coalition, the County of Maui has placed a moratorium on the decision-making authority of the Maui Redevelopment Agency, while the legality of this organization is being challenged.

We are hopeful that this moratorium on decisions by the Maui Redevelopment Agency will give the County Council time to protect the heart and soul of Wailuku town, increase opportunities for truly affordable housing, and prevent damage to one of the last refuges for local residents on Maui. “

A public meeting of the Urban Design Review Board will be held online on Tuesday, June 2, at 10 a.m. to hear public testimony regarding the design aspects of the proposed Hotel Wailuku and its Draft Environmental Assessment (DEA). The meeting will be held via BlueJeans. The Meeting ID is 944270016.

While the Maui Redevelopment Agency (MRA) will not be making any decisions on zoning and variance requests until the County Council decides on the legality of the agency later this year, the MRA will be hearing public testimony on the associated Draft Environmental Assessment (DEA) for the Hotel Wailuku on Thursday, June 4 at 6 p.m. via BlueJeans. The meeting ID is 752149768.

Final comments on the Draft Environmental Assessment for Hotel Wailuku will be due vial email to the Department of Public Works at [email protected] by June 8.