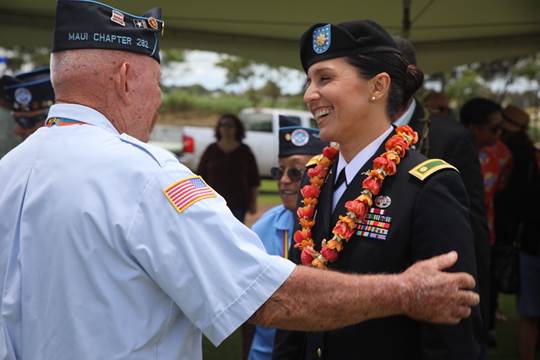 US Rep. Tulsi Gabbard (HI-02), will conduct a portion of her annual Army National Guard training duty from today through Friday.

Rep. Gabbard has served as a Soldier in the Hawaiʻi Army National Guard for more than 17 years and is a veteran of two Middle East deployments.  She will be returning to Washington, D.C. for Congressional hearings and votes on June 23.

“National Guard and Reserve service members across the country balance their family responsibilities, a civilian career or school, and their service commitment to our nation at least one weekend a month and two weeks per year. I am grateful for the opportunity to serve alongside so many who give so much,” said Rep. Tulsi Gabbard.

While on duty, Rep. Gabbard notes that her congressional staff will continue to work on individual constituent casework, coordination with authorities, and on-the-ground efforts to bring relief resources to the people of Hawaiʻi.

In November 2014, Rep. Gabbard was activated and served in Hawaiʻi National Guard efforts as an eruption of Kīlauea lava flow headed toward Pāhoa on Hawaiʻi Island. In May 2018, as lava erupted from fissures throughout Lower Puna neighborhoods, Rep. Gabbard again served to provide support.