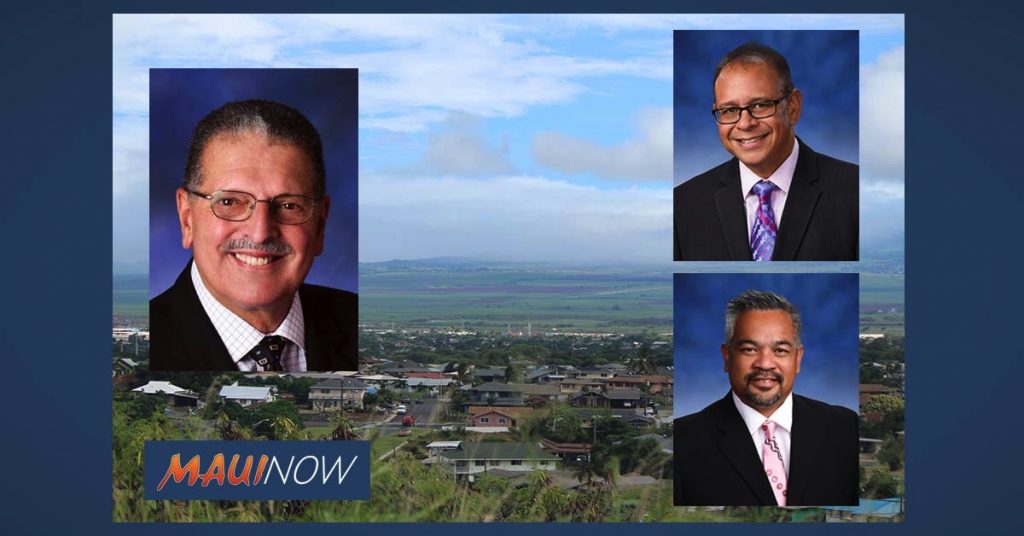 Mayor Victorino said the proposals would inflate the cost of government while Maui’s economy has been battered by the COVID-19 pandemic.

“The bifurcation merely splits the DHHC into two halves and does not create any additional responsibilities or fund the necessary positions required to move housing initiatives forward. The Council ultimately controls the fate of housing projects, regardless of bifurcation,” said Mayor Victorino.

Councilmember Molina said the intent of the proposed resolution is to allow a greater focus on the creation of affordable housing and permit increased concentration on human service needs.

“The Mayor’s comments were overly dramatic, said Molina.  The Mayor should be thanking the Council for providing him the tools to create affordable housing and address human needs.”

The Mayor also criticized the Council for making “changes to the County’s organization without properly analyzing how the amendments will benefit the economy, efficiency and services.”

“Unfortunately, the Mayor’s comments are baseless because the Council’s GET Committee reviewed the matter at three meetings and the Director of DHHC has provided written and oral comments on the proposal,” said Molina.  “The proposal was well vetted by GET and was seen as a necessity, especially during these difficult times, where people are out of work, needing financial assistance and requiring shelter; the timing for this couldn’t have been better.”

The Mayor also noted concerns about the Council’s lack of review of the “benefits to the economy and services”.

According to Molina, the main purpose of the proposal is to have the new Department of Housing (Housing) take a greater role in the creation of dwellings, affordable to families in need.  “If implemented correctly, the proposal will allow Housing to take the initiative as a developer or co-developer for affordable housing,” said Molina.  “Building dwellings will put people back to work, put money in their pockets and boost their moral by providing shelter.”

The Mayor continues on with his criticism by saying the bifurcation “does not create any additional responsibilities or fund the necessary positions required.”

“The proposal spells out and expands the responsibilities of Housing,” said Molina.

Currently, the Charter only identifies three areas of responsibility as it relates to housing. Molina said his proposal increases the new department’s assignments, by:

Molina says the separation of the department could assist with developing affordable housing and address human needs; and said the DHHC Director provided GET with the funding requirements for the new department, creating full vetting of expenditures.

He noted that the council can’t fund expanded positions for the new department until the voters have spoken.

“My record speaks for itself as it relates to affordable housing, I introduced the Affordable Housing Fund, the First-Time Homebuyers Program, the resolution to initiate the Comprehensive Affordable Housing Plan and now a new tool to bifurcate DHHC,” said Molina.

Establishment of a Department of Agriculture:

Regarding the proposed Department of Agriculture, Mayor Victorino said, “This proposal lacks the amount of analyses required to determine what this will cost to residents, the function and responsibilities of the Department, and what other essential initiatives will be cut in order to fund this new department.”

Mayor Victorino also stated, “Agriculture is already a function of the Federal and State governments, and this proposal seeks to create a new department whose main function is simply to interpret related state and federal laws.”

“The Charter Commission, which will assemble in 2021, is the appropriate body to guide and make recommendations for amendments of this magnitude. It is a disservice to the residents of this County to put questions on the ballot that aren’t thoroughly vetted.”

Councilmember Shane Sinenci responded to the criticisms saying, “The Covid-19 pandemic has exposed Maui County’s vulnerability. We have relied on Tourism as our main economic driver. The Department of Agriculture is being proposed to diversify our economy and invest in our own survival– in food security.”

According to Sinenci, more than 1900 residents have signed a petition in support of strengthening the county’s agriculture sector, and more than 150 have written testimony requesting a chance to vote on the charter amendment.

“The resolution provides the basic structure for a county department and is slated for a 2022 rollout date, should it be approved by the electorate,” said Sinenci.   “The mayor can choose how large the department can be. The smallest departments operate under a $2 million budget, and the County already spends $8.5 million towards agricultural grants and programs.”

“We have heard from local farmers that need assistance with State and Federal regulations, and with navigating the grant processes. We have invited all farm groups and communities to participate in creating a department that will assist local farmers, and create ordinances that will provide the specific details for the department,” said Sinenci in an email communication to Maui Now.

“The Council voted the charter amendment out of the GET committee. I am proud of the council members who exhibited the political will and foresight to take on this challenge and build Maui County’s resiliency as we move forward in these unprecedented times,” he said.