Governor David Ige this morning approved Honolulu Mayor Kirk Caldwell’s request for a stay-at-home, work-at-home order for the island of Oʻahu.  Mayor Caldwell said the order goes into effect at midnight 12:01 a.m. on Thursday, Aug. 27, and continues for two weeks.

The information was shared during a morning press conference hosted and live streamed by Mayor Caldwell on Oʻahu.

“We’re going to see how it goes.  We’re hopeful that the number will decline; and on top of the other actions that the people of Oʻahu have taken–whether it be closing of bars, closing down of large gathering spaces in parks and other places, and no gatherings of more than five, on top of this–hopefully we’ll see the number decline to a level where we can manage our contact tracing and everything else that we need to,” said Mayor Caldwell.

Governor David Ige called the daily triple-digit increases in new COVID-19 cases over the past several weeks on Oʻahu “troubling.”  “We know what we need to do and we’ve done it before.  In March and April we were successful in flattening the curve so that we had weeks and weeks of case counts less than 10 all across the state–and we need to get back under control as we move forward in our community,” said Gov. Ige.

“We both agree that reimplementing and re-instituting a stay-at-home order is what Oʻahu needs at this time,” said Gov. Ige, emphasizing that this does not impact the neighbor islands, which remain at their current levels of response.

“This new surge requirement will give us access to 5,000 tests per day… for two weeks. This really allows us to test in areas where we would not otherwise have the opportunity,” said Gov. Ige.  “The normal course of testing during this whole pandemic has been 1,000-2,000 tests per day, so this is a significant increase in the capacity to test individuals, (and) get a broader surveillance so we can see what the circulation of COVID-19 is in our community.”

The partnership for free testing on Oʻahu has a goal of completing 70,000 tests in two weeks.  According to Gov. Ige, the federal government is providing the tests and covering all associated costs. 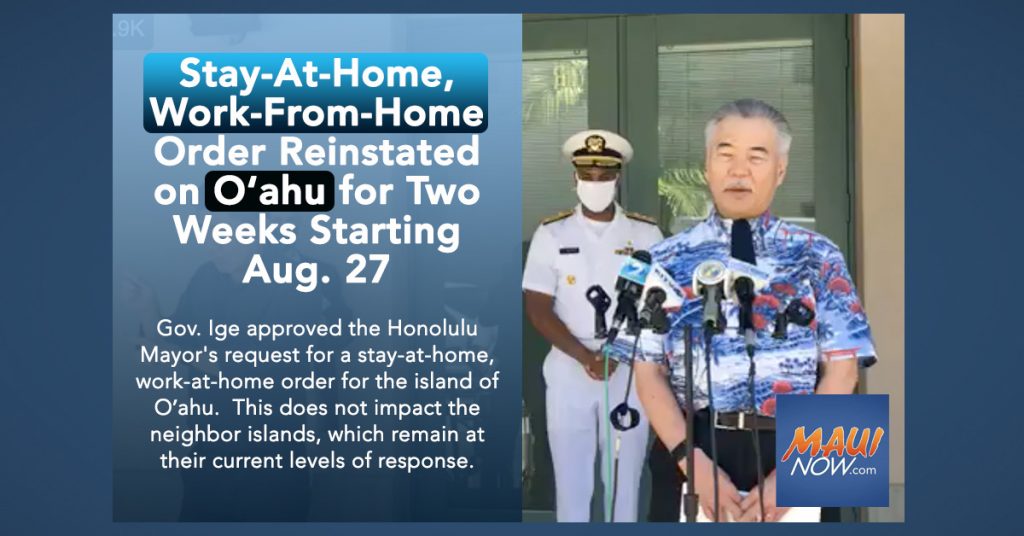