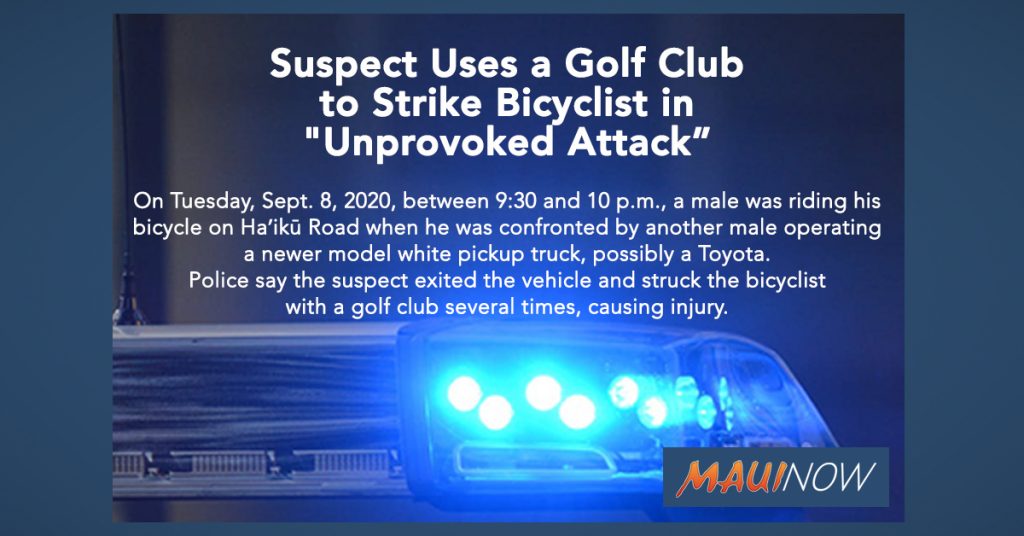 The Maui Police Department is requesting the public’s help in identifying the male involved in an unprovoked attack on a bicyclist in Haʻikū on Tuesday, Sept. 8.

Police say a male was riding his bicycle on Haʻikū Road at between 9:30 and 10 p.m., when he was confronted by another male operating a newer model white pickup truck, possibly a Toyota.  Police say the suspect exited the vehicle and allegedly struck the bicyclist with a golf club several times, causing injury.

The suspect is described as possibly in his early 40s, approximately 5 feet 10 inches, weighs about 160 pounds with brown hair to his neck and blue eyes.  The suspect also had a medium-sized black dog with a white spot on its face in the vehicle with him.

Police say that after assaulting the bicyclist, the suspect left in the Peʻahi-direction on Haʻikū Road.

The public should consider all wanted person(s) as dangerous and is advised against approaching, following or taking other action that could put them in danger.

Individuals wishing to remain anonymous can call Maui Crime Stoppers at (808) 242-6966.  Callers to Crime Stoppers are given a code number.  The organization pays cash rewards of up to $1000 for information leading to the arrest and indictment of individuals responsible for felony crimes, the recovery of stolen property the seizure of illegal drugs in felony cases or the capture of felony fugitives.