Volcano Watch — That Didn’t Feel Like a Magnitude-4? What do Earthquake Measurements Mean? 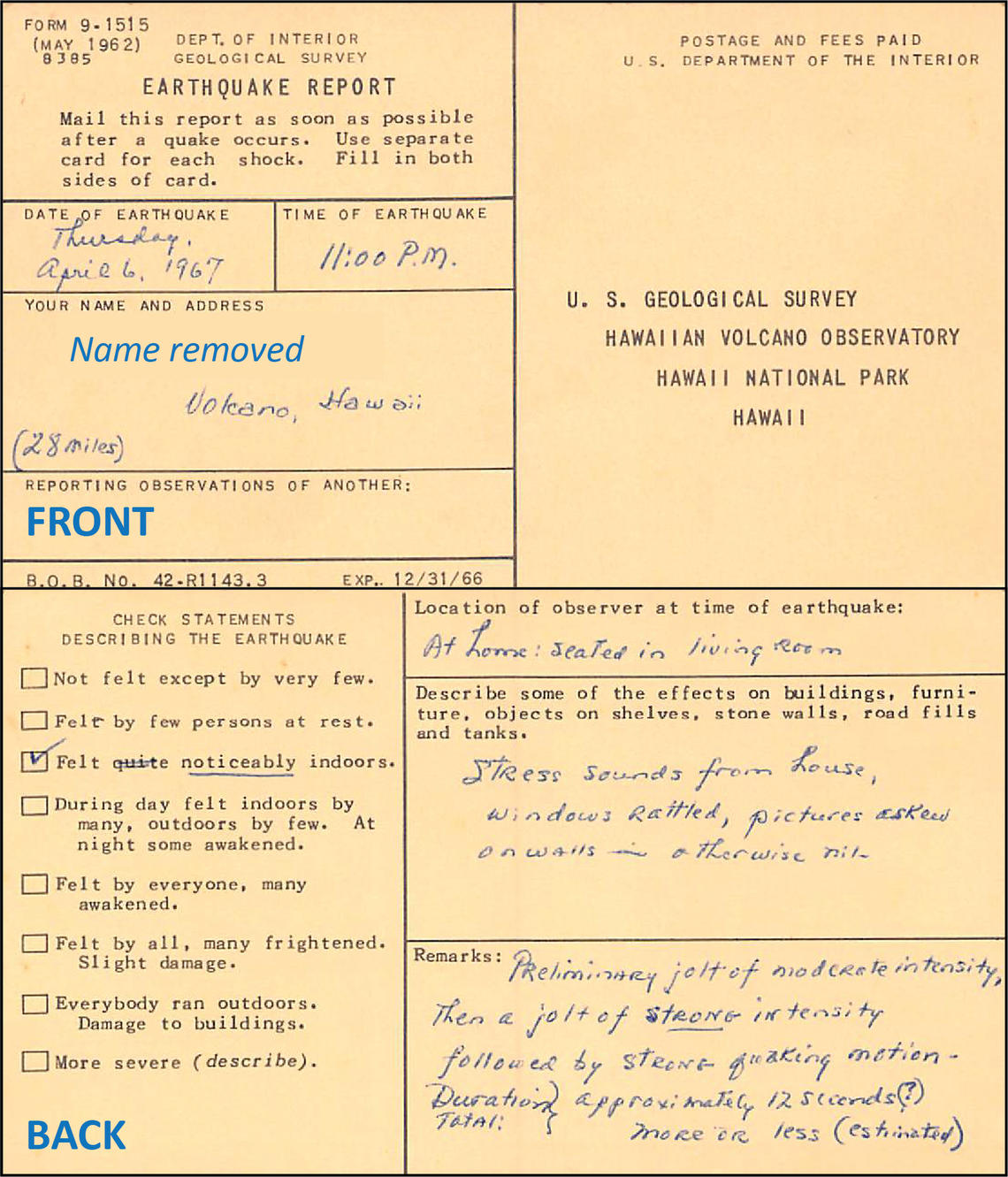 Earthquake report card from 1967 containing detailed information of personally observed effects from a M3.9 earthquake at the summit of Kīlauea. HVO staff distributed the report cards to local citizens between 1930 and 1989. Now, you can go online to report felt earthquakes at https://earthquake.usgs.gov/data/dyfi/. (Public domain.)

By US Geological Survey Hawaiian Volcano Observatory scientists and affiliates

Residents on the Island of Hawaiʻi are accustomed to feeling earthquakes. As the ground shaking subsides and the safety of everyone around is assured, one of the first questions we typically ask is “how big was that earthquake?”

Before seismologists had equipment to calculate magnitudes, people relied on physical damage and human observations. Such observations could be compiled and analyzed to determine where the shaking seemed most intense and identify the epicenter.

By 1930, Hawaiʻi had earthquake report cards that were distributed to the community by HVO staff for people to write detailed information about what they observed during earthquakes.

Earthquake observations recorded in journals and report cards not only became a portal for scientists to look back in time at the historical seismicity, but also provided vital data points that helped determine the intensities of the earthquakes felt in different regions.

In the early 1900s, Italian volcanologist Giuseppe Mercalli developed a scale to categorize the intensity of shaking from an earthquake based on the effects reported by the impacted community.

This scale has since been adopted in the United States as the Modified Mercalli Intensity (MMI) Scale. The MMI scale is one of the most meaningful earthquake measurements in describing the areal extent and severity of the shaking at the surface.

Different seismogenic regions can produce varying levels of intensity from the same magnitude of earthquake, depending on distance from hypocenter, direction of rupture, underlying geology, and even building design. A single large earthquake might have reports that span the entire I-XII range of the MMI scale. 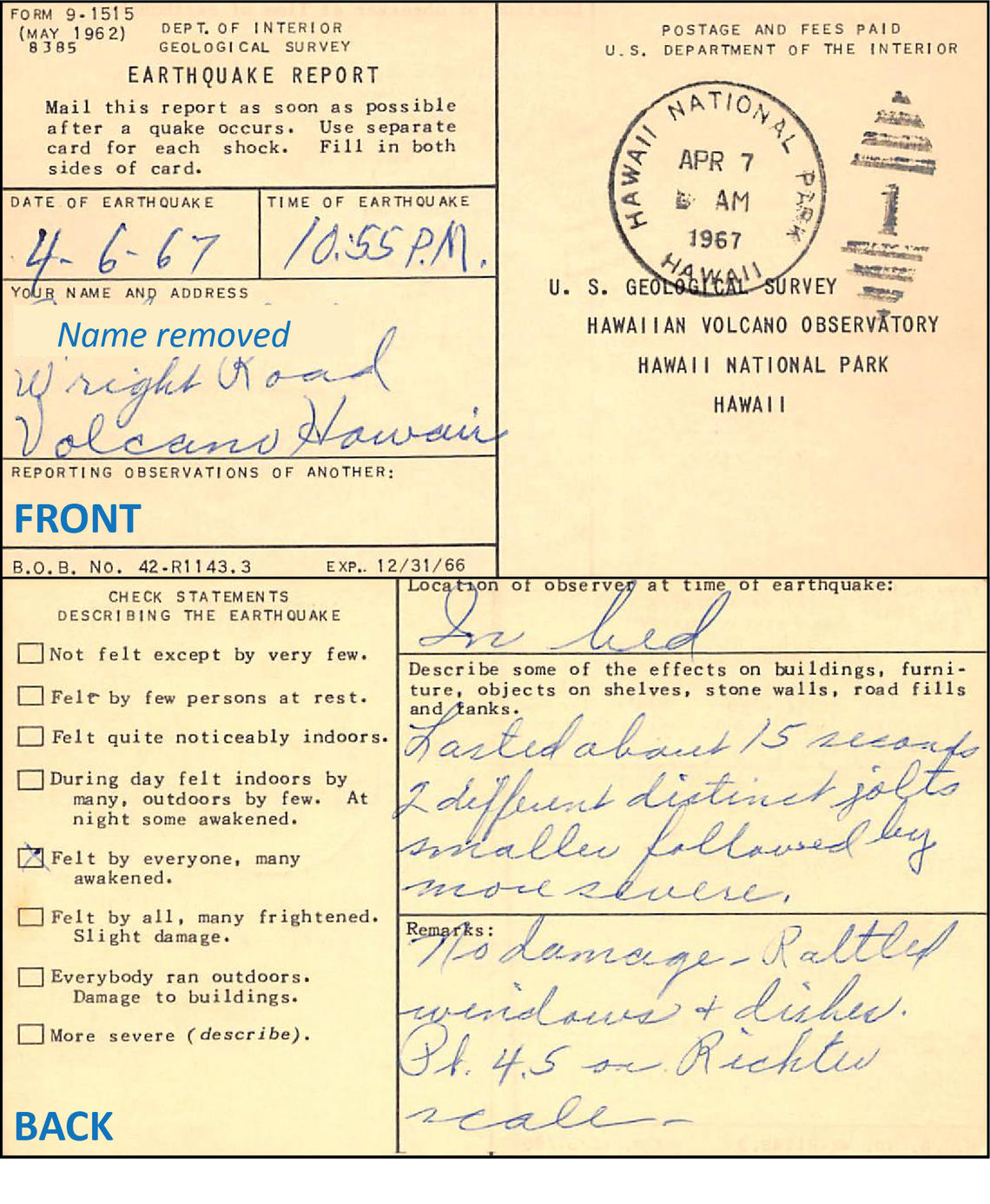 Earthquake report card from 1967 containing detailed information of personally observed effects from a M3.9 earthquake at the summit of Kīlauea. HVO staff distributed the report cards to local citizens between 1930 and 1989. Now, you can go online to report felt earthquakes at https://earthquake.usgs.gov/data/dyfi/. (Public domain.)

This is why the MMI scale is the best way to communicate the relative effects among earthquakes. Values are derived from direct observations of the public and will give the best sense of shaking experienced in different regions.

Today, we no longer provide earthquake report cards but instead you can go online and fill out a “Did You Feel It” (DYFI) report, or even check intensities calculated in your region for older events, based on reported observations.

In the 1930s, seismologist Charles Richter came up with the first known method to describe earthquake size based on the maximum amplitude measured from specific seismographs (instruments that measure earthquakes) deployed in southern California.

Richter defined a magnitude-3 earthquake as producing a 1 mm (3/64 inch) peak swing on a torsion seismograph located 100 km (62 miles) away from the earthquake epicenter. He used this arbitrary designation to simply define size of a specific event and with the assumption that other earthquakes could be much smaller or much larger, he invoked the logarithmic scaling. Also central to Richter’s work was determining how seismic wave amplitudes varied depending on the distance between earthquake and recording seismic station.

The tenfold increase on the Richter scale is simply in regard to that max amplitude measurement on the seismogram, or earthquake-record. Energy release is actually portrayed by Richter magnitude logarithmically to approximately base-32, meaning that each whole magnitude increase releases about 32 times the energy.

Other magnitude scales have developed over time with the same principles of taking a physical measurement from the seismogram to produce an objective value, with the intent of emulating the relationship among earthquakes that Richter established.

The next time you feel an earthquake, take the proper safety precautions. Then—instead of asking how big that earthquake was—fill out your DYFI forms and ask yourself what the intensity was based on your observed effects, and see if the associated magnitude is what you expected.

Kīlauea monitoring data for the month of September show variable but typical rates of seismicity and ground deformation, low rates of sulfur dioxide emissions, and only minor geologic changes since the end of eruptive activity in September 2018. The water lake at the bottom of Halema‘uma‘u continues to slowly expand and deepen.

Mauna Loa is not erupting and remains at Volcano Alert Level ADVISORY. This alert level does not mean that an eruption is imminent or that progression to eruption from current level of unrest is certain.

This past week, about 115 small-magnitude earthquakes were recorded beneath the upper-elevations of Mauna Loa; most of these occurred at shallow depths of less than 8 kilometers (about 5 miles). Global Positioning System (GPS) measurements show long-term slowly increasing summit inflation, consistent with magma supply to the volcano’s shallow storage system. Gas concentrations and fumarole temperatures as measured at both Sulphur Cone and the summit remain stable. Webcams show no changes to the landscape.