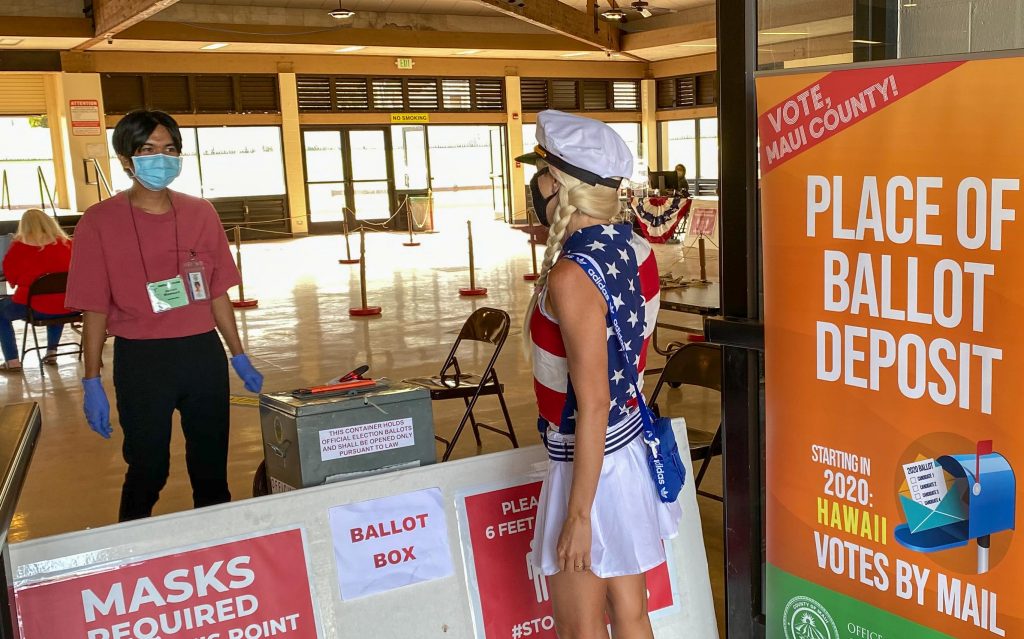 Tiffany Moore went to the Voting Service Center in Wailuku to ensure her vote was counted. Photo Credit: Cammy Clark

Tiffany Moore of Kihei was so excited to cast her ballot Wednesday for the Nov. 3 election that she dressed for the occasion with her “special voting outfit” of a red, white and blue shirt, white skirt and captain’s hat.

“I got my ballot in the mail, but I wanted to vote in person because I think it’s safer,” Moore said.

Election Day is less than two weeks away. And, for the first time in a general election, Hawaiʻi is using all-mail balloting. In Maui County, County Clerk Kathy Kaohu said voting is going “smoothly” so far with 27,350 of the 96,882 active registered voters (28.23 percent) already casting their ballots.

On Oct. 8, Kaohu said 92,711 ballots were sent to voters in the first mail drop. Since then, other ballots have been mailed to absentee voters who are at one-time addresses, including colleges or temporary lodging on the mainland. Some ballots have been mailed to voters whose registrations have come through forms built into applications at the Department of Motor Vehicles or the federal SNAP nutrition program.

Any registered voters who have not received their ballots by now should call the Office of the County Clerk at 808-270-7749.

As of Wednesday, there are 107,933 registered voters in Maui County, but about 11,000 are considered inactive for a variety of reasons, including: no voting activity for awhile, undeliverable addresses, deceased people who have not yet been officially cleared off voter roles, and people who have moved away from the County without notifying the County.

“A lot of people donʻt know that voter registration doesn’t follow them through life like a Social Security number,” Kaohu said. 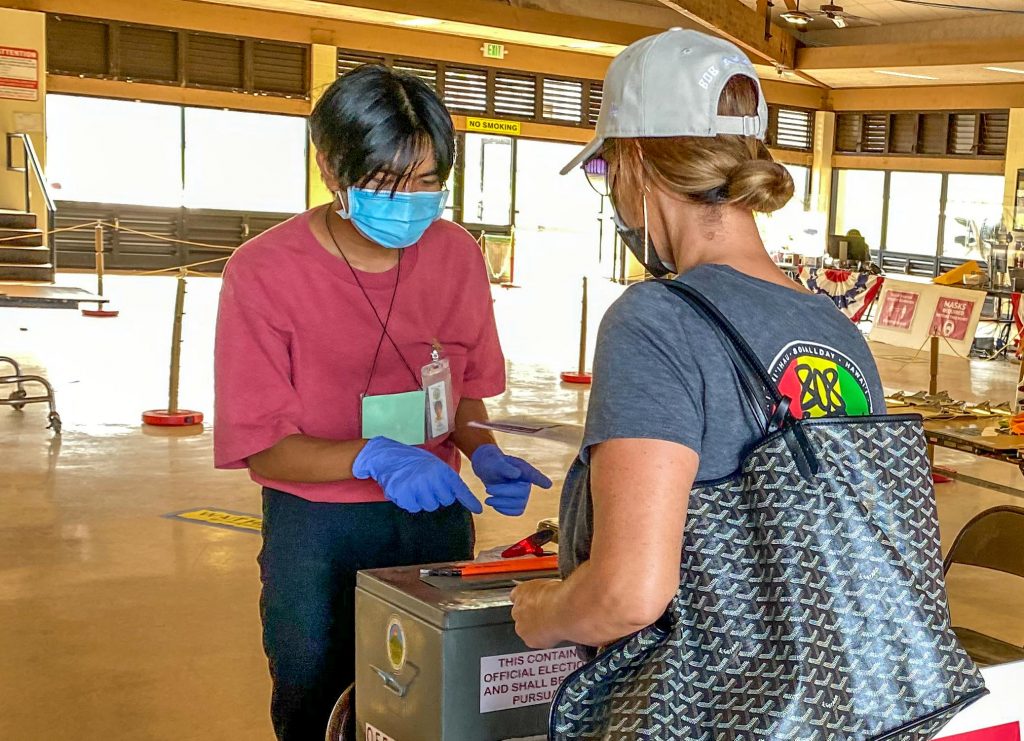 A voter drops off her ballot at the Voting Service Center in Wailuku. Photo Credit: Cammy Clark

For people who want to vote in the general election but missed the Oct. 5 registration deadline to vote by mail, it’s not too late. Maui residents 18 years or older still can register in person at one of the following three Voter Service Centers:

It’s also is still not too late to request an absentee ballot. The deadline is Oct. 27.

Ballots must be received by 7 p.m. on Election Day to be counted – these include all ballots that are mailed. Kaohu emphasized that state law mandates that just being post marked by Nov. 3 is not valid in Hawaiʻi like it is in other states.

To ensure a ballot arrives in time, Maui County residents can drop off a ballot at the Voter Service Centers or at “Places of Deposit,” which are located at:

Kaohu said that the numbers of voters using the drop off boxes has been “robust,” but so far she has found the US Postal Service to be timely with deliveries within Maui County.

To ensure ballots arrive in time by the US Postal Service, the state elections office recommends mailing ballots no later than Tuesday, Oct. 27, and the earlier the better, especially if voters are sending their ballots from outside the island.

Hawaiʻi is the fifth state to use all-mail balloting. The first was Oregon in 1998, followed by Washington, Colorado and Utah.

Hawaiʻi has had low voter turnout for decades and in the 2018 mid term elections it was the lowest in the nation at just 39 percent. With the hopes of increasing voter turnout, Gov. David Ige signed the all-mail balloting into law in June 2019. Election officials had about eight months to make the transition before the 2020 election cycle.

“When the state switched to all mail, nobody had a clue of what was to come with the [COVID-19] pandemic,” Kaohu said. “You canʻt just flick a switch and go from a polling structure to all mail overnight. I feel bad for the states that had to make the automatic switch due to COVID unlike us who already was going down that path.”

Kaohu said a lot of work occurred during the transition months to “clean up data bases and make them as accurate as possible.”

Still, there will be some ballots mailed to registered voters who no longer are Maui residents. One case is a ballot mailed to Taylor Schumacher that ended up in the mailbox of his former landlord, Robert Hollifield, in Kihei.

“My tenant moved off island about 3 or 4 years ago,” Hollifield said. “I saved the ballot  because I did not know what to do with it.”

Kaohu said that in cases where ballots are mailed to people who no longer live at the address that they should be marked “No Longer Live Here” and returned by the US Postal Service.

Kaohu said by law ballots that are not deliverable to voters’ registered address can not be forwarded to new addresses on file with the US Postal Service. For all ballots that are returned undeliverable or marked No Longer Live Here, election workers attempt to notify those voters.

To ensure ballots are counted, voters must sign their ballot. For unsigned ballots and those with signatures that don’t appear to match the voter’s registration, election workers will attempt to contact the voter to get a signature or make sure it is a valid ballot before invalidating ballots.

In Hawai’I, unlike some other states, ballots WILL count if they do not include the privacy sleeve.

For the 2020 primary, Maui County had a 42.7 percent turnout, with only 697 people voting in person of the 43,954 ballots cast. All the rest were either mailed or put into official drop boxes.

Early voting turnout for the general election already is extremely high around the country for an election that is expected to see high turnout. Kaohu said she would love to see a 60 percent turnout for Maui County. With the presidential race and increased attention to the Maui County charter amendment proposals and the local races, Kaohu thinks it could be reached.