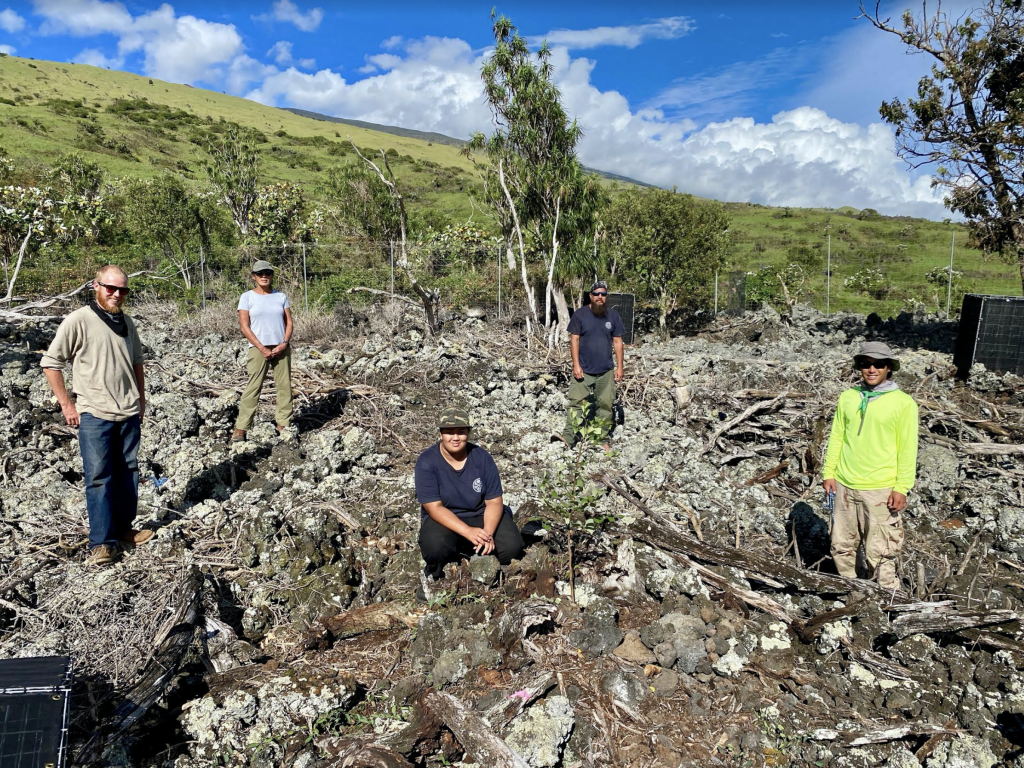 A small group from the Auwahi Forest Restoration Project gathered on the leeward slopes of Haleakalā to return six seedlings of one of the rarest trees in the world, mēhamehame (Flueggea neowawraea) back to the wild. In doing this, the global population of this tree species was increased by 12%.

Mēhamehame was once one of Hawai’i’s tallest canopy trees, reaching heights of almost 100 feet with trunks 7 feet in diameter. Because of the combined impacts of fire, feral ungulates, and invasive plants, Hawaiian dry forests have been reduced to about 2.5% of their former range, usually consisting of forest fragments in landscapes now dominated by non-native vegetation.

Mēhamehame has now been reduced to less than 50 wild trees on four Hawaiian Islands (Kaua’i, O’ahu, Maui, and Hawai’i island). Part of the decline of mēhamehame is due to the impacts of the invasive stem-killing beetle, the black twig borer (Xylosandrus compactus), which arrived in Hawai`i in the 1970s.

As a result, mēhamehame is classified as Endangered by the US Fish and Wildlife Service and Critically Endangered by the International Union for the Conservation of Nature (IUCN), a category defined as ‘at extremely high risk of extinction in the wild.’

In 2017, a collaborative effort was initiated in an attempt to prevent extinction of the mēhamehame on Maui. In 2019, the Auwahi Forest Restoration Project (Auwahi project) and landowner Ulupalakua Ranch, with funding from the US Fish and Wildlife Service Private Partner’s Program, constructed a new exclosure protecting two mēhamehame individuals, representing two-thirds of Maui’s mēhamehame population.

After unusually heavy summer rains of 2018, Auwahi project crew was able to collect about a dozen mēhamehame fruit. From these, native plant propagator Anna Palomino, of the Olinda Rare Plant Facility, renowned for her expertise in cultivating native species, was able to germinate and grow six seedlings of this notoriously difficult-to-propagate species.

On October 28th, after years of planning, the six mēhamehame seedlings were carefully transported and planted near two of the last wild mēhamehame trees at the remote site on southwestern Haleakalā volcano, Maui island.

The planting of these six seedlings went well, with one participant noting ‘a combination of excitement, of the unknown, of also being brave in the face of the unknown, knowing that although failure is always possible, so is over the top success.’ The intention of this effort is to establish the first breeding population of mēhamehame in over a century on a small remote lava field on the leeward slopes of Haleakalā volcano. Hopefully, mēhamehame will secure its survival and establish the basis in future years to help regain the footing of one endangered Hawaiian tree in a modern and changing world.

Due to Covid-19 concerns, the public currently cannot participate in this effort. As soon as volunteer trips resume in 2021-2022, there will be an opportunity to visit and work at this site as well as in the Auwahi project’s other three native forest restoration areas. Working with ʻUlupalakua Ranch, the Auwahi project directly involves local communities in ecological restoration of native forests, believing community involvement in today’s world is an essential element of durable conservation efforts.