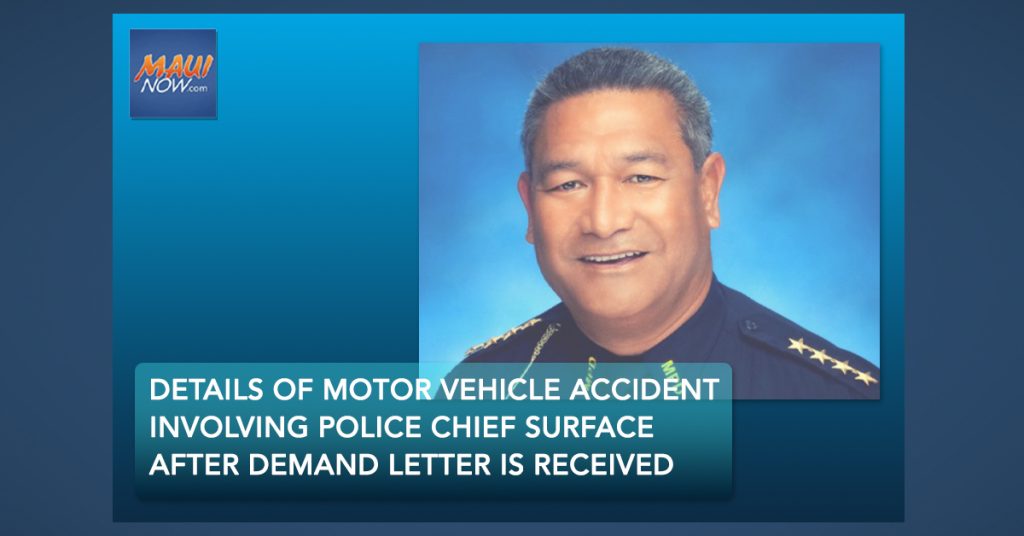 Maui police have released information on a motor vehicle accident involving Maui Police Chief Tivoli Faaumu after receiving a demand letter earlier this week from an unknown source, and a video of the incident surfaced online today.

Police say an anonymous letter was received by the Maui Police Department  on Monday Nov. 16, 2020 at about 11:06 a.m., “demanding the retirement of Chief Tivoli Faaumu, or a letter would be sent to the County Council, Police Commission, Mayor, SHOPO and Media Outlets citing alleged mistreatment of his employees, and a vehicle accident where he left the scene, and no case was made against him.”

Police say the letter further indicated “if no announcement is made by Dec. 1, the letter would be sent as said.”

On Wednesday, Nov. 18, 2020 a video was posted to the internet with the title “Maui Police Department – Chief of Police –Hit and Run.”

Police say an investigation reveals that on Saturday, Nov. 7, 2020 at about 5 p.m., the male owner reported his motorcycle had damages to the rear fender.   The motorcycle was parked unattended within a mall in Kahului.

Review of the surveillance footage revealed a white truck bearing Hawaiʻi license plate LKB627 reversed into the motorcycle, then drove away. The driver of the truck was later identified as Police Chief Tivoli Faaumu.

Chief Faaumu provided a statement and the necessary documentation for the accident report, according to a police press release issued this afternoon.   The damages to both vehicles are estimated at less than $3,000, according to police reports, and a report documenting the accident was filed.

Police issued a press release saying, “This is a reminder that accident can happen anytime and with anyone.  Please drive safely. Maui Police Department will continue serve and protect the people of Maui County, investigate cases and hold all personnel accountable.  Rest assure Maui Police Department is committed, if further investigation into this incident is warranted, it will be done.”

Maui Mayor Michael Victorino responded to our request for comment on Wednesday afternoon saying the incident is under investigation.  “The Chief had reported it to me and I understand what’s going on; and I’ll let the due process take its course,” said Mayor Victorino.