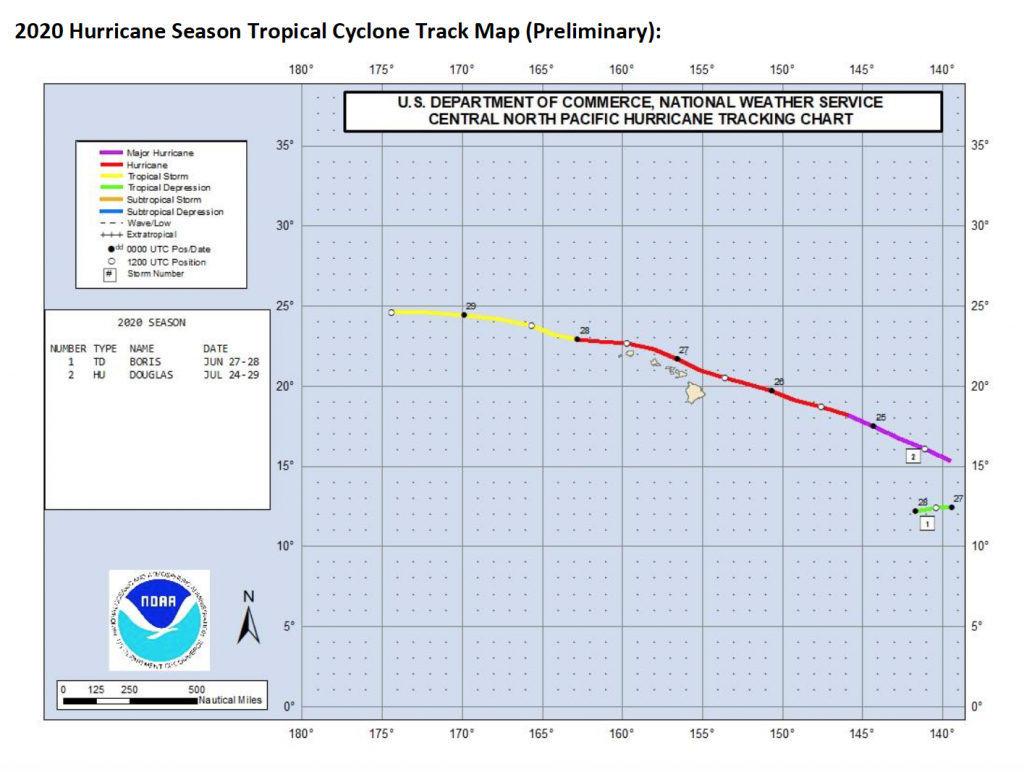 The Central Pacific basin had two tropical cyclones — below the seasonal average — for the 2020 hurricane season that runs from June 1 to Nov. 30.

During an average year, there are 4 to 5 tropical cyclones that occur in the Central Pacific basin, which extends from 140°W to the International Date Line north of the equator.

Hurricane Douglas entered the basin on July 24 as a category 4 major hurricane on the Saffir-Simpson Hurricane Wind Scale. Douglas quickly and steadily tracked to the west-northwest toward Hawaiʻi and gradually weakened, eventually passing within 30 miles north of the state on July 26 as a category 1 hurricane. Douglas weakened to a remnant low on July 29, shortly before crossing the International Date Line into the western Pacific basin. (Note: the dates provided are Universal Coordinated Time [UTC], which is 10 hours ahead of Hawaiʻi Standard Time.)

Impacts to the State of Hawaiʻi: Hurricane Douglas passed just north of the state, keeping the most damaging wind and rain impacts away from land. Swells from Douglas brought high surf across east-facing shores beginning July 25. Debris from high surf closed Kamehameha Highway near Kaaawa in windward Oahu for a time on the afternoon of July 26.

Heavy rain occurred over portions of the state on July 26, south of Douglas’s track, with no significant property damage or injuries reported. Additional information about wind gust and rainfall totals from Hurricane Douglas is available here:
https://www.weather.gov/hfo/hurricanedouglassummary

Hurricane Season Outlook: NOAA’s 2020 hurricane season outlook issued on May 20, 2020, called for two to six tropical cyclones in the Central Pacific basin, with a 75 percent chance of near-to-below-normal tropical cyclone activity and a 25 percent chance of above-normal activity. The 2020 season started with ENSO-neutral conditions in the equatorial Pacific that were expected to continue through the summer, with a potential transition to La Niña. Equatorial ocean temperatures steadily cooled during the summer, leading the Climate Prediction Center to declare that La Niña conditions were present in August.